Flash gets a facelift

Last week and weekend, T and I got the front end damage on Flash (the TDI Jetta) repaired.  Today's post covers that epic. 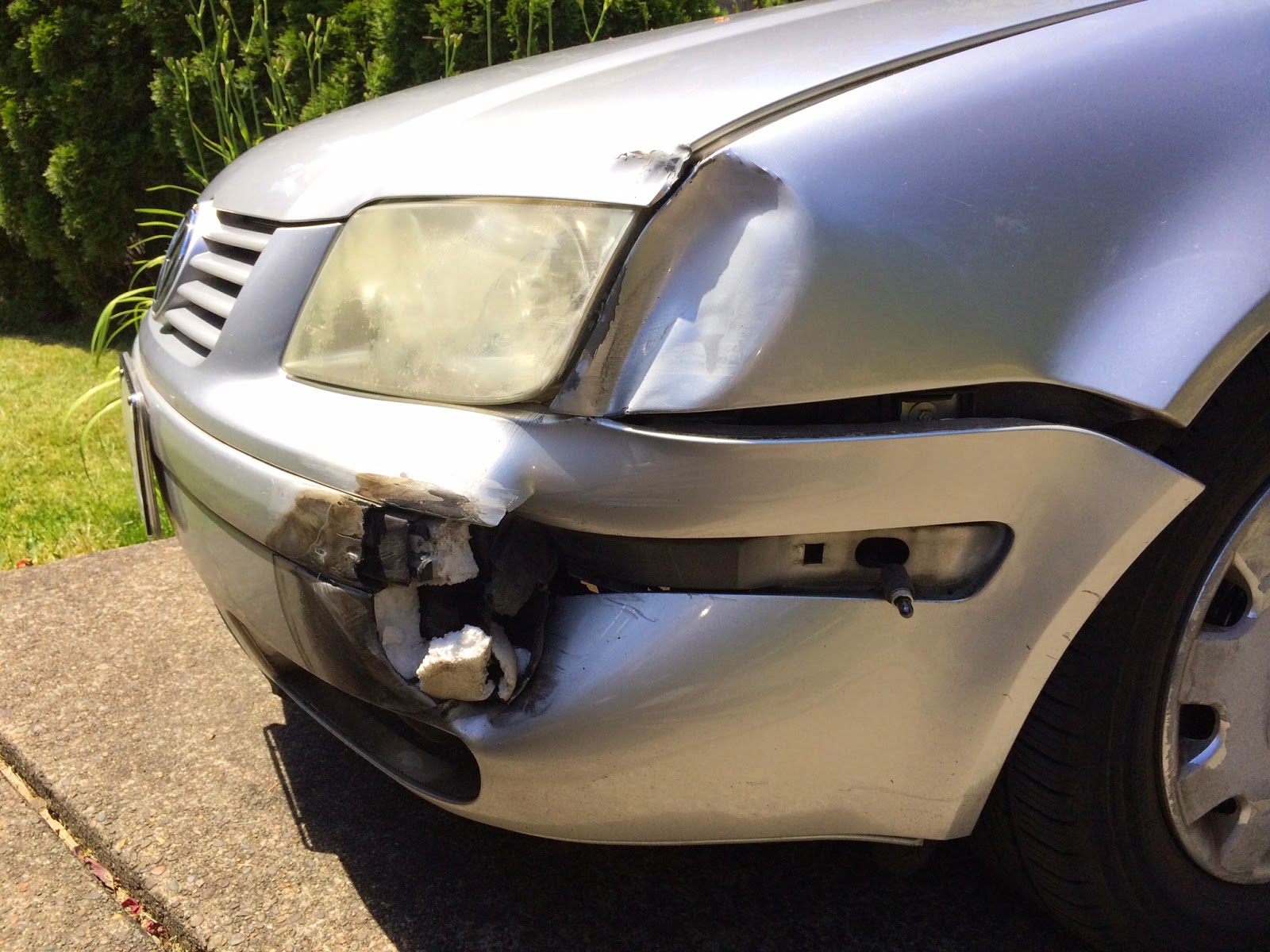 I should probably start at the beginning.  In mid-May, T was asked by his mom to drive his brother from their house in LO to my house in Beaverton for C's lacrosse stuff and then on to his 6:PM lacrosse game in Camby.  This led to 2 hours of rush-hour rubber-band driving, terminating in the chaos of intersections around Camby High School.  It was in one of those intersections, T got into an accident with an uninsured driver resulting in damage to the left-side fender, front bumper and the corner-edge of the hood (see picture to the right, here).  We left Flash like that for the next couple of months.  After buying and then changing our minds about a parts car (See: Welcome 2dot0), I re-doubled efforts to get Flash fixed.

Steal Your Face Right off Your, uh, Head 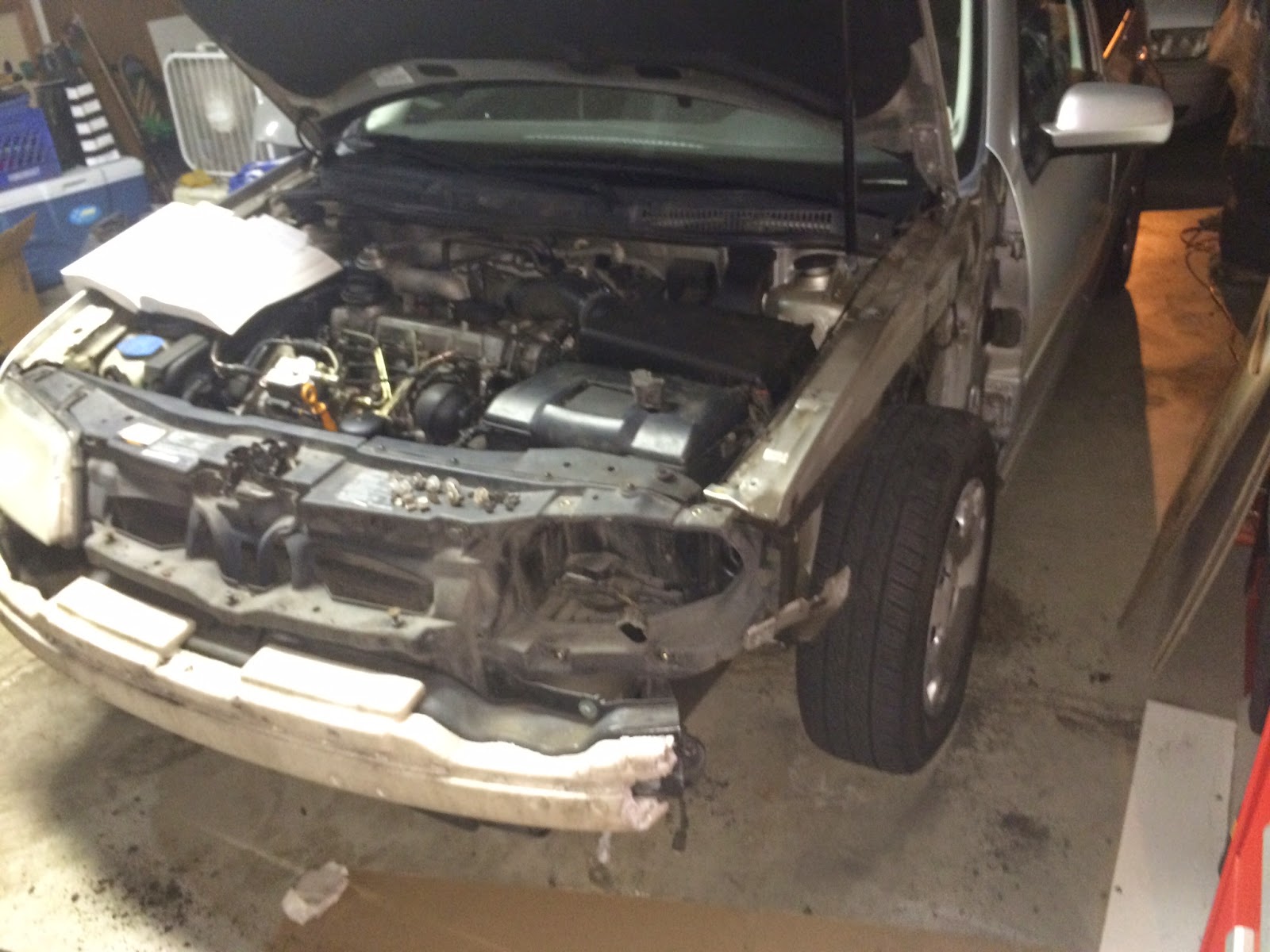 In a 95* garage last Tuesday, I set off to remove the damaged parts from Flash.  The shop manual is helpful for things like this, but it seemed like every "first" step was to follow a series of steps elsewhere in the manual.  Once the hood is up, the front latch is removed first by releasing the spring and then placing a slotted screwdriver into the Y and rotating it.  The plastic Y will pop off the nubs attached to the metal latch so it can be pulled straight out through the front grille.  The grille simply pops out by tilting the top forward.  If you still have your lower grills, they would be removed now; mine were lost in the accident.  Now, all of the star-driver bolts holding the front fender should be visible.  Remove the star-driver bolts from the bumper-ends which attach the bumper to the inner wheel wells first.  Then, remove the 2 lower bolts through the lower grille holes.  Last, remove the star-driver bolts accessible from above.  The bumper pops right off.

All of the above is necessary to just get to the fender.  But you can't take the fender off yet.  First, you need to remove the inner wheel well.  It is held on with more star-driver screws around the outer edge and one buried deep near the front strut.  Once you've wrestled the wheel well out of your way, the fender can be removed with a standard 10mm rachet.  The 4 bolts across the top are obvious.  There are 2 more at the front, and 3 buried at the rear.  The middle one of the "rear" on Flash had body filler slathered on it, so I had to dig that away first.  We discovered the plastic parts of the headlight were broken at this point, so we removed that too. 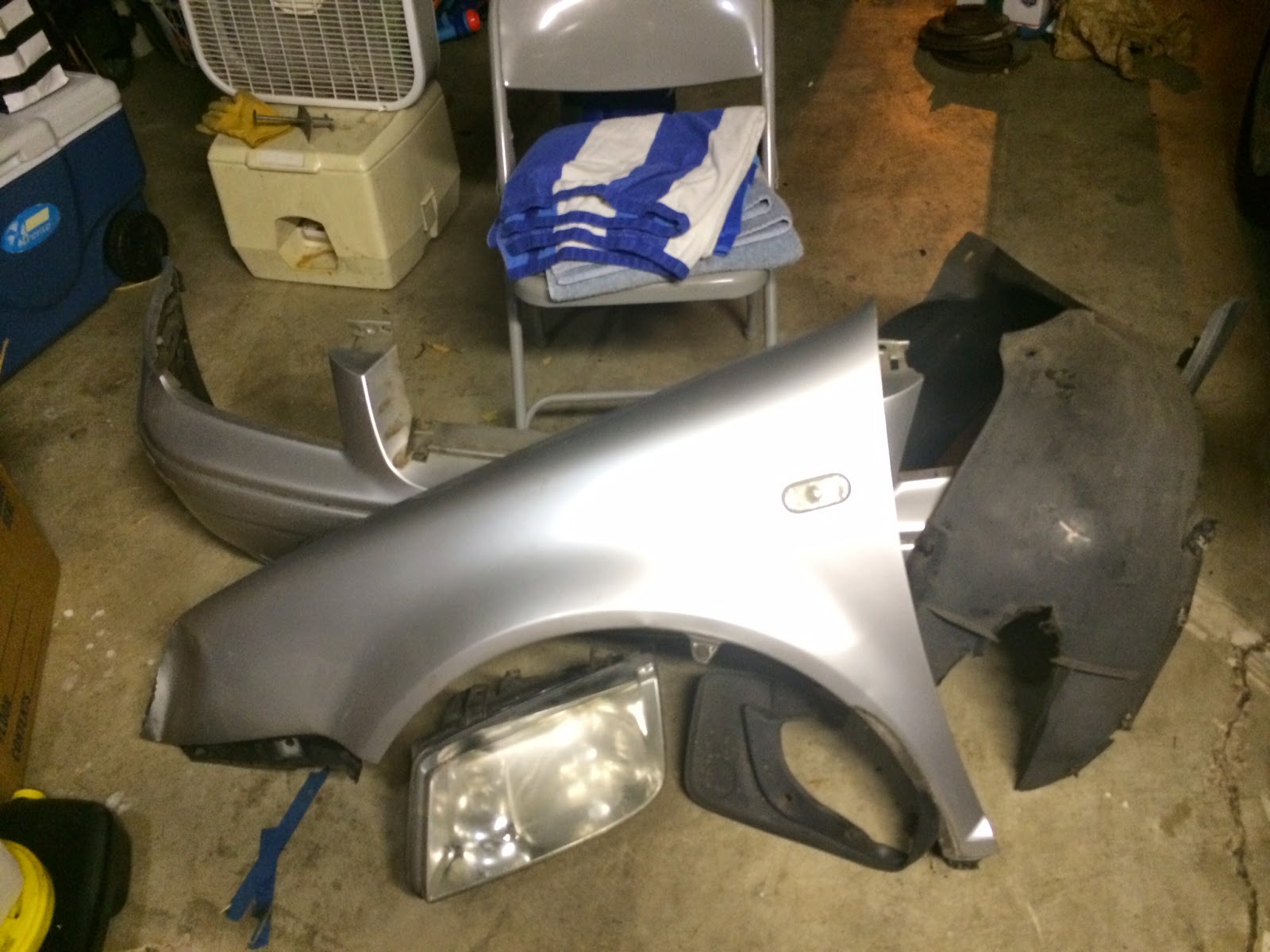 Wednesday, T and I drove Hapy to a wrecking yard, looking for body panels.  Turns out, Jetta's don't last in the yard too long.  One had been in the yard for just over a week and the front end was gone.  The others had been there longer and were even more picked over.  We did find a 1/3 rear-seat back, though.  The latch on Flash's had broken at Home Depot months ago, and was effectively locked in place.  Removing the replacement was easy: just pitch it forward, and with a screwdriver rotate the collar near the door to expose the opening.  Then, just tilt the back towards the center of the car, freeing that end.  The center just slides out.
For T, it was his first trip to a wrecking yard, and we had a blast.  He saw a few cars he had never seen before, like a late 70's Honda CVCC that he really liked.  While we didn't get the body parts we needed, it was still a good time. 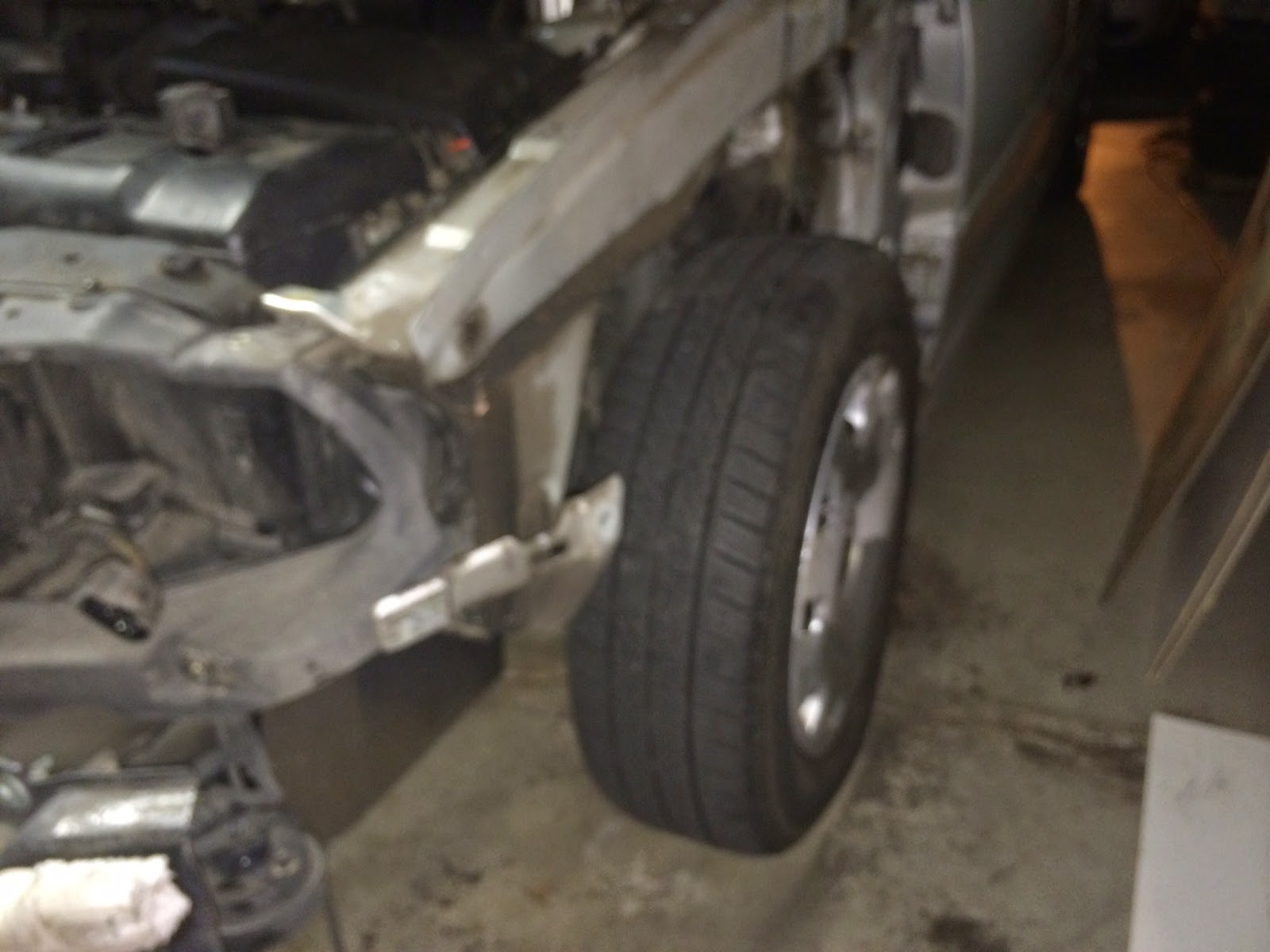 The following night (Thursday), I got a response from one of my craiglist part queries.  Since he lived in the countryside outside Vancouver, WA, we agreed to meet at the IKEA near the Portland airport.  I took both T&C with me, and we got there a little early.  So, we went into the A/C to wander and wait.  The seller ended up about an hour late, but having not been at an IKEA for years, we had an unexpected tour.  They displayed a small-house set up of 590 square feet that all three of us found very interesting.  It seemed like every wall had storage solutions on it.  I remembered IKEA having much more disposable furniture made of veneer and glue-board than we saw.  What really tripped me out was how we walked in with no agenda, no real needs or wants, but by the end, we could feel the covet creeping in.  We found ourselves genuinely shopping for furnishings, and looking for particular things.  Fortunately, we recognized it, and quickly made for the exit.  We met "bumper buy" in the parking lot, accepted his bumper and pair of headlights for the arranged amount and headed home. 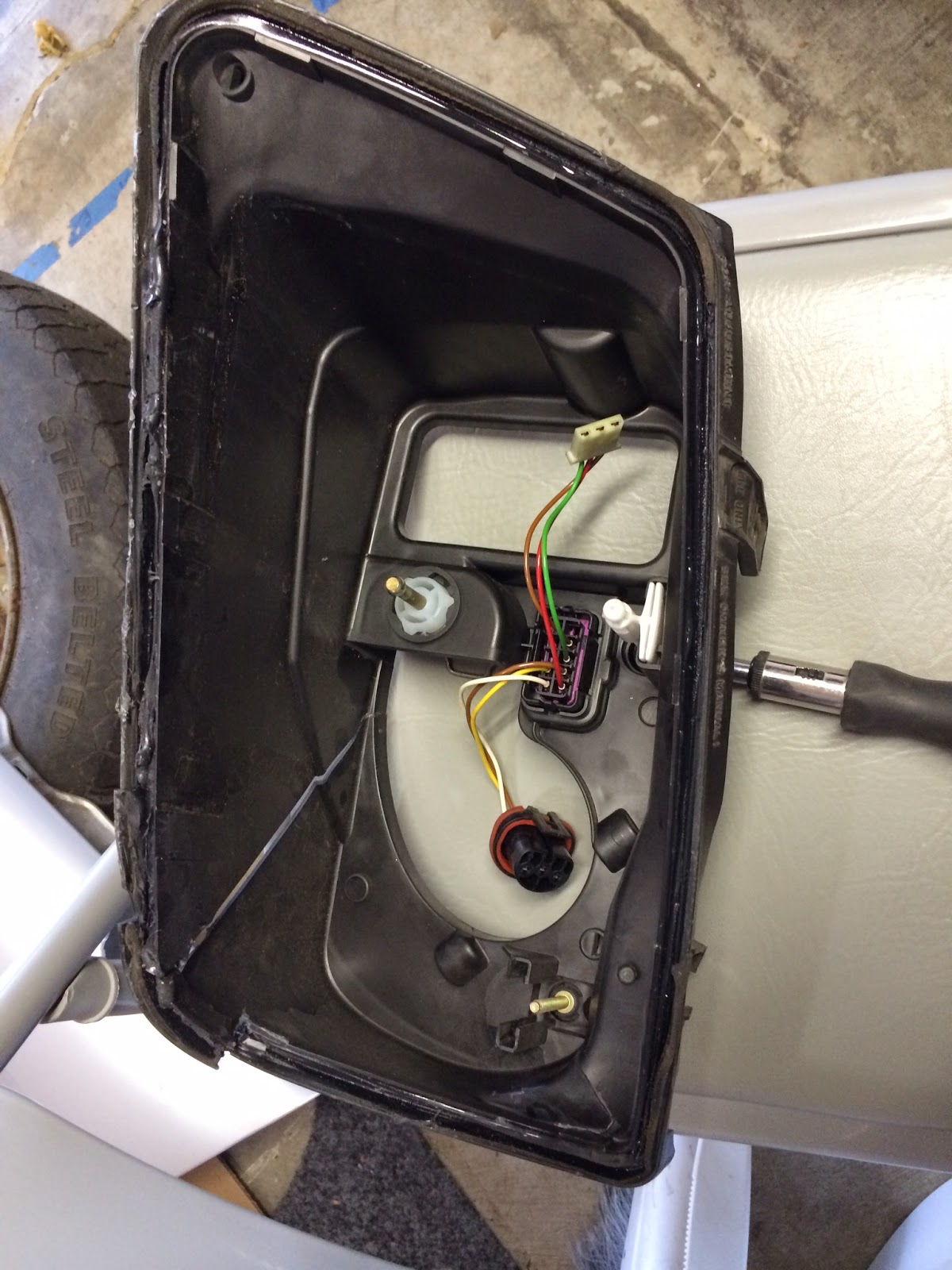 On Saturday, T and I started the work on installing the headlight and bumper.  Turned out, the headlights we got were GTI headlights, and the plugs were all different.  Additionally, the physical attachment point for the main headlight in the silver-flashy plastic was different.  We cannibalized the wiring and silver-flashy from the old headlight and the clear plastic and housing from the new-to-us one.  The head-lamp plug, though, couldn't fit through the housing, so I had to cut and re-wire a little bit.

Getting Hammered
Since we only had a bumper, we needed to make some ghetto adjustments to the fender and hood to fit properly.  Using an old spare tire from the bus as an anvil, I hammered on the fender to get most of the disfigurement out.  The rubber hammer and anvil worked really well, actually.  Don't get me wrong, it still looks bad; it just fits around the headlight, bumper and hood now.  At the end, I beat on the corner of the hood to get it to fit a little better as well. 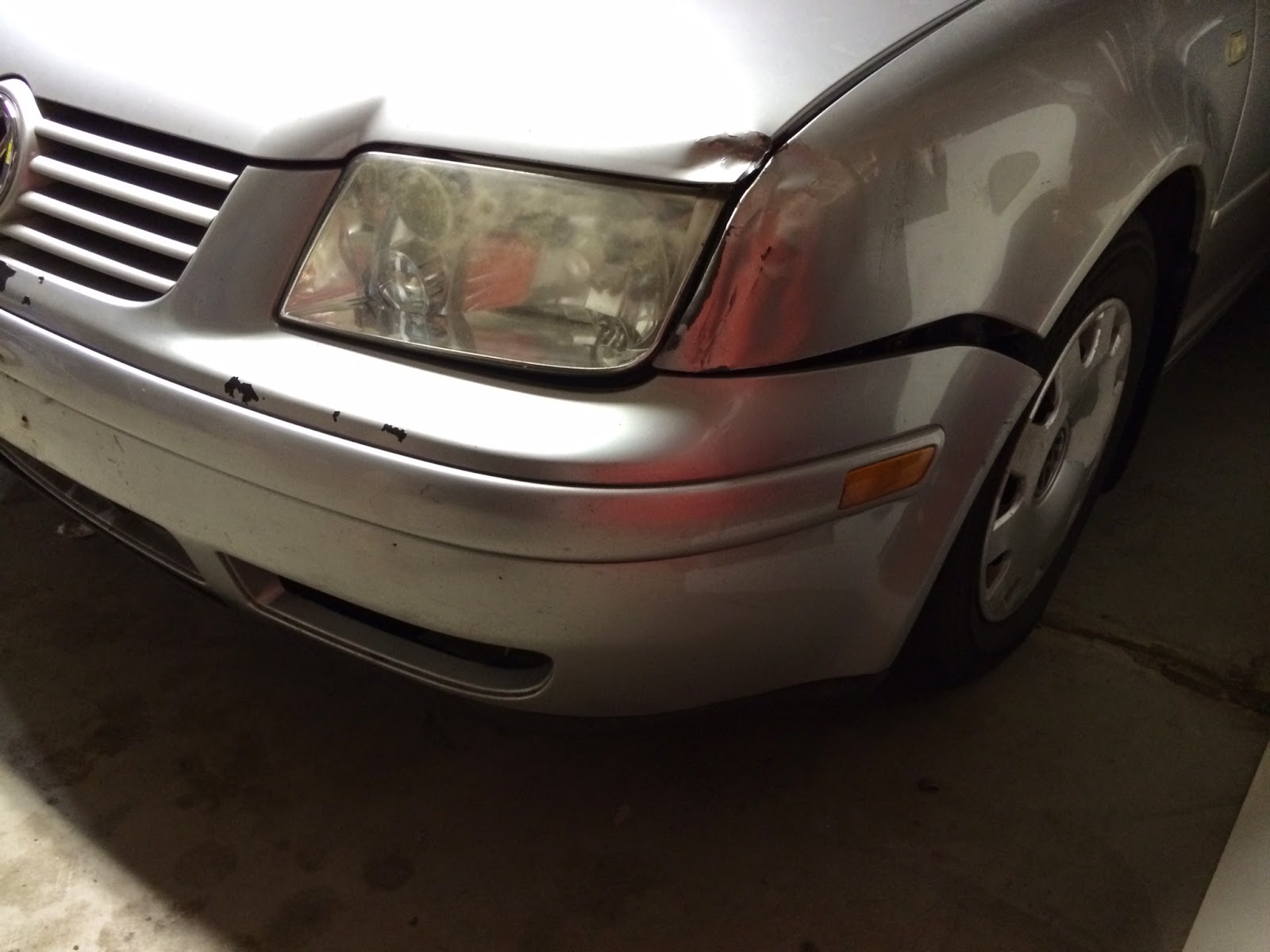 As we did final assembly, we discovered that the front driver-side bumper mount/support was damaged in the accident.  Its a $20 part, but we didn't have it.  So, we put the front end together without it, knowing we'll need to remove and re-install stuff when we get the new fender anyway.  Also, the headlight housing and plastic screen need to be caulked to keep water out.  I need to do that before the weather changes.  I don't like the idea of the fender hanging out there anyway, so if I don't get a replacement fender soon, I'll swap out the mount/support and do the caulking anyway.

That's it for today.  Have a great weekend, and, as always, thanks for following along...
Posted by PdxPaulie at 10:48 AM