Mental Notes Get Lost Too

Back when I was going through the electrical stuff, there were a few things that I didn't identify from the ETKA diagrams.  Basically, they weren't in the drawings.  If you aren't familiar with the ETKA, its a software program that has drawings of sections of VW and Audi (and a few other non-US vehicles) vehicles.  Included in the drawings, there are drawings of the wiring cables with the plugs, and even a brief description of what the plug is (or may be) connected to.  Unfortunately, some of the plugs on my harnesses are not on the drawings.  When I encountered these, I said "I'll figure that out later".  Well... later is now, for some of them.  I'll get to that along the way, but first a few things I've done over the last couple of weeks.
Prep for Starting
I figured fluids were the next logical step, assuming everything was ready to go.  After getting back from another weekend camping on the Oregon Coast, I grabbed a couple gallons of distilled water and a gallon of diesel, and headed for the bus.  The oil was pretty simple.  Since the engine orientation is the same in the bus as it is in the stock vehicle, its just a matter of pouring it in the fill hole and checking the levels.  I should need to add a little more once it has been started, since there is no oil pressured into any of the lines. Justin and I have already talked about changing the oil pretty soon after the first start anyway since the engine has sat so long.  I then used a mity-vac to force diesel into the large filter from both sides.  It didn't seem like much got in, but we'll see.  Last, coolant.  2 1.5L bottles of PentaFrost(++) G12 and 3L of distilled water.  I suspect some air pockets, so I have an extra bottle of coolant and more distilled water.  Seemed like I was ready...
Tuesday with Justin
After getting things as close as I thought I could get the bus for a test start, I reached out to Justin (TDI guru) to help me with the initial start of the bus.  He stopped in after work on Tuesday, and we set to looking at where we're at.  He seemed pretty pleased with the layout so we set to trying the electrical.  Our initial tests were very positive - the ECU (or DFI, in the wiring diagrams) didn't fry; it powered up when the ignition was switched to "run", and we were able to run VAG-COM diagnosis on it.  Unfortunately, we got a few codes, and we were unable to get the dashpod to recognize power.  I'll detail the codes below, as I am still getting those codes.  When Justin left, he said "keep looking for the cause, and when you get the dash to show you the milage when the battery is hooked up, you're ready for me".
Small Success
Justin and I worked until twilight trying to find the power break that was causing the dashpod to fail.  Today, I traced the wires from the glow plug relay and realized that they terminated in one of those plugs I couldn't find in the ETKA.  I then ran my fingers along the cable bundle from the glow plugs towards the ECU and found a corresponding 2-prong plug.  I plugged them together and re-tested what happens when the battery is tied in again.  I saw milage on the dashpod.  Sweet!  Just to satisfy curiosity I hooked up my freeware VAG-COM to see if any of the codes went away.  Nope.  Ah well... more to look into next time around.  If you recognize any pattern in the codes, please let me know.  I noticed that all of the offending sensors are in the same harness, and some of them tie together.  More when there's more...
VAG-COM error output:
01050 - Glow Plug monitor intermittent
01268 - Quantity Adjuster Upper Limit (N146)
01268 - Quantity Adjuster Lower Limit (N146)
00765 - Modulating Piston Movement Sensor (G149) Intermittent
00522 - Engine Coolant Temp Sensor Open or Short to +
00626 - Glow Plug Indicator Open or Short to Ground Intermittent
Posted by PdxPaulie at 10:05 PM No comments:

After that last posting, I had Monday off. I was planning to drive my son T to camp, but last minute his mom chose to car-pool to camp, so I had the day with my other son, C. C spent most of the day playing outside in the neighborhood with his friends (checking in on me from time to time), so I suddenly had a bunch of time to finish things up... or so I thought.

Ignition control
After digging through the wiring diagrams and internet advice, I settled on my own way of dealing with triggering the ignition. I decided that the best way to 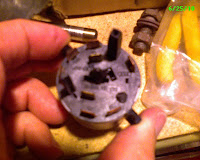 pretend the key was turning was to connect the circuits with relays that are triggered from the original switch. To make this possible, I took apart the NewBeetle ignition switch. This is actually much easier than you'd think. 2 tiny bolts and the switch mechanism comes apart. This allowed me to test which pin showed resistance when the key was turned. From this, I drew a diagram (which was then confirmed with my friend's drawing). With 2 Radio Shack relays, I wired up the corresponding sockets in the ignition switch plug (in the main harness) so that when the bus ignition is turned to run, the "15" circuit, the lights circuit and the warning buzzer circuits are all fed power from "30". When the bus key is turned to start, the 50b circuit and the "15" are powered from the "30".

Grounding
There are many many ground wires in the TDI engine stuff. 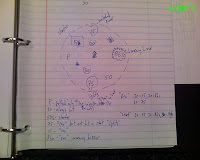 Many, if not most, wire together into big bundles with ring terminals on them. Many wires, though, were cut as I removed chunks of the harness, so I had to wire these back into the mix. Also, there were the grounds for the 2 relays that I added above. I simply drilled a hole in the body inside the westy closet and threaded a bolt through from the underside (above fuel tank on driver side). The ring terminals dropped onto the bolt and I threaded a nut on top. Easy peasey.

Coolant Shmoolant
I went back to the engine bay to admire my work and mess around with the vacuum (move the ball so there's more room for the air intake) when I noticed that the bracket that I fab'd for holding the coolant bottle was broken. Me bad welder. Rather than grid it all down and re-weld it, I cut 2 new tabs from some 1" steel bar I had lying around and riveted them 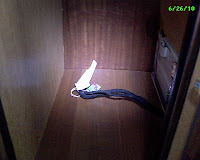 into place. I figured that if they start to get wobbly, I can always lay down some weld along the edges. While I had the bottle out, I decided to get the temperature sensor in the coolant-to-radiator send line rotated and tied into the electrical system. So, I did that too. Funny how just looking at something creates a few hours of work.

Now, I feel like I'm where I said I was in my last post: very close. I have ordered some intake rubber so I can tie-in the MAF (Mass Air Flow) sensor and an air filter. I thought I had an air filter solution, but it won't fit, so I'm looking at ordering a cheap import cone filter for now. We'll see. Meanwhile, I've made contact with my old friend Justin to come over for the initial firing of the engine. We should be ready for that in a couple of weeks. I figure I need some time to get the fluid in, but also to get the intake completed. I'd like to clean up the wire mess in the westy closet, but now that I have a cover for it, I doubt that will ever happen. I will at least verify the relays and fuses before I start it up though.

I'll post again when there's some thing interesting gonig on. I'm off camping tomorrow night with C, so I don't think the bus will get much of a look-see until next week.

Pictures:
top - the inside of the ignition switch, showing the pins
middle - my diagram for what pin corresponds to which slot in the ignition plug
bottom - the inside of the westy closet with the cover in place. the 2 wires are for the NB dashpod. There's another one (not visible in the picture) of the OBDII plug.
Posted by PdxPaulie at 7:17 PM 1 comment:

Someone once told me that it was a fear of success that prevented us from trying things, not a fear of failure. The theory goes that if you fail, you end up exactly where you are now. Since we already know what "now" feels like, it isn't scary. Quite the opposite, actually, its the comfort of the "now" that keeps us bound within it. When we choose to not apply for that promotion, or try that project it isn't because we are afraid that we will fail to make it. We are afraid of the life-change that comes with it, and it is from that place of fear that we make our choice. This is why so many things are left undone, why so few people actually enter politics and why so few people have started a VW bus TDI transplant.

"Okay", sez you, "assuming this is the straight poop, how did you overcome this fear?". Great question. Honestly, when I started this project I didn't realize how big it was. I bought the engine with a monetary win-fall (paid to stop working at an awful company), and then started working through the implications. Let's just say I was too stupid to realize that I should be afraid of failing, much less succeeding. So, why am I bringing this up today? Well, today, I started realizing just how close I am to being finished, so now I am starting to feel that fear of success.

Rolling this back, I spent most of the day today at BBQ's and picnics, talking to friends and family. In each case, at some point, someone would inevitably ask "how's the bus". I found myself saying "good.. good", but thinking... "man, I am almost done". So, why didn't I say that? Well, the number of people that know about this project has grown considerably. The folks in the neighborhood are talking about "a parade" when I get it running. That's kinda scary on a few levels, but most personally, that is a degree of expectation that I hadn't realized. There are literally hundreds of people watching and waiting on this project. So, the stakes are a little bit higher than I thought.

So, to answer the root question of "where am I at": the major electrical work is done. I have to set a few grounds, and I'm ready to test the electrical system with the computer installed. I still have to wire-up the LED's, and figure out a coolant temperature gauge for the dash. Otherwise, it's just filling fluids and testing it out; so I'm basically a few hours work from a test start.

Enter the fear of success.

What will success look like? Selling off my daily driver? Camping trips and drive-in movies? Will this really have a tangible impact beyond getting a chunk of spare time back? Crazy. It is hard to believe the journey is so close to an end, yet, depending on the perspective, the journey is about to begin.

Have a happy Summer, enjoy your opportunities and, today, have a happy Independence Day-
Posted by PdxPaulie at 7:52 PM 1 comment: