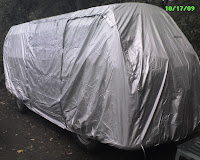 e Oregonians exhibit, finishing the engine mount tower and some new discoveries on the electrical side. I usually do a couple of hours on Thursdays, but this Thursday I was totally beat, so I swapped this afternoon instead. Here's a picture of the bus with that fancy cover from BusDepot I mentioned in the last post. It has zippered doors for both front doors and on both sides for a slider (UK model has it on the other side). It works great so far. No musty smell, no water. Dandy.

Oregon Historical Society
I had a couple of hours today after returning from checking out the Oregon Historical Society's new Native Oregonians exhibit. The exhibit just opened, and there were native artists on-hand to talk about their work with museum visitors. It was very cool. We learned about how the ceremonial drums are made, and how cooking baskets are used. Of course, there was a large collection of bead work and costuming. 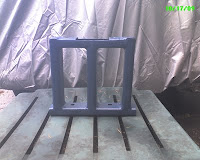 When we got home from the Oregon Historical Society, I got to work on the engine mount tower that Hal has been working on. We agreed that I'd hit it with the grinder the next time I got some time. So, I ground down the "cap" that he welded on at the end of the day last Sunday. I filed on the insides of the uprights where they meet the top and bottom. Finally, I shot it with some blue paint. It should be ready for install tomorrow.

Drive-by-Wire
I mentioned that Hal and I got started on the drive-by-wire last week. I attached a couple of photos of th 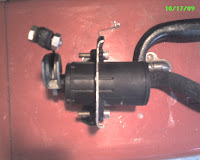 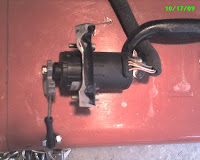 The picture on the right is positioned as if you were looking down through the floor at the top of it. The picture on the left is how it will look from below. It is important to note that we removed more material than we had originally anticipated, so I'm not sure if there's enough left for drilling the holes for mounting. We may have to extend those small silver pieces so we have do. The thing pointing towards the top of the left-hand picture is the "rubber bit" that the accelerator pedal will connect to.

VSS - Vehicle Speed Sensor
I was fortunate enough to find a VSS manufacturer in the Netherlands that was willing to ship one to me here in the states. I got a model 391. Unfortunately, these sensors have the push-on connector and the 1972 VW Transporter has the screw-on kind. I'll be looking into replacing Hapy's speedo cable with one that has a push-on connector -or- figuring out a way of getting the screw-on bit to mate with the push-on VSS. The push-on connector was available in 1981 on the air-cooled vanagon, so it might fit the bus wheel and be long enough to get behind the dash. Time for research.

More after tomorrow's work with Hal. I'm not sure what we'll be working on, but we have the dog bone and the cooling system as well as electrical bits to deal with. I suspect we'll get the engine mount in, and then get the drive-by-wire isntalled. What comes next?
Posted by PdxPaulie at 5:54 PM