In my last posting, I detailed some or most of the dis-assembly of a jalousie (jealous) window.  Today, I'll cover the rest of the tear-down and the re-assembly.  Fun stuff. 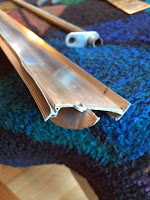 Some of the old seals are, quite frankly, brutal to get out.  In particular, the seals that run along the drip-edge on the top and the bottom edge are especially nasty.  I described hammering on the top (drip edge) seal with a chisel in my last post.  The bottom edge was more accessible, but the old seal had really attached itself.  I spent literally 4+ hours getting that seal out.  In fact, from the opening kick through the final score of the SF 49ers - Seattle Seahawk game I was working on that seal (plus over an hour the day before).  Ok, enough complaining.  Just be advised that some seals are just challenging.  The best tools are a putty knife, a thin-blade screwdriver and a small hammer to smack on the handles and drive the seal out. 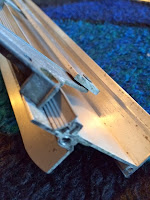 The rebuild kit (kit URL) from Wolfsberg West contains 4 types of seals: the grey outer seal, the drip-edge, the glass-to-metal u-shaped seals and a long spool of a "T"-shaped seal for all the openings.  I skipped the u-shaped ones, because those seals are completely fine on mine.  The glass frames separate the same way as the main frames: Phillip's head bolts from top & bottom at each end.  I found installing the seals to be similarly easy for some, hard for others.  Oddly enough, the ones which were easy to get out were the hardest to put in and vice-versa.  The drip-edge and bottom "T" seal were easy: start at one end, thread it in to start and then pull with a pair of needle-nose pliers.  For orientation of the "T" shaped seals, the flat half should be on the inner-side of the opening and the stripped edge should be on the outer-side.  To install the "T" seals on the sides, you will need to fiddle the louvers up and down while feeding the seal through.  I found a putty knife was a useful way of creating a tiny space between the louver arm and the seal channel so I could slide the seal through.

New Cranks
Before putting the window back together, the new crank mechanism needs to be installed.  I hit the hardware store on the way home from work and picked up 2-pairs of fastener sets: 4mm*20mm bolt, 4mm locknut, 2 washers.  These fit perfectly through the crank-control and the window side.  There are 4 holes in the control, but only 3 in the window frame.  Use the 2 which are diagonal from each other.  Otherwise, the bolt
head will interrupt the operation of the crank.  Orient the bolt so the nut is on the outside of the window for the same reason.  Put on the crank handle and tighten it down.  Rotate the handle (moving the controller) all the way open.p

Putting The Crank Back Together

Okay, so the seals are in, the metal polished (sorta) and the glass has been cleaned.  We're ready to put it all back together again.  First, grab the louver control arm.  It needs to have the 2 little tabs that look like old can pull tabs put back on the arm, if they aren't already.  They need to point the same way.  Take the rod and fit it into the crank / controller thing such that the pull-tab looking thing points towards the outside of the window and upwards.  Push the louvers up as if the window was all the way open.  Now, pull the C-clip off the louver control arm, slide the pull-tab thing onto the end and return the C-clip.  Repeat the process on the other end of the control arm.  I may be overly laboring this description, but this is key to getting your window to work right.  Once the louvers are connected, assemble the lower half of the window. 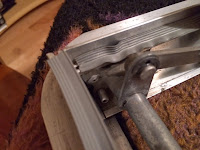 At this point, you have a control rod barely holding 2 louver control parts together.  Grab the lower window frame and set it into place, lining up the outer window edges.  The screw holes and channels should line right up.  Thread in the 4 screws, checking the alignment along the way.  Before you torque them all the way down, check the movement of the louvers with the crank handle.  Next, start installing the glass panes from bottom to top.  These should fit right in, bolting in 2 bolts at each end.  I found it was easier to do the bolt further from the hinge first.  Once its most of the way in, start the bolt near the hinge.  After the top pane is in, crank the window closed and then install the top of the frame.  The drip-edge rubber, at least in my case, really wants to flop under the top glass pane.  So, check that as you thread in the screws, and then tighten them down.  Now, the window is back in one piece.  Next step: re-install.  I have some painting to do first (if the weather ever gets above freezing again), so it may be a while before I post that part.

That's it for today.  Thanks for following along!

Posted by PdxPaulie at 9:30 PM No comments: