and in the darkness bind them

Darkness is my new enemy. Clip lights and flashlights are only so effective for much visibility, and eventually you have to stop for the dark. In the Pacific NorthWest, like anywhere north of the 45th parallel, it is starting to get dark earlier and earlier. 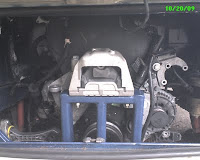 Daylight savings is due in a few weeks and that will effectively kill evening bus work that can't happen in the garage or with clip lights (read: welding). On Sunday, for example, it was full dark by 6:30, so we were not able to get very much done. Hemmed in by darkness, I'm not sure how I'll schedule the work into the Winter, but the momentum is too good to let up now. Today's post covers the engine mount tower install, and talking through some inter cooler placement options. Last, the untangling of the wiring harness has begun.

Tower in Hal arrived around a quarter to 5. We talked a bit about progress on his bus (and mine), and about the weather, while he got caffeinated. Once juiced, we got the freshly painted tower re-installed, and everything tightened down nicely. 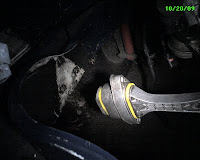 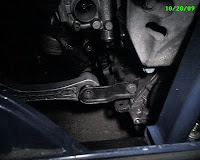 We even got the bumper brackets back on. Since we still have lots of rolling under the back-end ahead of us, we'll leave the bumper off. I'm not sure the blue paint was the right choice, but I didn't have enough black, so it'll do for now. We grabbed the dog bone and started thinking about how to tie that in meaningfully. Just for thinks, we bolted it onto the side of the block (see picture). I'm of the opinion that we'll want it to point the other way and we'll want to bolt both holes into the frame on the side. Either that, or we'll need to fab up some bracket on the block-side. I don't think we want to concentrate that much torque onto one bolt hole.

Inter cooler As we arranged the dog bone, we got to talking about the turbo and how the air -to- air inter-cooler was going to fit into the space. Figure, the compressed air will leave the turbo pointing almost straight down. It is 14" away from the intake manifold at the top of the engine which points straight back towards the rear. Between these 2 points, a square inter cooler must live. The preference is to have the routes as short and straight as possible. Well, the inter cooler intake will have at least a 90* bend in it, and from all my looking at it, the inter cooler output will have at least a 45* angle on it. Of course, we have to figure that putting it right next to the block will put it directly above the exhaust. Radiant heat would make the inter cooler relatively ineffective, so I'm going to have to add pipe to locate it away from the exhaust.
On my Jetta, the inter cooler appears in the front tire well. I wonder if I could cut a square section out of the rear driver-side tire well and locate the inter cooler there. It would be out of the air stream from the rad (if its under belly) and it would be removed from the radiant heat of the exhaust system. It would extend the pipes, and probably add a few more bends into the compressed air stream, though. I'll be thinking on this some more. I may have to consider messing with the turbo so the compressed air side points away from the block instead of down. I'm not sure how involved this would be.

Wiring Harness Before Hal arrived, I had spent a couple of hours thinking over the wiring harness I received with the engine. I pulled some of the other electrical components that I had, like the instrument cluster, the drive-by-wire resistor, the brake 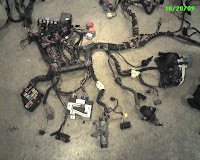 switch, etc, and started plugging them into the harness now spread across my garage floor. I'll be spending my idle time at night going through the ETKA and the Bentley to figure out what each of the plugs is for. I hope to find a smooth resolution for those bits I don't need. Some parts, I suppose, I'll have to find online, and figure out a way of tying them in. Last, there will be on-bus parts that I may want / need the computer to be aware of. I am pretty certain that I'll be retrofitting the Beetle instrument cluster into the bus dash, so I'll need a way of communicating the fuel level and directionals, and such. At some point, I am going to have to figure out where the ECU will go, and how I will extend the circuitry to the front of the bus. That'll come.
Posted by PdxPaulie at 9:32 PM