All bus content today. I'm going to go over how to modify the early bay-window bus windshield washer system from the original air-pressure system to one using a more modern pump. Well, this got really long, so I'm splitting it up into multiple posts instead.

Original Set-Up
For starters, we'll reference the picture on the RAtwell site (re-posted here). Although the system in the picture is for a later bay, most of this is the same for the early bus. The biggest difference is in the valve in the lower left corner. The late-bay windshield wipers and washer controls are on a stalk attached to the steering column. The early-bay controls are a switch contraption on the dashboard next to the hazard light switch. It is round, and the user twists the knob to turn on the wipers... and pushes a button in the center of the switch to activate the valve.
The valve allows pressurized water, air, soap through the lines from the bottle out to the nozzles on the front of the bus. The bottle on the far right sits just in front of the front passenger's foot-well. The long hose runs out the bottom of the tank and ties into the valve I just described. The short hose that looks like its coming out of the top of the bottle is, again, a little different from the early-bus, but the purpose is the same: connect a bicycle pump to that so you can pressurize the tank, and, accordingly, the system.  In the early bus, the air hose attaches to the tank like the other hose does on the bottom of the tank: press onto a nipple and them cinch it down with a plastic threaded nut.

So, with that orientation, you can probably imagine how well the system works or doesn't work after 40 years of recurring owner neglect. On my bus, the rubber lines had been cut out or at least cut up so pumping the tank just sprayed its contents all over the electrical a behind the dash. Fun. The tank doesn't usually fail, but the valves can. Or so I've been told. There are a few changes to modernize the system.

Scope of Mod
First and most important is how to incorporate an electrical switch without disrupting the original dash or spirit of operation? The original button should remain with magic behind it so it at least looks the same. To work, you need a SPST (single pole, single throw) NO (normal-open) biased (push-on, release-off) switch. The switch in the door is kind of like this except it's NC (normal-closed) and creates a circuit when the button pops out. I spent quite a bit of time researching this, and what kinds of switches were readily available. You can get a cheap one, or even a set of 2 or 4 from RadioShack.

They will eventually fail, and "eventually" may not be that far off based on how much current they can handle. I was concerned with how hardy these switches are, especially with how hard the switch will be to get to once installed. Instead, I paid as much for one McMaster-Carr switch as 4 RadioShack ones. This is why I didn't solder wires and instead used insulated connectors: I didn't want to fry the switch with a soldering iron.

Second, if we want the VW to remain totally a VW, we should use a VW pump. That's actually pretty easy, and yes, I know I have already angered the purists with my bus, but this modification shouldn't be verboten by them, IMHO. Anyway, I got a pump that fits a modern VW (part #1J5 955 651). The vanagon pump has larger more common pins for the electrical side, so it might be a better, easier bit for electrical. I had the modern pump on-hand, so there ya go. The rest of the system remains the same. The rubber hoses are replaced, the nozzles replaced. This includes the air-pressure hose; replace it with a basic hose and point the open end up behind the glove box for an air source.

That's it for today.  Doing the whole job in one post was just too much.  I hope everyone had a hapy, healthy and restful holiday season. Have a safe and wonderful new year.

Posted by PdxPaulie at 8:30 AM No comments:

Electrical. How (not) fun

I know its been a few weeks. Like so many folks, time disappears around Thanksgiving and it doesn't really re-appear until after New Years Eve. I've been in that time warp, but I have been thinking bus-y thoughts. 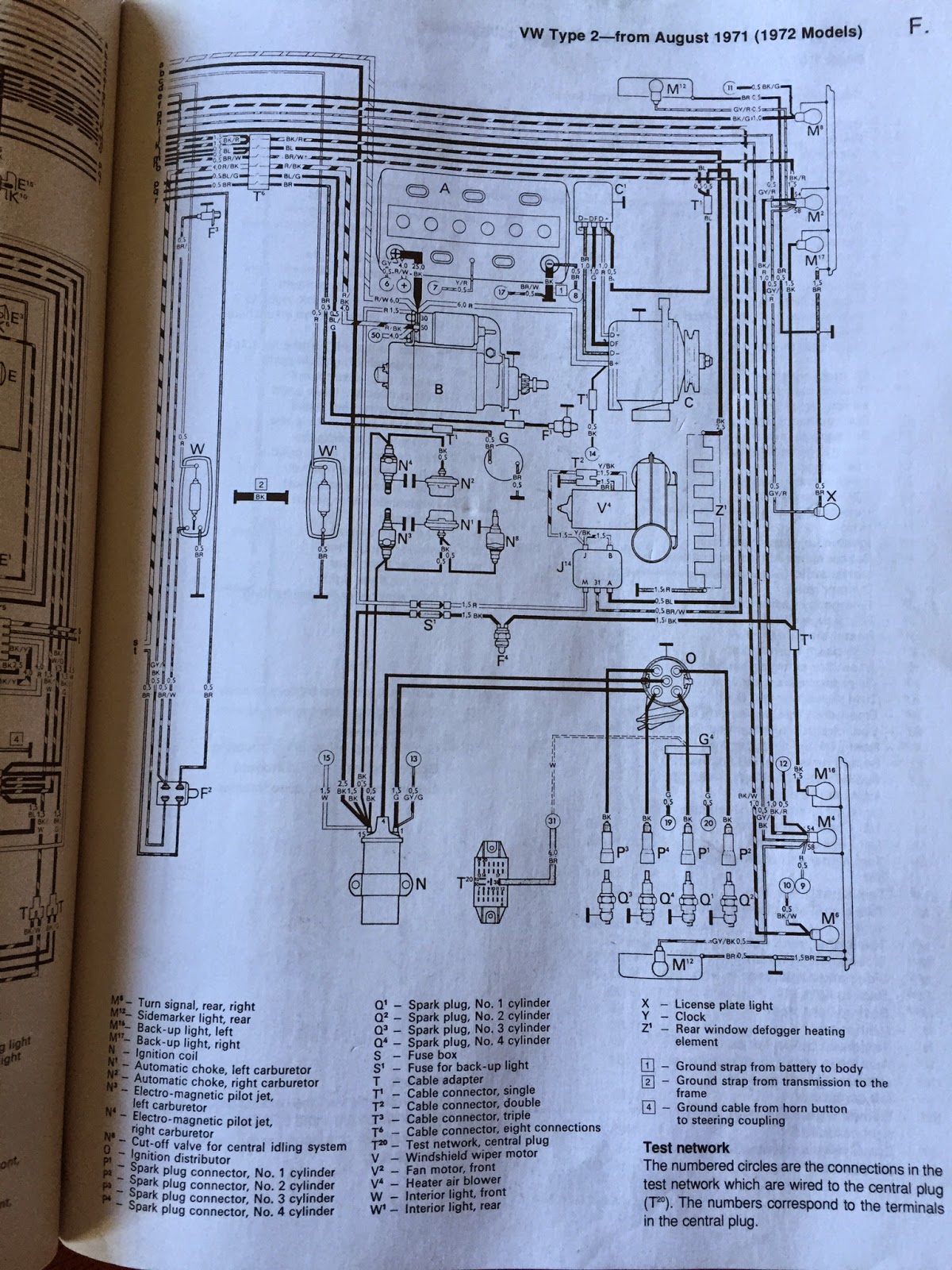 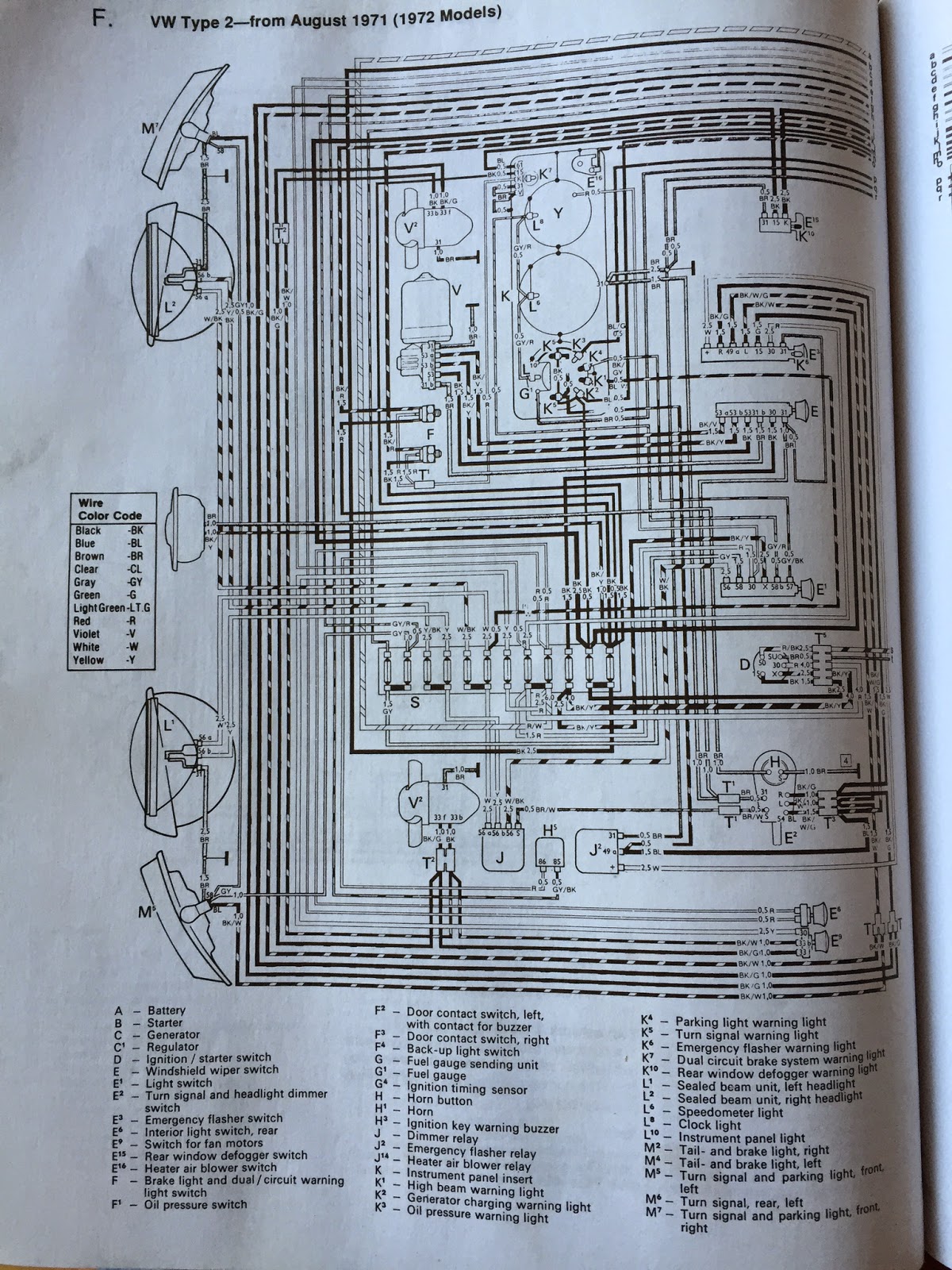 I've spent a few hours in front of televised football, Bentley wiring diagram in hand, trying to figure out the electrical system. I have this very odd electrical behavior I'm trying to chase down.  It all started again when I put the replacement battery in. I shook something loose, and now, when the running light is on, I can't shut off the engine with the key. Turn the key back to run, shut off the lights and then turn the key? Shuts off. The last time this happened, I removed the ground wire for the rear light from the tab and re-attached it. Problem went away. This time? No such luck. The brake warning system light is also illuminated when the running lights are on, so I figured it had something to do with the rear bulb again. I've removed and replaced the bulb, but no luck. The symptom persists. This brings me to my football, Bentley and head-scratching. 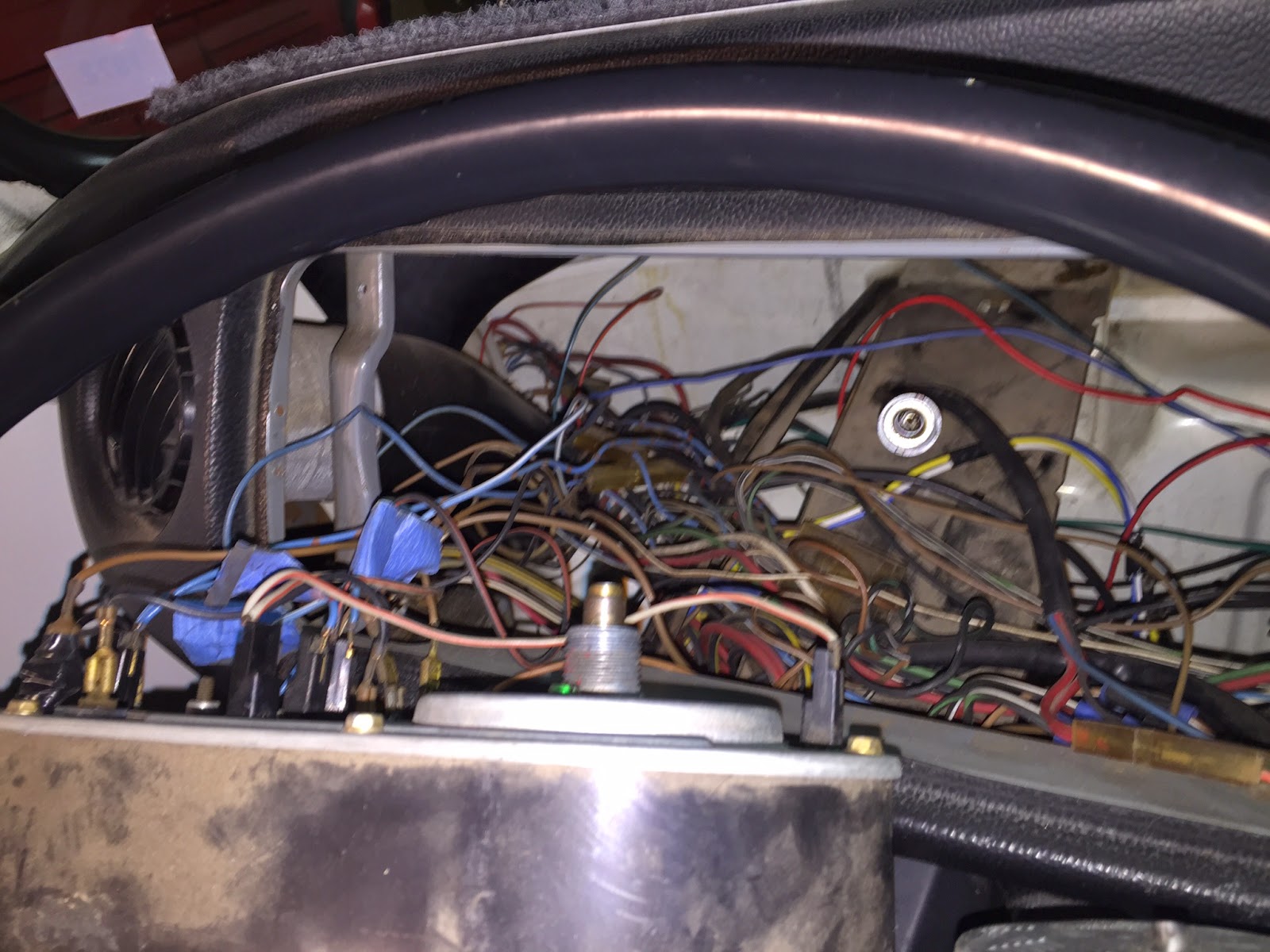 In looking at the Bentley, the wiring diagram for the brake warning light is pretty simple, but it connects to a few things I wouldn't have expected, like the generator warning system. I concluded that the brake warning light would be on all the time if it wasn't semi-controlled by the generator, so after some thought, that makes sense. Still, I don't have that generator hooked up, so maybe one end of that wire got itself grounded or something. Knowing the holiday break was coming, I concluded that it was finally time, after 10 years of ownership, to pull the face off the dashboard and clean up the wiring. It's actually very easy, like so many things, to take the dashboard apart. 4 Phillips-head screws (2 on each end) hold it on. Before you start removing them, though, detach the speedometer cable. On the old bus, its a right-hand thread-in type. Vanagons have a different set up.

My bus doesn't have the little plastic tips on the "climate" control levers anymore, so I didn't have to remove those. If you have these little tips, be careful; they break easily. Once the screws are out, the face lifts off. Tilt it towards you, so the top slips under the steering wheel. You can do quite a bit of wiring without having to remove the steering wheel, but first, marvel at the dusty, dirty electrical mess behind that dash. Wow. 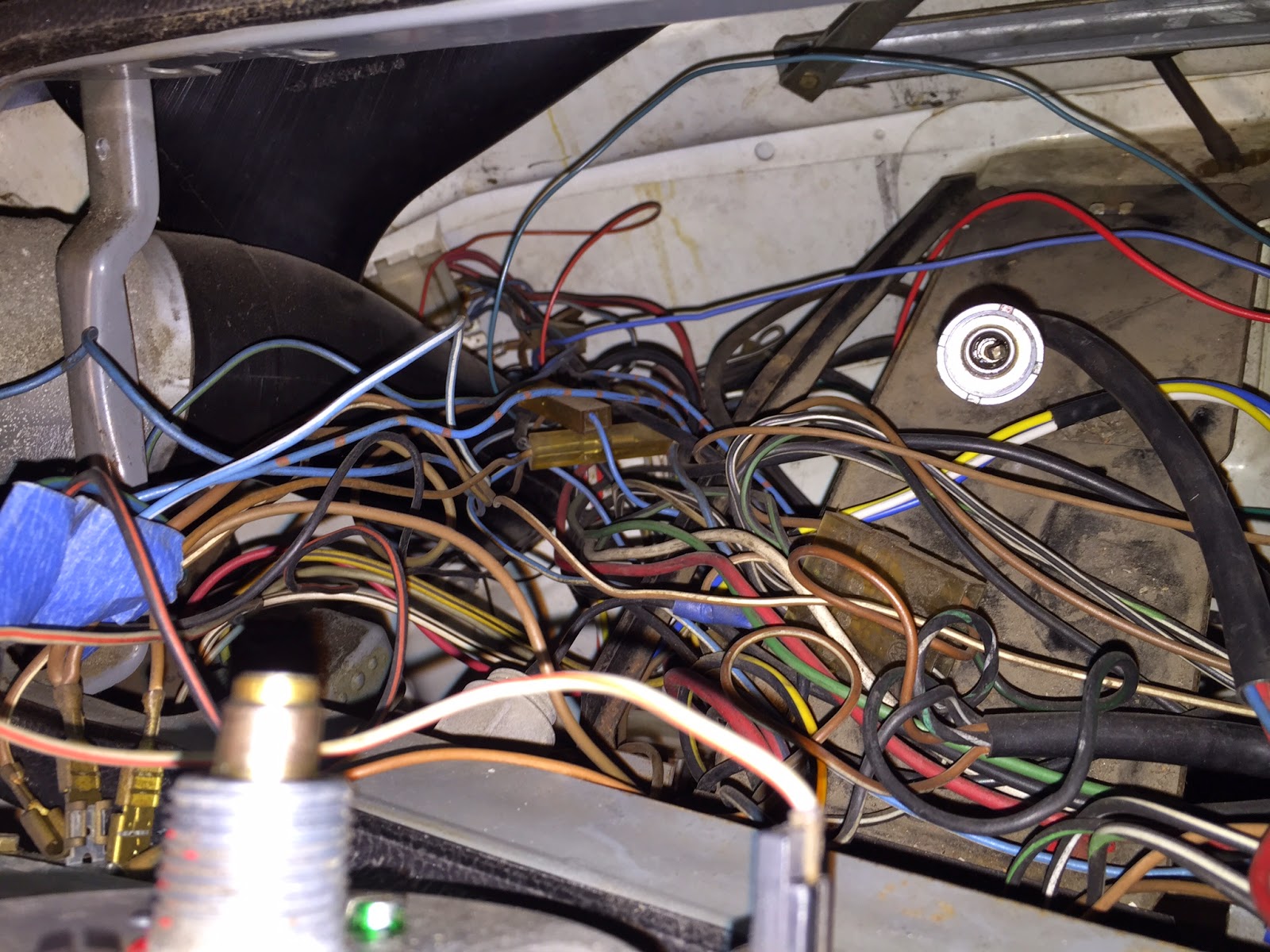 Enter Winter Break
My employer likes to shut the offices down for the last 2 weeks of the calendar year. They have concluded that many folks take that time off anyway, so why heat a building that only has a handful of people in it? Makes sense. So, I'm lining up work for the break. I'm starting with the wiring. I've spent a few hours figuring out which wires I don't need anymore because of my different engine. I still haven't figured out the weird short in the tail light, and now I have new electrical demons to chase (see picture). The wiring behind the dash is long overdue for some love, and the fuse-box hasn't been attached to the bus frame since I bought it. Yikes. Add in the tail light, and I've got a bit of work ahead.

Plus, I've been wanting a windshield washer, and I haven't had one since I bought the bus. RAtwell lightly describes a way of installing a more modern washer (from the air-pressure model of the bus), but he has a '79. The washer valve is completely different in a '79, so this becomes a greater engineering challenge. Bring it!

Last, I found some headliner material for cheap. The ceiling of the bus is Baltic Birch that was painted white, and looks awful. I thought the foam/felt could absorb a little ambient noise and make the interior a little nicer looking. We'll see if I have the time.

That's it for today. I have already started some of the engineering work around the washer. I'll post on that progress, as well as all the other things I started sine my last post as we enter the new year. Have a great holiday season, and as always, thanks for following along-

Posted by PdxPaulie at 5:30 PM No comments: