It's been a quiet month , postings-wise, but busy out in the world.  Work for both me and Boo has been quite heavy.  So, I've found myself doing much more of the usual domestic stuff while her seemingly endless days of long hours continue.  Additionally, I recently endured another round of legal fun with my ex-, so I have had lots of time force-focused on what I'd call small-ball.  Get through the day stuff.  It helped me recognize that by spending so much time in the deep detail, you really can't get out above it to see the larger picture without some effort.  Today's musings are along those lines.

Small Ball
What is thinking small?  I think that's perhaps the most important question followed by "how do you recognize when you're blocked in by it?"  Thinking small comes in all shapes.  I've had it happen when I'm working on a very fine point on the bus, like fixing the coolant leak.  While that thing plagued me, I couldn't get out of it enough to see the bigger project and plan things out.  As a result, after I fixed the leak I languished for a few weeks trying to figure out what was next.  The past 3 weeks, I've been focused on personal budgets, domestics, day-to-day work and the upcoming legal event.  Each of these presented the opportunity to think both big and small, but the pressure and fatigue had me down in the weeds.  My focus was picking up dishes or running a load of laundry.  Really small stuff.

Spotting It
How do you know you're thinking small?  Consider the time horizon of whatever you're focusing on.  Does it vary?  Or, have you rutted into a fixed and shorter time period?  Consider the scope of the issues you're thinking about.  Are the different things varied in size?  Or, are they all somewhat the same size?  The less the time horizon and scope vary, the more you'll find yourself in a shrinking space.  Without recognizing it and making an adjustment, you'll only be thinking small.  Bigger plans won't come to you inspired.  Instead, you'll be deep focusing on tiny details.  While going deep into details sometimes necessary, being there all the time traps you from greater ideas.

Changing It
Sometimes, the event you're high-centering on has a fixed point-in-time, like my legal hearing.  Once it passes, the Small Ball passes with it.  Other times, the thing you're focused on has to complete before your mind can let it go.  That was the case with my coolant leak problem.  But, can you force yourself out of the deep?  Yes, you can; there are lots of ways.  My favorite is going to a travel website and pretend to plan a trip a few weeks or months out or trolling JamBase for a concert a few weeks out.  By looking that far ahead, you trigger yourself to force your mind into a different time horizon.  Spend at least 15 minutes in this different time horizon.

It was this kind of thinking that got the TDI-into-a-bus project started in the first place.  I had spent so much time deep into the effort of getting my center-mount Weber carb to operate well at or below dew-point that I couldn't see the rest of the bus project.  I poked around for different power ideas, read some bulletin boards, and started to get my mind out of the deep detail.  Then, I totally switched it up and did a bunch of research on cob housing, and that flipped the switch.  I needed to poke around for different power answers first: force the mind to change the scope horizon.  Then, break free of the small with a completely different exploration at a high level, like cheap DIY housing with available-on-premises materials.

Bigger
While I needed a day to emotionally recover from the hearing, I spent part of the next day researching heating solutions on the bus.  Just like that, I'm able to think big again.  Now, I'm asking myself what could camping season look like next summer?  If I can get a diesel heater integrated into the bus, could camping season start in April?  or even earlier?  What would the interior look like if I put a soft headliner in?  What if all of the seats were covered with the same fabric?  What about the exterior paint?  For some, this is still thinking small, and I totally get that.  For having started so deep, projecting work out beyond the next couple of days... thinking about things that could take a few weeks is a big step.

That's about it for today.  I'll keep stretching to consider bigger targets.  Maybe I'll resurrect that idea about a mountain cabin.  That was often a very effective tool to pull me back out of the weeds and consider life and my place in the world differently.  Thanks for following along, and now that I'm out of the depths, I might have something to post about again before the month is up.
Posted by PdxPaulie at 5:30 AM No comments:

Somehow, I've managed to work my way to 300 posts over the last 7 years.  Rather than a real-content post today, I'm going to reflect back kind of like when TV shows do a "best of" episode.  Frankly, I hate it when TV shows do that, and promptly switch the channel when they do, so my following that model is actually kinda funny. 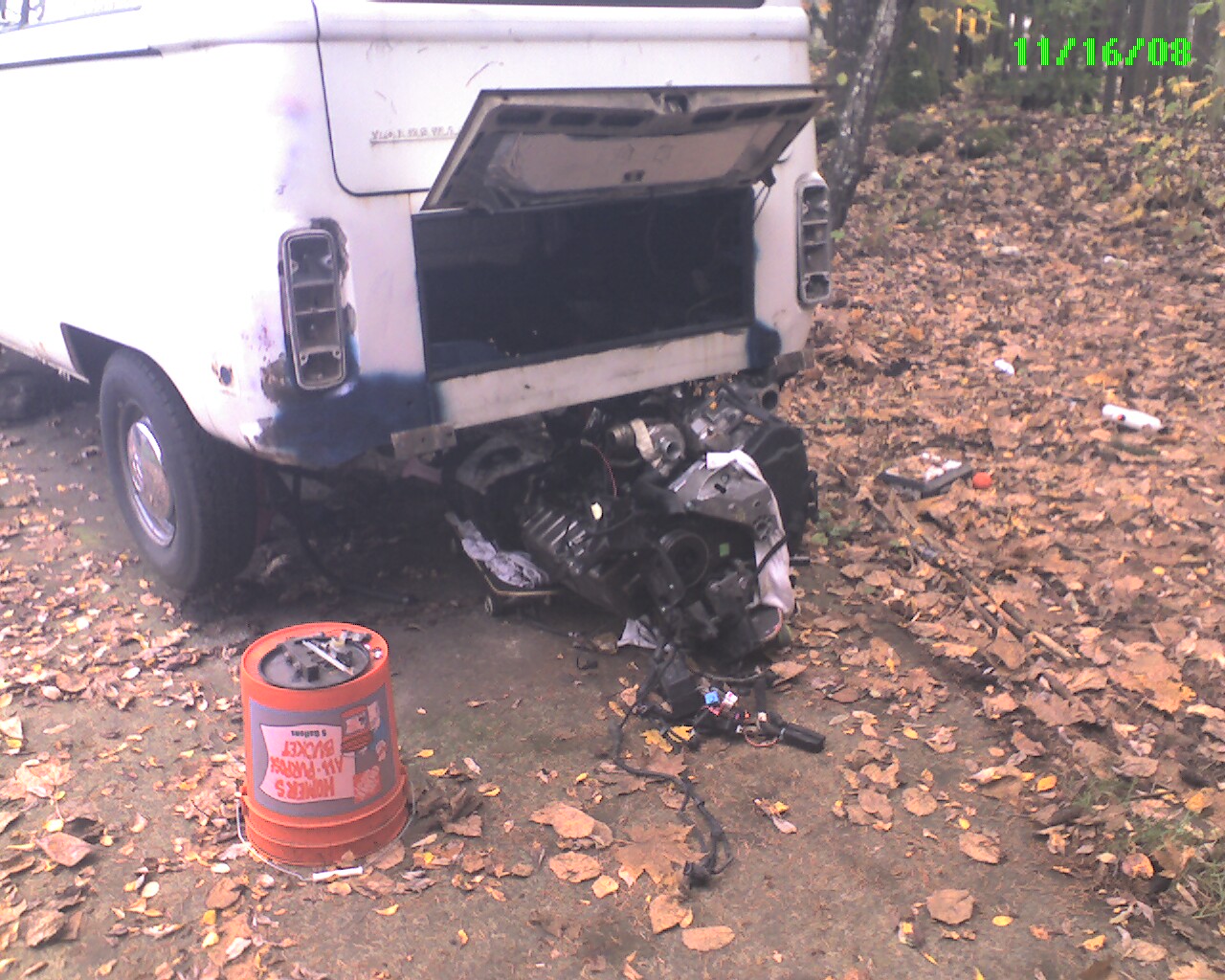 Ranging from January of 2007 to September of 2009, my first 100 posts ran the gamut of topics.  That's probably true of any cross-section.  In looking at what was happening with the bus, the blog starts with him running the original type4 engine, but I soon started the TDI work.  Early posts ranting on some old air-cooled vehicle abuses like removing the cooling system shifted to engine options and then to solving the install of a water-cooled plant into an air-cooled body.  Deciding on the engine was recorded on April 13th, 2007 (see Engine Decided) and a year later, the engine was still sitting on my garage floor, a failed first attempt on both the fuel tank relining and the engine mount had slowed me.  That winter was spent getting the engine and transaxle to mate for the first time (see first and second attempts).  I broke an adapter plate, and my spirit over that winter.  It took going on the road to see the Dead and starting the separation from my ex-wife to get the project going again in early 2009.  The first 100 posts ended with the new rear engine mount being fabricated, the starter adapter solved (see starter adapter corrected...), the vacuum completed (see what's that soft sucking sound) and the fuel fill set up. 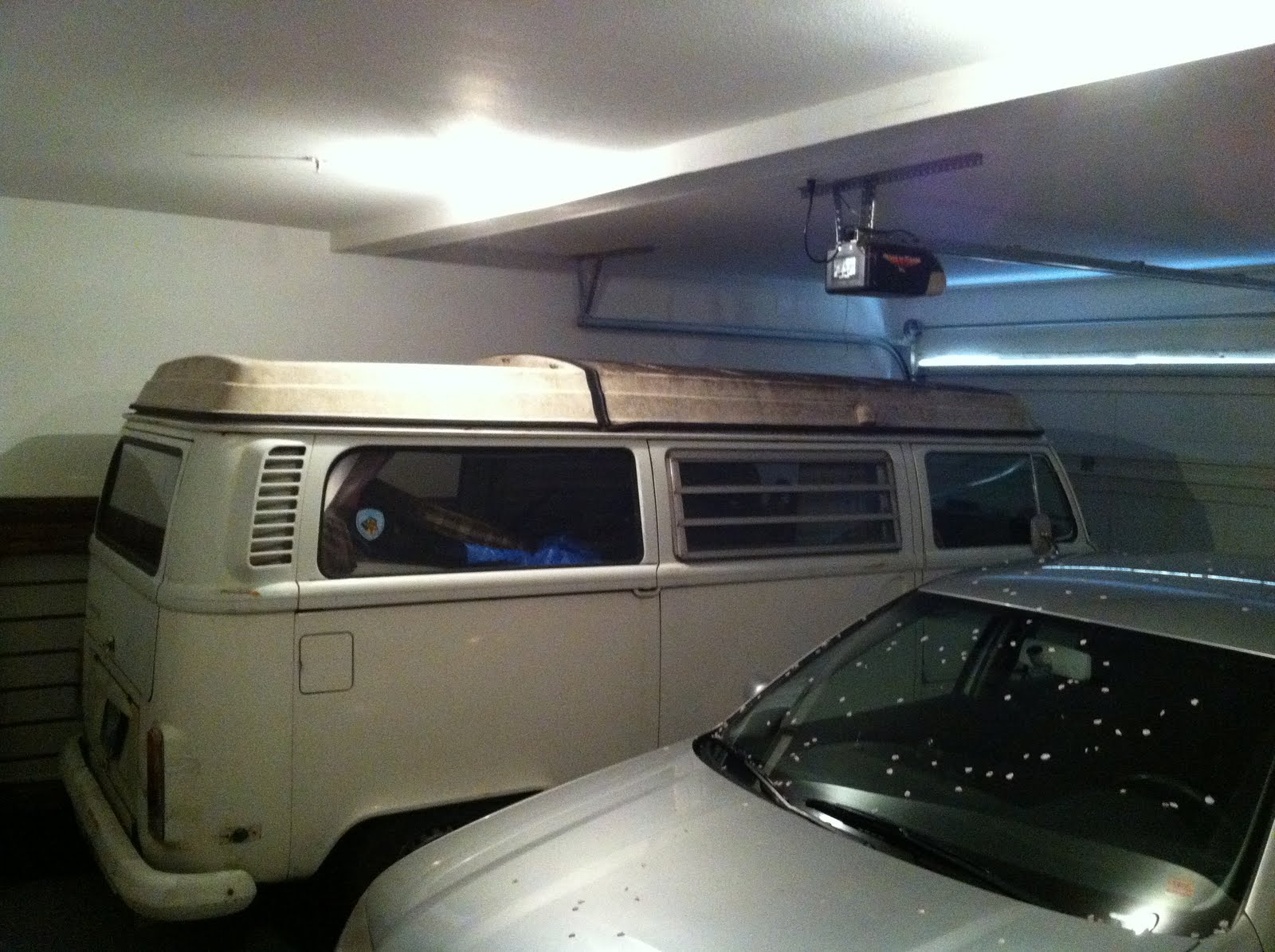 Starting in September of 2009, this block of 100 posts carried through late July of 2011.  I started this period sleeping in a spare room at my now ex-wife's house and ended this period completing a divorce and living in a townhouse apartment.  Still, the middle section of 100 posts started with the same urgency which the first 100 had at the end, in terms of bus work.  The fall of 2009 included the fuel tank (see Fuel Tank Solved) shape / vacuum pump issue, buttoning up the turbo, vacuum, starter, CV joints and moving the bus off the mud and onto concrete for winter work.  Over the Winter, the radiator/cooling was addressed (see Radiator test-fitted, shrouded and Installed) and the bus project really started to roll.  The hatch was finished, intake routed, electrical, clearing codes, finishing the coolant routing, primary electrical, etc.  By December of 2010, my ex- and I had decided to call it quits.  I spent January through March staying on my parent's couch trying to get the bus into a will-travel-under-own-power state before the divorce finalized.  I was able to get him running-ish, and had a muffler installed by Meineke (see Exhausted) during that working-remotely period.  By April, I had a townhouse-style apartment with a dedicated garage space and focused a considerable amount of free time into the bus' interior.  I swapped out the fridge for storage, applied more sound killer, installed an accessory battery and fuseblock (see fused) and ended the late July with installing a Riviera pop-top in place of the original ripped-up Westy top. 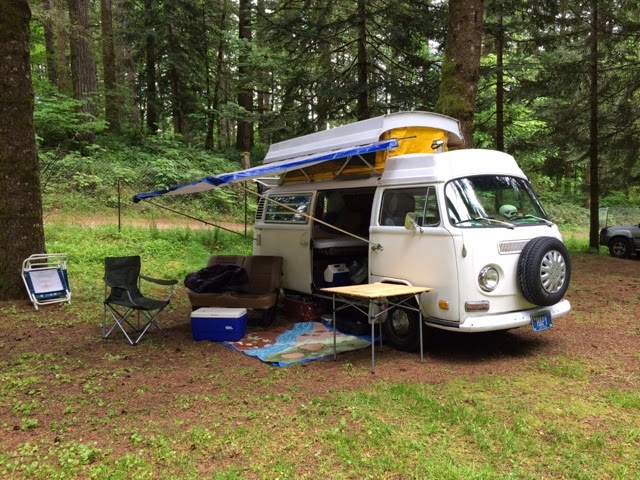 Picking up in late July of 2011, the final 300 posts carry us to today (early November 2014).  I started this period as a divorced father of 2 boys and an old bus, and I now conclude this period remarried father of 4 boys and an old bus.  We moved out of the townhouse apartment when they raised my rent past the point I could afford, and into Boo's condo.  From the condo, we moved into the house we've been in for 18 months now.  Frequency of posts dropped during that housing change and life settled into a very different pattern of family play versus self mechanic'ing.  This period, though, marks the time when the bus went from stationary project to daily driver.  In August, we camped in him for the first time in years (see One Small Step for Van).  Later that Fall, we hit the road to Eugene for Furthur but needed a tow home.  Like I've said before, the journey is the destination, and we had to pull the tank to get re-lined. 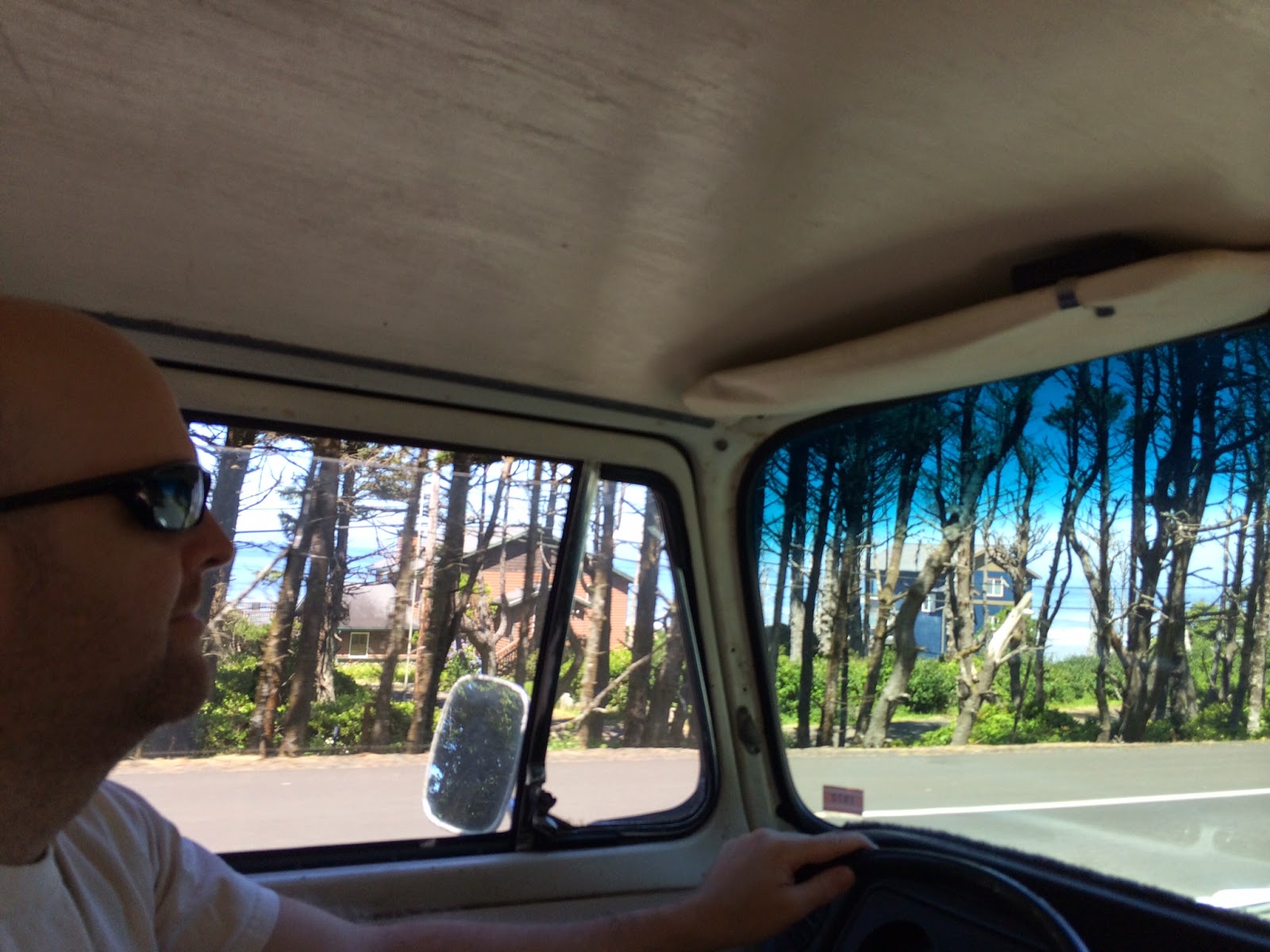 I returned the original engine harness to service, and struggled with coolant leaks while trying to keep him on the road.  I discovered a new love of snowboarding, and bonded with a new family at Mt. Hood.  The bus underwent more transformations as well.  He has a middle row bench seat (see Vanagon Seat Install, no longer has a grossly underused kitchenette (see Enter Summer, exist posting) and has a rebuilt jalousie window (see parts one and two).  I dropped his engine 3 times in this stretch of posts, twice having to separate the engine and transaxle.  Both of his bumpers have been hammered straight-ish and painted to an almost good-looking state (see front 1,2,3,4 and rear) and he now sports door cards as well as cards for most of the interior.  The ceiling doesn't sag anymore.  This past Summer, we had 3 flawless road trips to Nye Beack on the Oregon coast, Horning's Hideout and to the Black Sheep Family Reunion.

So, What's Next?
I guess that's always the question when you don't draw a map ahead of time.  I honestly don't know.  Frankly, I couldn't have drawn a map to this point and I wouldn't have ended up here if I'd tried to.  I look forward to many sights like the one below, simply driving the posted speed and enjoying the sights out the front windscreen.  As before and always, thanks for following along. 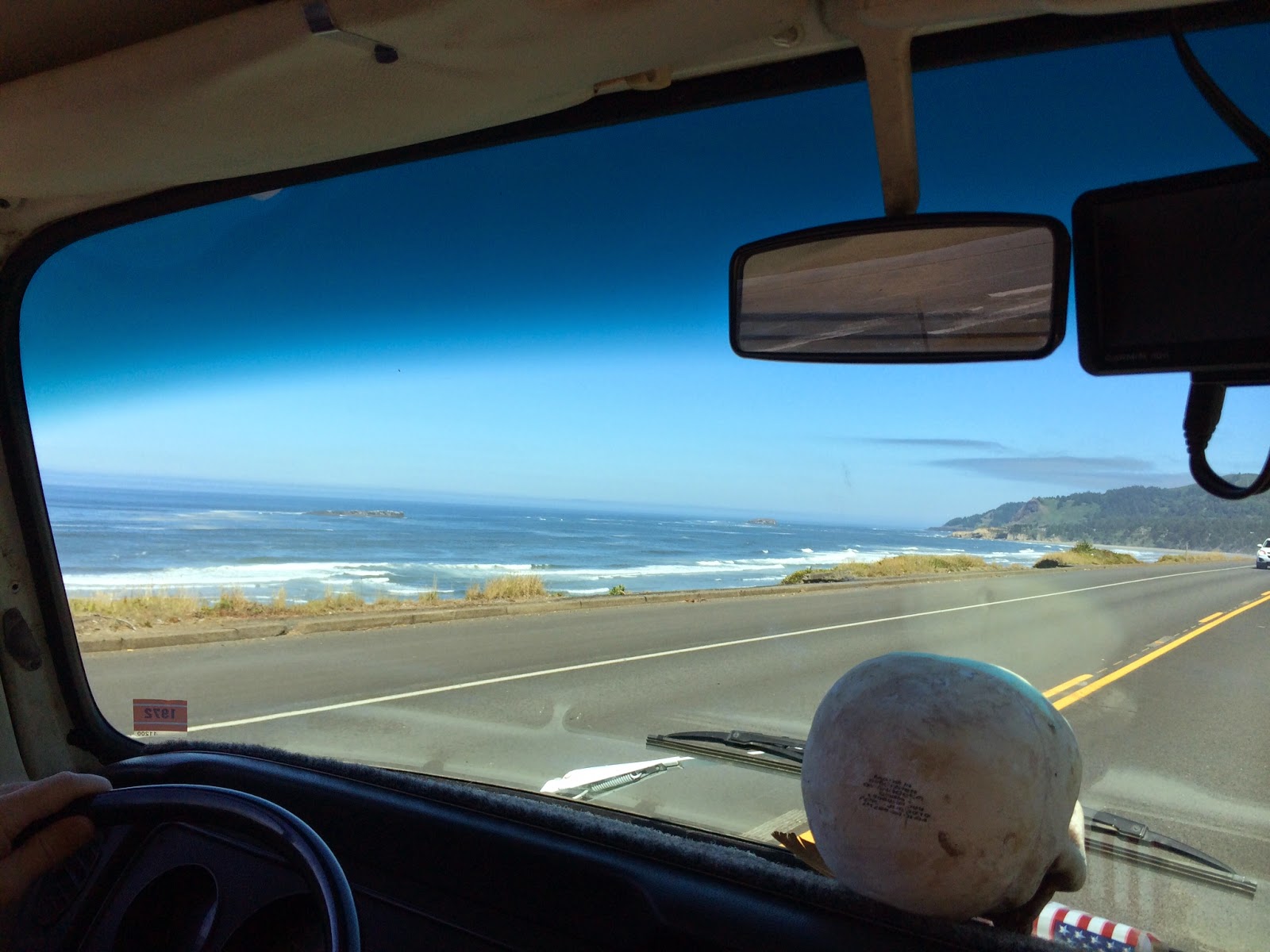 Posted by PdxPaulie at 12:30 AM No comments: