Work has been extreme these last few weeks (logging near 60 hrs a couple of times), and things around the homestead have been taking a toll. Now that the project is wrapping up, and the weather has turned nicer, I hope to be able to use the longer daylight hours to get something done. First, I rolled Hapy back into the middle of the driveway. Apparently, my sone and his friend rolled it back into the dirt so they could ride their bikes or skateboards or play basketball or something. Anyway, just byb rolling him back so all 4 tires are on cement seemed to make him sit happier. That's all it took.

I started opening windows and doors, and re-thinking what I was doing. I did a little research, and talked to a few people, and settled on brazing an aluminum frame for the radiator. The folks over at 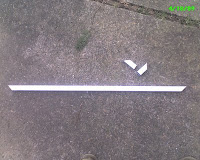 Pacific Metals in Tualatin were able to set me up with 1" rounded-square 6063 extruded Aluminum tubing at around a $1 a foot. With the angle grinder I got last Fall and a tape measure, I spent Saturday afternoon (between release activities for work) cutting up tubing.

I have a small section I needed at the rear (front-is-front) of the hatch I cut above the engine. I may need more supports around the hole, but the rear edge has no support, so I preped something for that (picture to the left). Then, I cut up the support "U" for the raditator support. 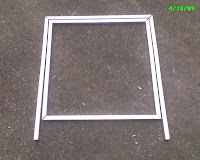 The opening "U" will face rearward. Last, I measured, test fit and cut the square-ish frame that the radiator will be bolted to. This will have a hinge at the front so I can determine the best pitch in real testing. I'll support the rear end with cables until I have a firm setting. The picture on the right shows the "U" and the frame as they will be after brazing. All of that tubing consumed about 20' of the tubing I bought.

I'll be breaking out the torch and brazing rods tomorrow night, and I hope to have some pictures of some brazed framework shortly thereafter. By the weekend, I should be ready to cut more for the hatch door supports and a jig to go between the ATV jack and the bottom of the engine. I'll post an explanation of that later.

Sorry I haven't posted in a while. Its been really crazy both at work and at home.
Posted by PdxPaulie at 4:54 PM 1 comment: