nightmaring of a white Christmas

After almost a month of doing nothing on the bus, I have been granted this week off by my employer. The added bonus of not getting paid time off kinda sucks, but I do welcome the opportunity to get some nagging things done. Of course, I haven't updated the blog about the last few weeks, so I'll play catch-up today.

Snow, then ice, then more snow, and, finally, more snow. 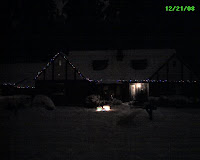 If you live anywhere in the northern 2/3 of the US, I'm sure you have a somewhat similar weather story to tell. Since I live in the Pacific NorthWest, we got it a few days before you. There are a couple of camera-phone pictures taken at night included to give you an idea of how deep the snow was. The second one is the Benz to the right and Hapy to the left each with over 6 inches piled up. I should have measured. The fun started over 2 weeks ago with a Sunday night snowstorm that usually brings the Portland Metro area to its knees: 2 inches of snow. Most folks around here don't have studded snow tires (or any snow tires for that matter), nor chains, nor skills to drive their cars in the snow. This makes it especially dangerous for pretty much everyone. Fortunately, most of the locals realize they don't have the equipment or skills, so they don't drive. We have at least our fair share of weekend warrior types with their Ford Excursion 4x4's that see snow as an opportunity to declare their vehicular superiority. Many of these motorists fail to recognize that we all have 4 wheel stop, but that function only works when you aren't driving like an idiot. These are the folks on the road (and spinning off of it), along with the few that have the right equipment, temperment and skills. I was lucky enough to have a neighbor that works at the same place I do that has these 3 advantages, so I drove in with her. Thanks Rach.

Following the Sunday night storm, there was a Tuesday night 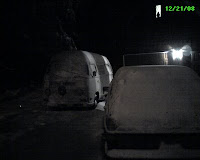 storm that brought a little more snow. This closed the schools for the next 2 days (now up to 4), and kept me home Wednesday. By this time, we'd surrendered to the storms and ordered chains over the 'net from JC Whitney. We even paid extra for overnight delivery. Thursday I was able to drive to work, but a new storm hit very early Friday morning that again closed school. This new storm was freezing rain. By midday we had an inch of ice on everything, and the snow was starting again. Fun. We got more snow over the weekend, but no chains. By Tuesday morning (12/23), we had over 8 inches of fresh snow, and work had officially closed the office until after the holiday. The chains arrived, so I was able to take my younger son to the Blazer game that night. Wednesday morning brought more snow, but we had a soft-thaw start midday that turned the compressed snow very slippery. After driving over to NE Portland for Christmas Eve, we got stuck on our hill 20 meters from our house. Christmas Day, I shoveled neighbors out, and the day after Christmas, my neighbors and I shoveled the street down to the main road so we could come and go. As I write this, all the snow is gone except for the black snow on the road edge. The memory, though, is still quite vivid.

On deck
I'll be clearing the garage these next few days to prepare for some delayed maintenance on the cars. I have some filters to replace on the Jetta, and a fuel line to repair as well. The Benz has a sagging backend that requires new "accumulators", and the rear driver-side door's "check" is broken. Once I've done all that, the bus work resumes. I have located a rear heater from a vanagon that should work. I'll be picking that up tomorrow. If the price is right, I may buy 4 rims too. If nothing else, this snow has reminded me the importance of being prepared. Those rims will have studded snows mounted on them before the first Winter Hapy can drive. Then, if an ice storm hits, or we get 8 inches of freak snow, I can be ready to roll in 15 minutes.

Regardless, the water/coolant system is next. I'll post something in a few days.
Posted by PdxPaulie at 5:30 PM No comments:

Simply put, the ALH TDI engine from a 1998 VW New Beetle is in. Once the hole was cut, it was a matter of jacking it up into the air, and hooking it up. I'll give greater detail below, but this was 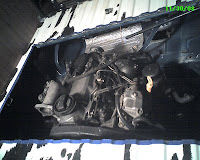 a huge "diamond" on the project plan. Now that the engine and bus are a single unit, I can roll the bus into the garage for the Winter. I need to re-assess what I'm going to do next, but the huge blocking task has been completed.
So, how'd I do it?

Because I haven't built a wooden jack adapter yet, it wasn't as easy as the next and all future ones will be. I tilted the engine as much as I safely could with stacked 2x4's on the ATV jack arms, but I couldn't get it all the way to 15*. So, I put a 2-ton rolling jack under the front (front is front) of the transaxle and the ATV jack is working the engine. I slowly jacked up the unit to just under the rear transaxle mounts. At this point, the lack of a hole was previously getting in the way. Now that there's a huge opening, I was able to get the engine that little bit higher. To be fair, the barrier wasa a support beam running under the ceiling, not the ceiling itself. I probably could have made the engine fit just by removingthe beam (in retrospect). Regardless, it would have made the rest of these efforts much more difficult had the ceiling remained.

Between shoving and manipulating the angle of the engine/transaxle unit with the jacks, I was able to slide the left (driver's) side bolt through. Much more angle playing, and I was finally able to thread the bolt through the mount-nut on the rear side of the mount. 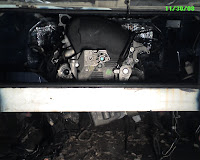 Next, I switched around the ATV jack a little bit by lifting the engine (with my hands/arms) and moving the jack with my foot. This would have been a great time for a neighbor to stop by to ask what I was up to. No such luck. So, with a little good fortune, I was able to get the engine cranking back up again. With the right side rising, the left was relatively still, but I was losing control of the pitch. The front of the transaxle was getting far too high, so I couldn't slide the bolt through. New tack: lower the engine a little 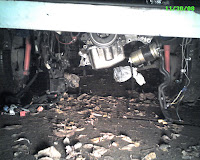 bit until I can attach the transaxle front mount. I connected it loosely - enough to hold the transaxle level, but it still allowed movement. Then, I moved the jack again, this time so that as I cranked it up, it would move with the rotation a little better (jack was parallel with the rear bumper). Upwent the engine right into the mount. I was able to thread the second bolt pretty easily after that.

So, now the engine is in. I lowered the jacks and danced around my driveway. By now, it had gotten dark, but I was able to snap a few pictures with flashlights, cliplights and dwindling daylight. I need a rear engine mount still, but I can do that on my schedule. In the meantime, I can focus on detailing the next steps and determine the order based on interest, desire and dependence instead of what needs to be done because the bus is sitting in the driveway.
Posted by PdxPaulie at 1:46 PM No comments: