While waiting for the box of parts to arrive from Moss, I wanted to look into the brake lights. They worked initially, but then stopped working after the test drive.

Check Your Fuses First
Since both brake lights went out at the same time, it wasn't a bulb, but it could be electrical. I started where I should always start: looking at the electrical diagram to see what the circuit does. If you thought the fuse box for the VW bus was simple with 12 fuses, the MGB fuse box will blow your mind. There are 4 fuses.

I'll pause while that sinks in.

To be fair, there are 2 additional in-line fuses floating around near the box, but the box only has 4. The brake lights run through the same fuse as most of the rest of the car (the top, #1, fuse). This fuse also runs the wipers, lights, turn signals, etc. Some of those systems worked, but all of them were temperamental. I checked connectivity with my multi-meter, and the #1 fuse wasn't reading consistently through the box. One of the fuse-holders was flaky.

New Box
Swapping out a fuse box for a modern car is a huge undertaking. Even for a bus it could be a little tricky. Doing a 4-fuse box, however, was ridiculously easy. Circuit by circuit, I simply moved the old connections to the new box. the box sits on the passenger-side wheel arch and is held on with a couple sheet metal screws. A replacement is $8. Seriously. I paid many times that much for a used fusebox for the bus. While this did fix all the other systems, the brake lights still didn't work.

Brake Switch
After getting the fuse and fuse box to pass electrical signal, the brake lights still wouldn't light up. After checking the electrical diagram, I traced the electrical to the mechanical switch in the pedal box. The switch, like so many of the systems in the MGB, is extremely simple: a depress switch with 2 wires on it. It's basically an open door switch in your modern car: when the door is open, the little spring-loaded shaft extends, and the electrical connection is made / unmade. With the brake switch, it follows a similar principle, but unlike a door switch, the trigger sensitivity can be set. Around the outside of the trigger shaft is a threaded housing that is held in place with a thin nut. By varying the depth of the nut on the shaft, you can control how early or late in the travel of the pedal the brake light comes on. Neat. Seeing how this is a little car driving around in a world of really large SUV's and luxury sedans, having those lights fire as early as possible is the best idea. At this point, of course, I just want the to fire at all. So, I threaded the nut down so that moving the pedal less than an inch will fire the lights.

As you can see from the picture on the right here, I verified my various solutions by depressing the brake pedal with a roller pole. In the picture, you can see that I got the brake lights to work.

That's it for today. There continues to be a lot going on with the project. Multiple efforts are mid-progress, so there could be a delay in  posts while I finish one of them. As always, thanks for following along.

Posted by PdxPaulie at 8:00 AM No comments:

Continuing the journey of discovery within my new project, a 1978 MGB. Today, I cover the brakes.

Symptoms
Like any older car that hasn't seen recent maintenance, the brakes were spongy. The pedal didn't depress firmly, but it returned relatively quickly, so I concluded it wasn't a matter of failing lines, it was a case of poor hydraulics at the wheels, possibly at the master cylinder. I took a look at the pads on the front driver wheel and concluded that routine brake service was due. I couldn't know the condition of the rest of the system without tearing each wheel apart, but I didn't want the little car in pieces in my driveway while I did my discovery and then ordered parts. So, I just ordered all 4 wheels worth of complete replacements. With Hapy, this would have been $500 or more. For the MG, it was under $300 including new drums, wheel cylinders, rear mechanicals, rubber hoses and upgraded rotors / pads for the front. The only thing I didn't get in that package was a new or rebuilt master cylinder. 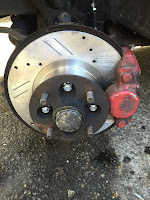 Like everything on the MGB, the wheel is smaller than the VW bus. In one way this presents itself is in how the wheel assembly is put together. The front rotor for the bus sits on the outside of the wheel hub. So, when you want to replace the rotors, its a fairly easy job: remove the wheel, remove the calipers and the rotor is right there looking at you. On the MGB, it goes: wheel/rim, hub, calipers, rotor. What makes this important is that the hub needs to be removed from the rotor (and from the car) for the rotor to be replaced. In the picture on the right, here, you can see the hub to the outside of the new rotor. This install gets messy. Grease can get everywhere. I replaced the rotors, pads and brake lines, and spent a bunch of brake cleaner to keep everything nice and clean. 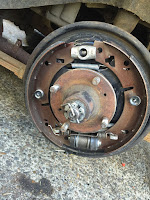 The MGB has drum brakes on the rear, much like the old bus. Also like my old bus, removing the drum off the mechanicals was not like opening a present. That is, unless you like spider eggs and brake dust... and rust. I had expected this, so I'd ordered a complete rear replacement, including the drums. The original drums might have been re-used, but I don't have the equipment to check. Replacement original equipment manufacturer (OEM) sourced drums were not expensive and there's a confidence created when the entire set up has been replaced at the same time. The original shoes hadn't been wearing evenly. It looked like someone drove it around with the handbrake on. It happens; no big deal. Once the drum is free, getting the rest of the old stuff off is pretty quick, but take pictures because putting it back together is like an industrial puzzle. Without a target picture, it gets tricky your first time. The picture to the right here is an "after" picture. Like the bus drums, check the adjustment by spinning the wheel and tightening / loosening until you have just a little drag on the spinning wheel. Of course, this can only be done once the drums and rims are back on.

Rubber lines
The MGB has only one rear rubber brake line. It is accessible through the rear passenger tire well, I like the simplicity of the engineering: hard lines run down either side of the rear axle, joining at the rubber line. These short hard lines should reduce the opportunity for pressure to fall out of balance between the two sides. From the rubber line, a single hard line runs from back to front and up to the master cylinder In the front, there are separate hard lines from the master cylinder to each wheel. The last foot or so is the replaceable rubber line.
Remember to wrap the threaded lines with plumbers tape prior to mating the rubber lines to the hard lines or you'll get leaks. Replacing the rubber brake lines is super important. These lines fail from the inside, so if you don't know how old yours are, definitely replace them. Of course, any time the hydraulic system is opened (other than to fill fluid), you need to bleed.

Bleeding and bleeding
Once the system is physically back together, it needs to be filled with brake fluid. Unlike oil, you don't just pour it in the top and wait for it to work its way down. The fluid needs to be pushed or pulled (bled) to the edges of the system. Which wheel to bleed first, second, etc seems to be quite the debate on the internet. Just my opinion, but I think doing the lines in order of shortest to longest makes the most sense. My thinking: once the shortest run is full of fluid, that line won't factor into the bleeding of the others. I guess, if the system is closed except for the cap on the master cylinder reservoir and bleed bolt on the wheel you're working, it really doesn't matter. So, pick a side in the debate and go at it. Since I was on my own for this effort, I used my MityVac at each wheel rather than the pumping-the-pedal method.

As always, thanks for following along...
Posted by PdxPaulie at 8:00 AM No comments: