Independence Day was observed here in the States a little over a week ago. For Dead-heads, it was the celebration of the Grateful Dead turning 50, so there was a little extra celebrating. Today's post hits that. Beware: limited bus content.

Not Exactly Chicago
Similar to the pair of shows performed in Santa Clara, 70k people who could come up with the scratch to fly, hotel and see the "Core Four" (Phil, Bobby, Billy and Mickey) in Chicago jammed the city for the 3 day weekend. Like the weekend before, I connected with my friends Mayhem and GratefulEd for a camp-in viewing of the simulcast. Rather than haul out to Wheeler, this time we were in the swanky confines of Lake Oswego: a much shorter drive. GratefulEd, however, had set up The Wall of Sound - the home edition on his back deck. We had a projector beaming the visuals and a much larger crowd than had been in Wheeler tuning in. There were no arrests, no staff pro's or GDP uncover agents. Instead, we had meat snax, liquor and no-wait restrooms. Kidding aside, GratefulEd and his family were wonderful hosts.

Similar to the Wheeler shows, I arrived early, set up Hapy for the lot scene / camping and cracked a beer. After all the festivals and events, I've gotten it down to less than 30 minutes from pull-in to fully set up, complete with awning, middle row pulled out as a lot-couch, bed set up with curtains, etc. Mayhem joined me for some classic lot-style pre-func'ing and then we headed around back for the main event. Boo arrived late, missing part of the first set.

... but Not Exactly the Grateful Dead either
Once we got everything set up, it was up to the Core-Four-plus to provide the evening entertainment. Like the Wheeler review (see: Santa Clara by way of Wheeler), I won't bore you with set lists or a review. The fine folks at JamBase have a more than sufficient rose-colored-glasses review to read. All three shows were better than Santa Clara, but that's really not saying much. None of the three shows were on-balance better than the Furthur shows I'd seen. The last show was probably their best, giving reason to believe that if they kept at it, they could probably sound pretty good. Trey just wasn't as connected as he should have been, and the band wasn't as cohesive.

I trolled around JamBase between the Santa Clara shows and Chicago. I noticed that only Phil from the Core Four had tour dates. Billy and Mickey haven't been playing much in a while so, to me, this just further supports my belief that Bobby has a health issue that he hasn't disclosed, and that's why Futhur stopped touring. JohnK and Jeff are touring under the Golden Gate Wingmen, additionally supporting that Bobby isn't playing anymore (Jeff was his long-time keyboardist). That's really too bad. Love you Bob.

Chong
No Grateful Dead related music venture is complete without some side adventure. With a venue like Lake Oswego, I didn't expect much in this arena. I actually brought a book so I wouldn't get too bored. Luck smiled on me, though. For those not in Oregon nor a part of any marijuana legalization effort, you may not know that pot became legal for individual use on July 1st. Since we were celebrating "the 4th", weed had been officially legal for 3 days. 3 days, man. 3 days. As I turned Hapy off the freeway on my way into town, I saw a sign announcing a visit from Tommy Chong at the functional glassware shop just outside Lake Oswego. And just like that, we found our adventure: let's meet Tommy Chong.

Mr. Chong has been on tour himself, in a way, doing personal appearances at head shops in support of some personal-use products with his name on them. Neat. On the 5th, he was scheduled to appear at Mary Jane's House of Glass, and he did. The scene was, in a word: weird. The parking lot was roped off for pedestrian traffic, so many people were parking at the Taco Bell next door. In the center of the lot was a circus tent where beverages could be purchased and consumed, and a band was tuning up to play. Between the tent and the front door of Mary Jane's, there was a queue forming for pictures with Tommy Chong. Curious, we passed the queue and entered Mary Jane's. If you've never been in a functional glassware shop, it's hard to explain. Picture a 50' by 50' square commerce-space with glass cases pointing in various directions, all filled with glass pipes. No objects d'art, no brass, no wood, nothing else. Just pipes. Oh, and some incense in the corner. In the corner along the front wall, but opposite from the front door was a table behind which sat Tommy Chong. "$40 a picture," a young woman exclaimed as we entered. Yeah, I'm not paying $40 for a picture with Tommy Chong. No offense, Mr. Chong. We just stopped by to say "hi", so we did. 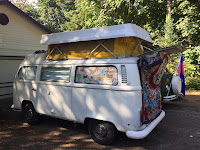 Mayhem took it one step further. Concluding that Mr. Chong probably didn't have a place to watch the final show featuring the "core four", Mayhem tried to engage is a simple conversation with Mr. Chong. Apparently, that was outside of what the Mary Jane's folks knew how to handle: so, you don't want a picture with him, so you must need to be in the autograph line. No, we don't want an autograph. "Would you take a picture with him if it was free?" Sure, so long as we get to ask him a question. Well, that proved quite difficult, but Mayhem got Mr. Chong invited to our streaming picnic thing.. and found himself in a rather awkward picture with Mr. Chong. Neither of them looked like they wanted to be in a picture. Afterwards, I noticed the look on Tommy Chong's face was the same in every picture. He was a perfect look of "really? this is where I ended up? how did this happen, man? can you help me outta here?". Sorry, Mr. Chong. We tried to spring you for a few hours.

Bid You Goodnight
The final show was just that. For those who were there, I'm sure it felt like closure. For those of us watching from home, we got an extra special post-show interview with Bobby. In answer to the question of will we never hear you guys again, he responded without hesitation that we'll see it again, or something very similar some time real soon. Thanks for stringing us along, Bob. We hope you're serious and we'll see you and Phil on stage together again. We'll have the bus ready to go whenever you declare the next Furthur show... please make it on the west coast :)

Bus Content: I adjusted the windshield washers with a push-pin in the tiny washer nozzle. Now, it streams into the upper half of the windshield dead-center of the wiper path. Perfect.

That's all for today. Thanks, as always, for following along.
Posted by PdxPaulie at 8:30 AM No comments:

One more post before I get to the band review for the Hoot. I guess I just don't want to do that. Anyway, today is a take on those who weekend-warrior themselves into trouble. We call them "Waldo".

One thing that seems to appear at every festival or jam-band parking lot is that one guy/girl that didn't know their psychic limitations and over indulged on something. Maybe it's a person standing way off by themselves screaming into the air, or a person passed out under a car, half-eaten hot-dog still in their hand or simply someone so messed up they are simply mumbling and drooling. Boo and I call this person "Waldo" in memory of the one such case that landed in our camp at the Black Sheep Family Reunion last Summer (See: Black Sheep Family Reunion).

Hoot
The 2015 Hoot had a Waldo too. Waldo and his girlfriend set up their tent near us that first day, and set immediately to drinking. I'm totally down with that. For a 3-day music festival, though, pacing is important and food is a necessity. They had neither, and quickly found themselves on the ugly side of the generally groovy support staff. Admonished multiple times, they were threatened to be kicked out of the festival for repeatedly peeing on the road rather than walking the shorter distance to the flush-toilet restrooms. Awesome. At one point, we spotted Waldo barely sitting upright on the hill so we gave him some water. He wasn't able to form words, but there was clearly gratitude on his face. We think they were ultimately kicked out because when we arose on Monday morning, they were already gone, though they had been raging the night before when we went to bed. Neat.

Like I said above, there's usually one at every festival. The Hoot is rare in that the indulgence is usually very low, and the crowd is calm. Don't get me wrong.. its a party, just the party-goers know their limitations. Except for the inevitable Waldo.

I think the Four Peaks Music Festival was the exception that proved the rule: we couldn't find Waldo. There were lots of partiers. On that first night, we couldn't go more than 10 minutes without hearing someone shouting "One!... Two!... Three!... Four Peaks!" from the distance. Hilarious. There were plenty of Walking Dead in the camping zones in the morning, slowly shuffling from their respective bedrolls to the porta-potties or the food vendors. At no point, though, did we see anyone completely blotto, incoherent or out of control. Like all the other festivals we go to, there was a White Bird tent, so maybe the White Bird volunteers were able to find Waldo before we did. Maybe we just simply didn't venture out from Hapy enough to do a real search. I'll just go on believing that it was a festival of fest-hardy folk who knew their limitations, had a f-ing blast, but never got too over the top.

That's it for today. I'll keep searching for Waldo. Boo and I scored an unexpected invite to the NW String Summit, so it looks like there's at least one more festival for us this summer.. so, we'll have at least that one more opportunity to play "Where's Waldo".
Posted by PdxPaulie at 2:00 PM No comments: