Short one today. Just the set list and a bus update. 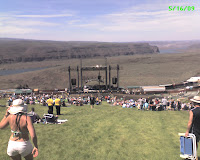 Crazy Fingers >
(foolish heart & Other 1 tease jams) >
Dark Star (that kind of petered out)
Dire Wolf
Tom Thumbs
Into the Mystic
Women Are Smarter
Set 2-
Passenger >
Hell in a Bucket
Althea
Eyes >
Drums >
Space >
Days Between >
Dark Star (2nd half completion from first set)
One More Saturday Night
Encore-
Box of Rain
Bus update:
I have received my window rubber from BusDepot, though I don't plan to do anything with it any time soon. I got a bus cover from them as well, so, if the bus has to sit another winter, at least he'll be covered.
After talking with a few other bus owners (and my wife) about the under-belly radiator, 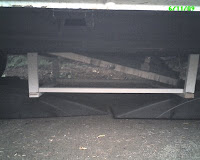 I have been convinced that putting it up in the luggage rack is a better idea. The mock-up really brought into focus just how low the clearance would be. One fellow bus driver pointed out that Hapy will be camping, and State Parks are known for tree stumps. That did it for me. So much for stealth, but I'd like to get home from remote camping.
We have cleared out a bunch of junk from the garage, making it much easier to get things done out there. I am hopeful that this will translate into more consistent progress. I find I have to remind myself that the bus work is supposed to be partiall about the process and not just about the goal.
Posted by PdxPaulie at 1:32 PM 1 comment:

The drive out the Gorge was pretty and somewhat uneventful. We did carabus with my neighbor and one of his friends (the green & white weekender in the front of the last picture in the last post), but we split ways somewhere along the way. IIRC, the GPS unit had us divert onto RT22 for a short period and then back onto highway 97. The others stayed on 97 the whole time. It didn't really matter in the end, though, as we eneded up camping about 50' away from the double cab and the weekender. We made a final pit-stop at a rest area about 20 minutes from the venue and met some folks from Canada. They turned up about 40' away from us in the camping lot, and we hung out quite a bit over the weekend.

The camp-zone setup was pretty chaotic. Imagine thousands of cats getting 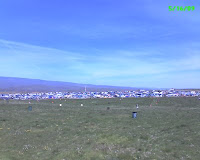 herded by about 50 shepherds. The venue had painted lines on the grass where people were supposed to park (nose-in). Then, there was a presumption that tents would get set up behind your vehicle. If everyone did this along a line, cars and foot-traffic could flow. There were no-parking zones painted on the ground in a rectangle around the portapotties too. As you might expect, those lines were adhered to even when the parking lines were completely ignored. It actually kind of worked. It worked waaay better than the camping lot at Oxford Speedway in the late 80's, I'll say that much.

That first night was just a lounge-about. We set up for the weekend, popped some beers and grilled kabobs while listening to our stereo combat the stereo's from the neighboring campers. As ususally is the case, the folks with the nicest system (or playing the best bootleg selection) won. It wasn't us; it was the guy across the way with speakers on top of his car. He was playing 70's-era (wall of sound) shows, so there was no complaining. Besides, it was going to be a long weekend, and we only had so much battery. It got cold after sun went down. We were glad to have our little propane heater - we were able to hang out much later.

We were awakened the following morning by a bunch of locals (from "Yak") that were parked across the path from us. They, like some group of locals at practically every venue, 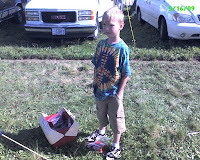 came il-prepared: no camping equipment, no food, little money. They slept in their car and were awakened by the sun. So, they resolved to yelling, perhaps trying to touch their inner-rooster. We fired up the stove for coffee/tea and my wife cooked up some eggs, IIRC. We walked the lot, visited with our friends, and shut the van for the show. The Doobie Brothers were going on at 3, and we wanted to find a flat grassy spot with a decent view, so we headed for the venue around 2. I don't think any of us were terribly interested in the Doobie Brothers, but if we had waited, we would have been dancing on the slope -> shin splints.

I'll post the set list next time. Pictures...
top: view of the filled camping lot (A) from the empty camping lot (B). Oddly, the venue filled the lot without running water first, and loaded the lot with running water the moring of the concert. Not sure of the logic there.
bttom: boy wandering the lot the morning of the show. He was selling candy bars that looked like the plastic-wrapped bars kids sell for their school. He said it was a benefit of some kind, and we bought a few.
Posted by PdxPaulie at 8:50 AM No comments:

The weekend after the trip to Mt. View, we hit the road again into the Columbia River Gorge to see the Dead again in George, 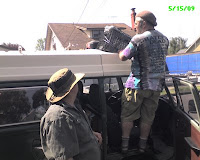 Washington. Some say it's Quincy Washington, but either way, you're out in the high desert. Concerts at the Gorge Amphitheater are different from most others in a few ways. First, it is in the middle of nowhere. So, it takes a while to get there, and there's no one around to complain if the band plays "too late". Second, it is one of the few camping venues left. If you pay $20, you can camp overnight in the grass parking lot (watered with those large argricultural sprinkling systems) with thousands of your fellow concert-goers. I'm sure this has a positive impact on their beer sales. Anyway, we drove up the day before and camped both the night before and the night after. Like the last few posts, I'll upload some pictures going to, at the venue and heading home. 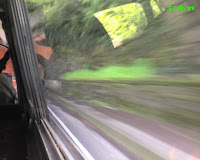 Unlike the drive down to CA, we had a 4th passenger with us (my wife), making the drive and the company all the better. My folks stepped up and watched the boys for the weekend, so we had no issues on the home front.
On the bus-work side, I've been making steady headway. I bought some MDF (compressed cardboard-ish building material) sticks at Home Depot for less than $.50 a foot. I think a 1" x 2" x 6' stick cost about $2.80. Anyway, I constructed a mock-up of the radiator mount using them. Its pretty simple: 20" across, 6" drop from lower front edge of radiator to floor, ~26" long. I should have done this in 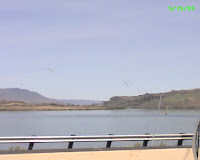 the first place. Some simple measuring lead me to give about 2.5" of clearance from the front edge of the top of the radiator to the underside of the bus floor. This should give adequate room to manipulate hoses, as well as give the exhaust air some space before existing the rear. I mention the 6" drop above because that is how far below the bottom edge of the under-belly the radiator cowl will hang. Since the belly was over 11.5" above the ground, I still have over 5" of clearance. My Jetta has about 3", so I figure I'm ok for speed bumps, etc.
After fabricating a mock-up, I was able to get the unit under the bus and held into place from underneath using my ramps. This gave me the opportunity to look at how th radiator would be in-place, and make design adjustments. I think the clearance will be fine in terms of road exposure, and I can reach the hose bibs. The exhaust side looks really big too, so I think I'm a go. I'll accumulate some steel this week and try some welding this weekend.
Pictures of the mock up, it in place with th rad, and maybe some welded stuff later on... picture explanations:
top: Mike and Ed wrestling the spare parts bin and camping kitchen into the forward luggage rack. Both ended up being very important.
2nd from top: leaving the lush Willamette Valley side of Mt. Hood / Columbia Gorge, right before the tunnel. cool looking melty picture.
2nd from bottom: crossing the Columbia, I think. Either that or we were just down by the river's edge.
bottom: our neighbor and his friend doing a carabus through Central Washington. That is one nice original double cab.

Posted by PdxPaulie at 4:07 PM No comments:

As promised.... here are a few pictures from the drive home from Mt. View. I 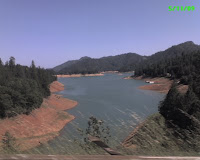 n the meantime, there's been talk about another run in late August down to Eugene for the Rat Dog show. Not sure if that will happen.

On the bus work, I have applied the Rust Encapsulator to the underside of the bus where the radiator unit will be going. I will spray some high-temp paint on top of it before I get the radiator in there. Like I said in the last post, I bought a welding helmet, some 1/16" rod and a monster magnet for the fabrication to come. I picked up some MDF sticks to construct a model of the radiator unit. I should have started this way in the first place, I could have been much further along by now. Lesson learned. Once the mock-up is finished, I'll test fit it into the bus. I'll snap some pictures along the way. Oh, I almost forgot, I bought an emergency pusher-fan to go inside this unit in case the temps get too high for the stock fans to handle. 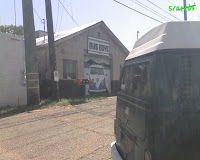 top: Lake Shasta. The water levels look awfully low to me for May. The folks at the small store in Lakehead didn't seem concerned, though.

middle: Belle in front of Bus Boys. I picked up a new rear driver-side window there - this one won't have that little flapper window at the front.

bottom: We don't know what mountain that is. On the way south, we thought it was Mt. Shasta, but it does't have the dual peaks. It was too far South to by Mt. Ashland (we think), so we're at a loss. 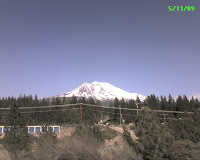 Posted by PdxPaulie at 11:34 PM No comments: