the wheels on the bus go round and round

We're at the end of the time period I thought we had before the weather changes. 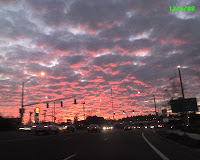 Based on the forecast, my dates may have been about right. Monday is Columbus Day, and, to me, that has signified the beginning of the rainy season in the Pacific Northwest. The weatherman says we should expect rain starting Tuesday through the end of his time horizon. Unfortunately, we're not done with everything, but that's ok. Today, we've got moving the bus, a little more welding, and dealing with drive-by-wire.

First, I haven't received any pictures of the Bussy the Busaru. I hope the owner is okay. I haven't gotten a response to my plea for pictures. I'm glad to see the level of interest in his project, though, and I'm sure that will translate into a nice sale price for him eventually.

About Face
Yesterday, I was able to get Hapy turned around by pulling him with my Jetta using a trucker's chain. Sometimes, I forget a VW bus is nearly 2 tons, so trying to push him by hand just isn't reasonable. I tried though. Boy, I tried :) I was able to rock him a bit, and get him about 12" up the slight incline of my driveway, but I could feel my muscles after that little bit. I found the tow-loop on the rear left side of the Jetta, and used the tow-loop on the front of the bus (or the rear bumper mount) to move him around. I had him facing the right way in about 15 minutes.

Hal's Tower
Hal arrived before I got home from taking the younger one to a birthday party, so he got to work on the tower. He widened the bolt holes, and got a good test fit in as I arrived. We pulled it back apart, and he welded on the cap on the "other" side / top before taking off. 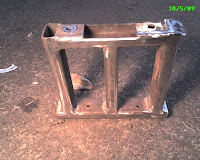 See the picture here for reference. You can see where the right side has a cap. Well, he welded on the cap for the left side. The weld needs some grinding, so, if I have time this week, I'll attack that.

Drive by Wire
Between the test fit and the cap weld, we looked at the drive-by-wire problem. The 1998 TDI engine (code ALH) came with an electronic throttle system called drive-by-wire. The entire engine control system is computerized. The throttle is a big fat spring-loaded resistor connected to the accelerator pedal by a pivoting bar. Between the bar and the resistor is a small rubber bit that pulls on a semi-circular metal piece that rotates the resistor. I can't find the picture that I took of the accelerator pedal housing, but its a huge (12" x 12" x 4" all told) steel bit that basically holds the pedal and this resistor in a specific position. We thought this was going to be a big deal. Once I pulled the front belly pan off, though, and we started looking at it, we weren't convinced it was going to be much of a challenge after-all.

This picture of inside the front belly pan 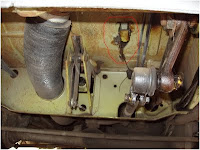 was taken from another bus owner's website as I didn't snap a picture of mine. I'll do that and replace this picture later. I hope Jason doesn't mind. Near the top of this picture (I circled in red) is where the accelerator pedal passes through the floor. The pedal connects to a simple rotating bracket that connects to a cable. After cutting most of the original (VW Beetle) steel bracket off, we retained the part the resistor attaches to and a little bit for mounting to the underside of the bus. It seems that the hole in the "small rubber bit" is about the same diameter as the hole the bus accelerator cable connects to. With some careful placement planning, we should be able to tie the resistor action into the stock bus pedal mechanism. I'll get some pictures this week of all of this stuff.

There is chatter about putting the resistor in a place exposed to the elements. In the original placements, the resistor is inside the passenger area. I'm going to move forward with it within the belly pan. I'll seal the pan to the body and close the drain-hole.

Last, Hal and I put the bus cover on. For background, I bought this cover from BusDepot (covers category) last Spring after I saw what siting in the elements for the Winter did to Hapy's top. If its going to pour rain for the foreseeable future, I'd like to protect Hapy a little better than I did last year. That's it for today.

Pictures:
top - taken of an incredible sunset less than a mile from my house out the windshield.
middle - the engine mount "tower"
bottom - inside the front belly pan
Posted by PdxPaulie at 8:43 PM