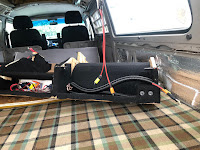 At this point, I wanted to finish the wire routing, so the rear-facing area was as tidy as I could manage. I ran the power and ground wires for the USB chargers out through the hole I had bored for the left (front is front) speaker wires, and routed them up the outside of that inner support, setting them immobile with staples. The speaker wires got covered in that black plastic wire wrap so they will not get caught on anything that is set on the rear-facing shelves and, because of all the black carpet, they will visually disappear. I verified that I had enough USB supply-side wire to reach the mid-point above the center shelf, added female wire connectors to them and then popped a chair-connector onto those connectors.
Out at the bus, I added a male wire connector to the orange wire, completing the set up for the headbanger wiring. I also made sure that the speaker signal supply cables were long enough to drape over the right speaker, where the wires in the bus are. In the picture on the right, you can see just how much extra speaker wire I have hanging down from the bus ceiling. Why? So I can connect things before mounting the headbanger and then tuck the extra up above. Also, by having such long speaker wire leads heading to the stereo, I could unplug the headbanger and plug in a pair of float-remote speakers. Will I? Probably not, but I saw little harm in creating the option.
I was almost ready for the shelf. This was complicated a little bit by the OSB supports I had made. I wanted them to visually disappear, so I spent some time cutting and shaping small bits of trunk carpet to cover them. Finally, the shelf went in, as evidenced by the pictures above. Unlike the glue-on and staple fun of the USB charger face mounting, I wrapped the shelf with carpet and pushed it into place from the front. It is effectively held in place by friction.
The keen eye will notice that the trunk carpet needed some perfecting and trimming. I will address that before I get after the headliner install... which will wait until next time / later. I am feeling the time pressure, and feel the need to get this buttoned up soon. Phil and Friends is coming up fast and we don't have any interior lights or a stereo. So, this is where I am leaving the headbanger for now.... sitting on the rear of my US General rolling tool cabinet. I will get back to this, just not for a little while, probably. LOL's.
That's it for today. Thanks, as always, for following along-
Posted by PdxPaulie at 8:00 AM 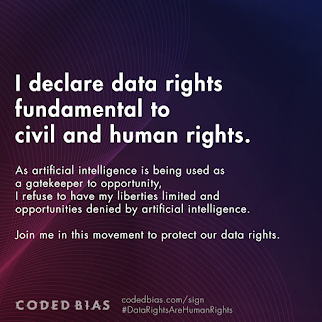