More on that Speaker Box

I've continued to tinker on the box I started over the Summer (see MGB Gets Sound). Today's post covers some of the headway.

Sub Hole
I had about 2 hours of forecasted rain-break on a Saturday that also coincided with a reasonably good game of college football. So, I was torn, but I figured that I could do something on the box on the back patio and sort of keep track of the game through the sliding glass door. Yes, this sounds like a set up that ends with a board sticking out of said glass door, but actually, it all went relatively well. I started with measurements to find the exact center of the rear of the box. Centering on that with a compass, I drew a 9-inch diameter circle to cut. First, I set the panel on the box with the drawing side facing in, so I could check my spacing, and sure enough, that would have been a miss. Because of the bump in the center of the rear frame of the MGB, I have a corresponding bump in the box. To account for that, I need to slide the 9 inch hole towards the top by a half-inch or so. Another quick turn with the pencil, another upside-down check and I'm ready to cut.

I drilled a pilot hole with a drill bit that was just larger than the saw blade. Then, I made the mistake of thinking that cutting the hole on a bias rather than at 90* was a good idea. Big picture, I may have retained a little more meat of the MDF, but it created a lot more fit challenges. Anyway, I cut the circle and test fit the subwoofer (still in the plastic bag to protect it from the dust). Yeah.. it fit through the top fine, but hung-up on the inner part of the circle because of that bias. To remedy, I attacked the inner lip with various tools: a file, the Dremel, sandpaper.. Eventually, the inner edge widened out and the sub fit. Word to the reader: don't cut on a bias; follow the directions from the sub-woofer manufacturer and trust that when they say the hole needs to be x in diameter, they mean both the top and bottom edges unless otherwise stated. With the sub capable of fitting in the box, I switched back over to the 6x9's.

Re-enforcement
The sub-woofer sites stress re-enforcing the edges of your box because of the force the speaker will exert upon it. I used some of the scrap MDF from the box construction to brace the corners. I've toyed with more bracing in the middle of the box. I may hold off and see how it performs before gluing the rear panel, and sealing my fate. 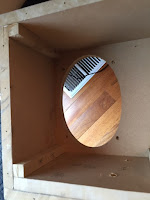 I had 2 things I needed to resolve with the 6x9's. First, the box needed threaded studs on the outside so the 6x9 could be attached and replaced from the outside. For this, I found some 1" long bolts that came with some kitchen drawer knobs. These are thin enough to easily fit through the mounting holes on the speakers, but don't protrude too far past the MDF edge to present fitting issues later. Best of all, I have 8 of them. So, I pulled one of the 6x9's from the rear firewall, test fit in the box holes, marking where the mount holes are and set it aside. A few quick runs with the drill, and I was threading the bolts through from the inside. I test mounted the speakers, and they will work great. I will need to be careful about carpeting, though, as the bolts really don't stick out very far. I may need to trim the carpet at the speaker edge rather than wrap through the hole. We'll see.

I then pulled the 6x9's out of the box and started test fitting the box into the trunk of the MGB. Post-assembly, the box is a smidgen taller than space would allow. Enter the Dremel again. I shaved down the front corners to fit under the fuel tank vent lines, and, after a couple hours of fiddling, I was able to get the box flush against the rear firewall. Once I had the box exactly where I liked it (dead center), I reached through with a Sharpie and marked where the 6x9's would need new cut-outs in the rear firewall. Recall that this firewall had been cut up pretty badly by the PO and I slapped together something to make it less crappy. Now, with these new holes, it is PO-level of crappy again. I'll need to do something eventually to make it nicer. Anyway, I cut along the Sharpie lines with my jig-saw. With the speakers back in the box, I set the box into the trunk against the firewall, wired up the speakers with the version 2 wires and tested the system.

We have sounds again. I spent most of a Saturday getting this far. I'll post next time on getting the rest ... or maybe just a little more headway... done. Thanks, as always, for following along-
Posted by PdxPaulie at 8:00 AM