I'm probably not the only one asking that this weekend. All those great plans we made over beers during Cinco-de-Mayo turned into timing conflicts and over-scheduling, resulting in less than planned getting done. At least that's my story. My last post was almost 4 weeks ago, and I apologize for not sharing along the way. I'll bring you up to date on things. We still have almost a week of May left, and this weekend is open, so let's get crackin!

Boys and Beaverton
The pattern of the boys being with me on Tuesdays and every other weekend has worked pretty well. With school nearing a close for the Summer, schedules rotate a bit and I'll have them every other week instead of this night, that weekend as it has been. We'll go back to that when school re-starts. Between lacrosse practices and games, our time together just hanging out has been constrained. We still have lots of fun though. They've really settled into it, and I still greatly enjoy hearing their voices whenever they're here. I think in some respects we're actually closer than we were before.

Harnessing the Electrical Demons
Even though settling into this new place has taken twice as long as I expected, I was able to attack the engine harness problem. After unwrapping nearly all of the harness tape, and checking the connectivity on about a third of the wires prior t 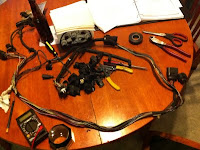 o that (before finding a breach), I found the problem. It seems that when the engine was removed from the donor, Jason (the guy I bought the engine from in GA) pulled a little too hard on the harness when it got caught on something. Within the taped up wires, there was a crimp that cover-bared a few wires and cut through a couple. Ah Ha! This was a simple fix, once found: strip, twist together, tape heavily and tightly. Since 80% of the cloth tape was removed to expose the broken wires, I re-taped it - this time with blue cloth tape It'll kinda match the final paint color now.

Installing the harness was something I was concerned about. The last time I wrestled an engine harness into this bus, the coolant temperature sensor was such a bear to connect. 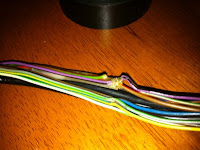 I did it wrong a few times back then, and even ended up with the coolant sensor not fully seated at one point. Removing Justin's borrowed harness was surprisingly easy, simply threading or peeling the harness out back to the cabin pass-thru. Installing the original (now blue) harness wasn't nearly as much trouble as I expected. Working from the end (oil pressure sensor), through the 10-pin plug to the coolant sensor was a snap. I needed to think a bit about the coolant sensor, and cram my arm under/around the intake, but it snapped into place with a satisfying "click". Routing the rest was easy now. In fact, with the custom intake, it needed a different route than was originally there, and different from the good-enough-for-now placement we did with Justin's harness.

Charging along
When I moved in, there was a lot of chaos. During that chaos, I didn't turn the key all the way off after parking the bus. So, the battery ran down to empty. Doh! Adding insult to injury, I misplaced my battery charger in the move too. This did give me the opportunity to 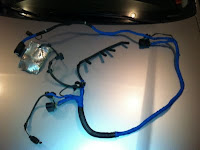 dig through all my garage boxes, underscoring the need to unpack in there. I need shelving first. Sigh. The fun never ends. Anyway, it turns out that my kids' mom lent my charger to a neighbor before I moved, which is why I couldn't find it. Now that I have it back, I'll be charging the battery this weekend. I also need to fix the cab-to-engine-bay starter switch. For some reason, it didn't work on moving day, and I had to use the remote starter switch.

So, for today...
In an earlier post, I made a punch list of all the things I need to do to have the bus "complete". Clearly, I won't get all that done before camping season starts. I need to get the electrical working reliably, and get the clutch adjusted so I can test-fly. If I can, I'll attack the strip / clean / re-install of the interior too, but even living on my own there are limits to how much time I can create for this work. After I post this, I'll be heading for the garage for the day. With good fortune, I may have a lot to report later this weekend. Thanks for following along-

pictures:
top - harness surgery. lots of tools, reference material. most important: kitchen table
middle - the "crimp" where the broken wires were found
bottom - harness ready for install, sitting a-top my other VW's hood.
Posted by PdxPaulie at 9:45 AM