It's been an interesting couple of weeks. I've moved, and started getting settled in. I've gone from seeing my boys every couple of days for a few hours at a time to actually having them stay overnight. This new-ish life is starting to take a shape, though I can't tell exactly what shape it is yet. I'll try to be brief on the chronology.

I got the keys on the 12th, and started moving in the flotsam from my folks place by the car load. I had the boys that evening, so we had a pizza-picnic on the carpet. They tried and approved of the pool. Great start.

Moving Day
The following weekend I moved the big stuff. I scheduled the move weekend without considering work impacts (not wise, but that was the available day). So, while moving things out of the garage, I got a call 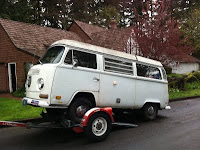 from work about some kinds of problems. Perfect. I got through the U-Haul rental stuff in record time, and then I was sidelined with a firefight. boo. Fortunately, by the time my helpers arrived, the panic at work had passed and we were back on track. Big thanks to my brothers and my folks for helping out. Before noon, we had the truck loaded and the bus on the tow dolly. 30 minutes of caravan-ing later, we're in an office park across the street from the new place. I dropped the bus there (and the tow-dolly), so we could empty the truck. By 2:30, the truck was empty, and the bus was snuggled into his new shelter. eye-witnesses tell me there was a good 5 inches of clearance above his roof as I backed him in. That gives me the room for bigger rims and the Riviera poptop... maybe.

Life Rhythm finding a Beat
The 14' truck carried a small subset of what's needed to create a home.

That's where my sister-in-law jumped in. While I was returning the truck, she and Tim (a friend helping on the move) hit Ross and created an insta-home with dishes and decorations and stuff. Crazy. I was totally floored. We truly are measured by the depths of our relations, not by the content of our bank accounts.

Still, I didn't have the things needed to host my boys, so for the next 2 weeks, I saw very little of them. As much as I wanted to be enjoying the new-space creation, I missed them so terribly, it was very hard to. Work was chaotic, with a major release looming and budget cuts rumored. I was in a very negative emotional space. I pressed forward, though, locating the final items to host the boys, and finally having them for a sleepover this past weekend.

It is hard to describe the emotion of hearing them together in the morning when I got up. 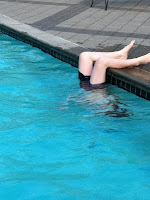 I can't tell you what exactly they were talking about, but it doesn't really matter. From the top of the stairs, I could hear quiet voices and giggling.... made my heart leap. It really felt like home. The morning of cereal and hanging out topped a weekend that included C shooting a hat-trick at his lacrosse game and a family get-together (uncles, aunts, cousins, grand-parents) to celebrate T's 13th birthday. Dropping them off was extremely hard, so I worked it out at the gym, like I used to. I'll have them over on Tuesday for the first week-night sleep over. It will be interesting to see how that morning goes. Now that it's started, though, I can make it through those days without them.

Thanks for following along. I don't have the boys this next weekend, so I may start looking at the bus as soon as Saturday. We'll see. Then, you just might hear about that progress again :)

pictures:
top - my helpers taking a break by the truck
upper middle - bus on the dolly
lower middle - bus and car in their new home
bottom - T hanging out (mostly) in the pool
Posted by PdxPaulie at 9:12 PM

Howdy, a buddy just informed myself relating to this webpage so i thought i will arrive and consider a appear and also present my own self, Seems an incredible internet site with a ton of associates!