As I hoped, I was able to hit it hard this weekend. I mean hit... it... hard. Some 3-day weekends can be a mis-spent Saturday and then 2 Sundays - nothing gets done, and you laze around. This wasn't one of them. This was more like a Saturday sandwich with a mini-Sunday in the middle. I did too much to cover in one post, so I'll spread it out over a couple.
So I said how the battery was dead on Friday. After slow-cha
rging (2A setting) all night, it was still half-dead, so I let it be and switched to
othe
r things. 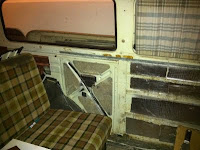 Now, first on the list was adjusting the clutch. Of course, that slid right off the list for the weekend. hahaha... so much for priorities. Well, hear me out now... I figured I couldn't really get the electrical done until I straightened up the wires I ran from back to front. That meant pulling the driver-side cabinets out, but first, I had to empty it of all the parts I jammed in there for the move. Yeah, when I said I didn't unpack the garage, that included the bus. So, anyway, I yanked all the crap out and then set to pulling the stove/sink unit and the refer out.
Interior Removal
The late-70's units are not held in by much. I kinda forgot from when I installed it. There are 2 Phillip's head screws behind the driver's seat passing through the partition into the stove/sink cabinet. 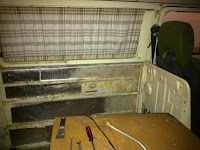 One of the screws that holds the top on the refer feeds through into the side of the stove/sink cabinet. The only other thing holding it down (other than weight and gravity) is a bolt through the floor inside the left cabinet door near the hinge. Now, out the backside there's the gray water vent and down through the floor there's the waste-water outlet. Of course, if the propane and city water are hooked up, they're in the way too. The only way to remove the cabinet and not break or scratch things is to slightly tilt it forward so the vent clears and then lift it straight up. Its heavy, so get a friend to help you or you'll feel it the next day - like I did :)
The refer is held down by even less. Like the stove/sink, nothing is holding it to the side. 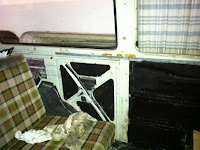 There's at least one (may be 2) screws again from the refer going into the rear closet. Like the sink/stove, if you're gonna remove it (and not the bed first) without scratching it, you need to lift it straight up. It's heavier than it looks with the fridge stuff in there. Then, the fun started.
Insulation Rip-Out
Behind the cabinets I had put in some cellulose-based insulation. Not a good plan. That stuff absorbs water and can foster mold. Surprisingly, after 4 years of nearly constant rain, and very little fresh air to dry the bus out, the insulation was not in any way compromised. I don't think it even got damp, much less wet. Still, I plan of keeping this thing, and I don't want to take chances. 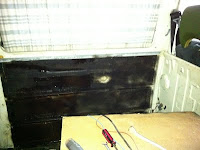 So, I pulled it all out, scraped the fuzz off the interior and shop-vac'd. The little bits I couldn't get off had to be dealt with. I still had a can of rubberized undercoating, so I shot the walls with that.
That was Saturday. I'll post the rest of the weekend at some point this week. It's a short week, though. I've got the boys tomorrow night (yes!), and I'll be watching the Bruin/Canucks Stanley Cup Final game 1 on Wednesday (stop by if you're local. should be a great game). Before we know it, the weekend will be here again.
pictures:
top - after refer removed, insulation taken out
upper middle - after sink/stove tipped onto its front, insulation taken out
lower middle - after interior shot with rubberized undercoating
bottom - after interior shot with rubberized undercoating
Posted by PdxPaulie at 8:03 PM