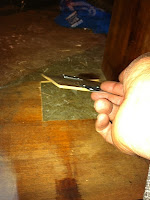 Brief post today. It was pouring rain this weekend, so I wasn't all that ready to work outside. So, I did some finish work on the rear cabinet (in my garage), and got the rear bumper installed when it lightened to a sprinkle. I'll have to remove it again to paint it, eventually, but Id rather have the bumper on the bus for the test drives.
Access Panel
As you can see from these pictures, I cut a small square access panel out of the bottom of the unit. Its about 4" square. When looking at the rear cabinet from the rear hatch (it would be on the left side), this hatch would be reachable through the bottom cubie. Under the hatch, I plan to have the original ignition, so I'll have a remote-starter capability.

OBDII Sensor
Those little metal squares will just hold the panel in place - as in keep it from falling into the spare tire-hole. In the picture that doesn't have my hand in it, you can make out where the OBDII port will poke in. Again, its in the bottom cubie, but on the forward wall. Once the engine is running right and the cabinet is re-installed, the OBDII connector will fit into that black housing. Since most, if not all, of the times I'll need to plug in a laptop I'll be looking at the engine, it seemed reasonable to place access near the engine. Still, we wouldn't want to disrupt the look of the cabinet, so its buried. 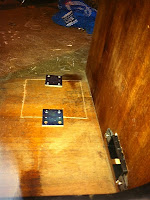 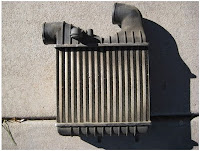 Otherwise, I got one of those Saab Blackstone inter-coolers off of eBarf. It looks good, arrived a little dirty, but the cooling surface looks larger than the stock one, and as you can see the input/output ports are both on the same end. I'll take some measurements and some side-by-side pictures with the stock one later on. I hear it may not rain tomorrow night or maybe Thursday. If the rumors hold true, I may get out there and start seeing how it can fit under the engine bay. If I can get a good strong fit, I can plan the air routes and get the silicone pipes on a truck before the Christmas shipping rush really kills package movement. We'll see.

Thanks for following along. Oh, it looks like the snow on Mt. Hood is getting really good. I may need to take another day at Meadows before Christmas... but then I definitely won't be test driving before NewYearsEve. Grr... the snow will have to wait :(
Posted by PdxPaulie at 5:47 PM