We had heard about another festival, so today's post is about the getting there. Yes, that's right, it's just about the drive there. I'll have at least one about the festival itself and then another one about the drive home. Before I start, Hapy birthday Dad. We would love to bring you on one of these journeys with us, but in the meantime, here is another example of how getting there (and back) is the true adventure when it comes to going to festivals Hapy-style.

First, What's This Now?
So, when Boo and I were at 4Peaks in June, we uncharacteristically bought a couple of plates of tacos while Andy Frasco was playing the tent stage. We approached the small set of tables, and asked if we could share a table with a woman who had one to herself. Brenda, the woman at the table, introduced us to a smaller benefit festival just 30 minutes south being held around a month later (see the 4Peaks 2019 Festival Report). When we got home I got tickets, and shortly thereafter we discovered that Boo had a family obligation on festival-closing-Sunday that she couldn't move, nor cancel so it prevented her from going. She couldn't get Friday off work anyway, so she strongly encouraged me to go. After trying to get one of the kids to go with me, I decided to fly solo. 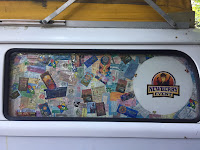 I worked from home on Thursday, thinking I could get a jump on traffic, after packing everything except the food the night before. Once the clock hit 2:PM, I had hit my 32 hours for the week (plus 8 time off the following day meant I hit my work obligation). So, I quick-packed up food into a cold and doesnt-have-to-be-cold coolers, loaded them into Hapy, and split. Now, in retrospect, my planning / packing could have been a little better managed. I failed to recognize that I did not have a washtub nor a pillow, but that became apparent once I'd arrived at Newberry.

I got ice at the corner market and cruised to OR217 south. Similar to our last drive to Central Oregon, Hapy dropped into limp mode a couple of times and I noticed some lethargy or what almost felt like engine misses. I made a mental note to consider causes and turned off the radio so I could monitor more closely. OR217 was not terribly heavy, but it was busy. By the time we hit I-5 south, it was busier, and it got heavier and heavier until it was a 20mph crawl past Tualatin and Wilsonville. Things got going by Aurora, and soon we were moving at 60mph*. Along the way, I noticed that my temperature climbed faster than I remember on it's way to normal, and then I had to play speed games to keep Hapy under 194*F. This persisted until I pulled over in Idanha. I discovered that only one fan was spinning. After a quick wiring service, and a couple of bee stings on the top of my foot for the trouble, we were on our way again. Yes, bee stings on my foot. I guess that's one of the unspoken hazards of driving in sandals. They hurt bad, and gave me all the more respect for Boo having gotten a tattoo on the top of her foot. That tattoo must have hurt so bad.

Anyway, Hapy got hot again (198*F) even after the fan wiring fix, so I found a shoulder and pulled over again. Hmm.. both fans are spinning, and hot air is blowing by.. So, I pulled back onto the road again... the temp climbed again and within 20 minutes I was on the roadside again. This time, I watched the temperature drop and concluded I was pushing him too hard. Maybe there was a headwind, or driving during the day really does influence his ability to shed heat. Either way, I would drive slower, and pull over periodically to let cars by if the passing lanes weren't coming along often enough.

This pattern continued all the way up the Cascades, the full length of OR-22 and up the US-20 to the Hoo Doo ski area, where I pulled over to let other drivers by. At this point, the drive shifted to downhill, and Hapy's temperatures settled. I was able to roll at 65mph* all the way to Black Butte Ranch without the temperature climbing above 185*F. So, I started to discard the headwind and daytime driving theories. This was an engine-under-load-cant-shed-heat-into-coolant-fast-enough problem.

So.. what did I change since the last drive? Well, I changed the oil. Did I not fill it all the way?
I also added the engine cover. Could that be trapping a bunch of heat? 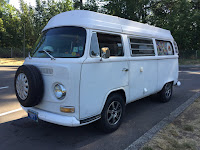 Regardless of cause, I rolled through Sisters and Bend not needing to pull over because traffic was so slow that I wasn't stressing the engine enough to produce heat spikes. I wasn't stressing myself, either. I knew that on this trajectory, I would have at least an hour of daylight to set up. Feeling confident, I turned the stereo back on, and noticed that the rear speakers weren't making sound any more. "Whatever," I thought, "something to clown on in the campZone." Besides, the fronts were working fine and I was sitting in the front so who cares?

Shortly after leaving Bend on US-97 South, the number of trees increases. For those not from around these parts, west of the Cascades is the classic wet, rainy Oregon you've probably heard of. East of the Cascades is high desert: something like 4000 feet above sea level with little in terms of tree cover. This is especially true once you get east of Sisters and into Bend. I have been north of Bend, all the way to Madras, and it's all like that. So, I falsely assumed that I would see no change to the terrain when I went south. There be trees. It became much more forest-y the closer I got to my turn-off (north of La Pine). Now, it doesn't seem any less dry, so maybe this area just hasn't been cut down, or maybe there are underground water sources. I didn't know, but I was happy to see the trees because trees mean shade and when you're heading into 4 days of mid-summer sun in the high desert, natural shade changes everything. After a few quick lefts and rights, I arrived at the Newberry Event at 7:30. Total drive time of just under 5 hours.

Theories and More Theories
Friday morning, I went around to the back of Hapy to test a couple theories. First: did I short Hapy on oil during the last change? No. The oil was at full on the dipstick and he was parked level. Okay, Second: could the engine cover have been trapping heat? I removed the cover for the drive home to see. Last, I checked the fans again, and when I flipped the switch they both were spinning. Hmm.. Without meaningful internet connectivity, I couldn't really look for more ideas, but I was left thinking one or more of a few things could be going on:

1- when I had the wrong coolant in for a short time a couple years ago, it put a glaze or film in the coolant passages that is preventing the conduction of heat from the metal into the coolant. A chemical flush should fix that.

2- the engine isn't running right, producing more heat than it's supposed to because of something out of normal. I may need Justin to help diagnose that.

3- the radiator is too high, and if lowered, would help dump more heat faster. This is a bit of a stretch since we dump heat fast when we're stationary.

4- no amount of tuning on the cooling system is going to fix this because the real problem is the oil is getting hot and it is not getting temperature controlled sufficiently through the oil/coolant exchanger. This would drive to an aftermarket oil cooler add-on or a larger exchanger.

It was with these thoughts that I left the festival on Sunday, shortly after 1. Like so many of my posts lately, this one got long. Needless to say, the adventure continues, and I'll post about the trip home soon.
Posted by PdxPaulie at 8:00 AM