After months of sporadic work, the speaker-box is finally finished. Today's post will go over the final few things I did to complete it.

Where Were We
When I last posted on this thing, I closed the post with "...after a bunch of hours with the Dremel and hand planer, the wall mate-points are smooth enough where I think it will be hard to see how out-of-alignment they are once covered with carpet. That's what I'll do for next time... as well as get some wiring in, and the 6th side of the box attached... and then the edges planed.... ". I had 5 of the 6 sides attached and planed, baffles installed. I felt ready for the final side, carpet, and wiring.

One Wire
The route from the wire cups on the right side of the box (front-is-front, so the "right side" assumes the 6x9 speakers face forward and the 10-inch sub faces rear) to the left 6x9 speaker needed to go through a baffle. The other wires, for the sub and the right speaker, were not so constrained. So, I left those wires out until after the carpet was on. For the one, left, speaker, though, I drilled a hole through the baffle, threaded speaker wire through, and then routed it along the bottom seams to the wire cup. I glued it into place so it wouldn't flop around, nor create an internal vibration. My concern about a vibration may seem a little without basis, but I thought with a wire that was running the length of the box, it might find it's way against the sub woofer cone. Regardless, a few extra minutes and some wood glue was a very small cost. I filled the speaker wire drill-hole with glue on both sides as well.

Rear Panel
With that one wire installed, the rear panel could go on. When I set the panel in place, I could see gaps that couldn't be resolved with wood screw force; I needed to plane the edges of the side panels. To get things flush, I started by setting the panel on, and marking the high points on the sides with a pencil, and then planing those areas down. I repeated this process a few times; each time taking less material between checks. I was not aiming for perfection, rather close enough to fit where I could make up the difference with torquing down with wood screws. Otherwise, I would have spent many hours clowning with perfection. As it was, I spend about an hour planing before spreading generous wood glue along the edges and setting the panel in place. I swiftly applied wood screws around the edges, using more screws on this panel than on the others to get it to set flat.

I tested the seams with a flashlight, shining it from inside the box (hand through the sub-woofer hole) to confirm that the seal was good. To my surprise, it worked quite well. Maybe having a pilot hole every few inches isn't a totally bad idea. Once the glue had dried, I filled the holes with spackle, waited for it to dry, sanded it flush and repeated 2 more times to make sure the holes were smooth enough to not be noticeable through carpet. I probably over-revved on it a little bit, but I'd come this far, and spent so much time on it now, a few extra minutes was not going to make much difference.

At this point, I painted the outside of the box black. I wanted to make sure the box was sealed, though afterwards I was concerned that I might have made it harder to attach the carpet. My thought about painting was that if I jacked the carpet, any open spot would be black instead of raw MDF, so it would not be as obvious.

Carpet
With all of the panels in place and all of the pilot holes filled, I was ready for carpet. I found some basic black trunk carpet online for about $8US for a 4-foot by 5-foot rectangle. This was about twice what I needed, but I bought extra with a plan to carpet the trunk of the MG with the same stuff eventually. So... how to carpet a box? Off hand, it sounds simple: you have 6 sides, so cut 6 pieces of carpet, glue them on. Yeah.. that creates 12 seams. I wasn't going to carpet the bottom, so it would have been 5 pieces of carpet and 8 seams, but still, that's way too many.

Instead, I mocked up a single piece of carpet that was shaped like a "T" using paper to construct a pattern (see pictures). Imagine the "T" upside down. That long side ran along the bottom edge of the rear and the two sides. The vertical part of the "T" wrapped over the top of the box and down the front. I cut the vertical part of the "T" wider by 1/2 an inch on each side so the edges of the top on the right and left sides would fold down and get covered by the side pieces when they wrapped around. This created 2 seams: one on each side along the top edge and down the front... and each seam was double-thick for a 1/2 an inch Once the box was installed into the trunk of the MG, you couldn't see them, and the seams are facing away from anything else in the trunk so the edges won't catch. 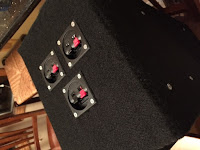 The carpet was attached to the box with DAP contact cement. This is nasty stuff, so I did this on my front porch under the overhang. Wear disposable clothes, and gloves because if the glue gets on, it doesn't come off. I followed the directions, thoroughly covering all 5 sides of the box (no carpet on the bottom, just black paint), as well as the inside of the carpet. Well, I did that best I could on carpet with a paintbrush. Using a glass tabletop as a guide for keeping the bottom edge flat and using my thumbs to mark where the sides were, I started applying the carpet to the rear of the box. Contact cement adheres on contact (hence, the name), so you really have one chance to get it right. I was able to get it lightly attached while checking the angles and had to adjust it once. After that, though, I started pressing it down into place, wrapping from the rear over the top to the front, leaving the sides flapping. Then, I brushed contact cement onto the little 1/2 inch flaps, waited a few minutes and then pressed the sides into place. This part of the assembly was probably the most nerve-wracking, knowing that misalignment during this process would make the whole thing look amateurish. Which, if I hadn't spent so much time on it, I would have been fine with, but now, I wanted it to look good.

Cut In
The contact cement needs at least 24 hours to cure. I waited a day for the stink to dissipate and then moved the box into the garage for a couple of days. Once I was confident that the cement was solid, I took an exacto knife and cut in the holes. I started with the wire cup holes, cutting across the diameter of the hole first and then laying the edge of the knife against the hole in the wood to direct the cut of the carpet. This worked very well, and allowed me to cut all of the holes without any mistakes.

Installs
With the holes exposed in the carpet, I was in the final stretch. I did the final wiring first: Laying out a length of wire for the sub and the right speaker, attaching wire ends and heat-shrinking. To these wires, I attached the wire cups, set the cups in the holes and then screwed them in place. The 6x9 speakers are held on with nuts, so the bolts which protrude from the box needed to be cut free first, but otherwise the wiring was straightforward and the speakers went in without issue. The sub-woofer had barely been out of it's box since I purchased it. It wired up and installed relatively easily, though. I needed to pilot the holes for the bolts through the carpet, and I did that by pushing a roofing nail through from the outside. Once bolted into place, I set the protective grill in place, and the box was done. 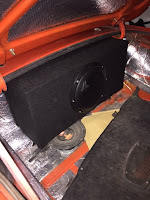 The construction could not be complete without installing and test-firing. So, I took the box out to Oliver and set it in place. It fit without difficulty, and the speaker wires easily reached the wire cups on the side. You can see the extra wire on the far side of the box in the picture here. There remains work ahead for wiring up an amp and wires for the sub, so I'll address the extra speaker wire then. In the meantime, I fired up the stereo (local metal station was joyously playing Ronny James Dio), and verified that all 4 speakers were running.

That's it for today. This post contains work effort that spanned a few weeks, completing New Years Day. I intend to paint the bottom of the box with some flex-seal so we can use the box outside, but that will wait a while. In the meantime, I'll be enjoying the sounds, and eventually getting an amplifier installed so I can power the sub.

Thanks, as always, for following along.