No, I won't post that dancing banana video from a few years back, but I will reflect on a valuable use for peanut butter that I didn't expect.

That's Nasty
When driving along, the air directly behind the vehicle creates a vacuum.  Car designers have worked all kinds of miracles in that area over the years, but with the old loaf-of-bread shaped VW bus, the vacuum is quite significant.  I've heard of water-cooled transplant failures caused because the builder put a radiator where the engine hatch is.  The vacuum made the radiator useless, unless the builder had the fans suck air in from behind, sort of leveraging the vacuum.  Even then, those installs look pretty atrocious and would pull all kinds of crap into the radiator fins, but I digress.  The vacuum grabs up water, road grime, dripping oil... and splats it on the rear bumper, engine hatch and rear hatch.  Over time, it gets pretty grimy.

In my bus' case, it was worse.  I mentioned the transaxle gear oil leak in previous posts.  That was bad.  On top of that, for a few years I was running the original tail lights and the old housings failed.  I was broke, so I held the tail lights on with duct tape.  Yes, the bus looked horribly ghetto.  I scored a pair of new (but not China-crap) housings from the BusDepot when they were on sale a few years ago, and replaced them.  I did not, however, clean up the old duct tape sticky residue left behind by the tape.

For the Greatest Shine You Ever Tasted (from the SNL Shimmer skit)
While cleaning out the garage, Boo came out from playing in the garden and started asking about the nasty back end of the bus.  We realized that once the newly painted bumper is put on, it will look even worse.  She ducked inside, and I went back to the garage.  A couple minutes later, she had returned with a fist of paper towels and a teaspoon of peanut butter.  "Hungry?" I asked.  "No, haven't you ever done this before?" she replied, and then proceeded to put a dab of peanut butter on the nasty duct tape.  "uh... what... are.. you..," was as far as I got as a response before I saw one of the 4 tacky squares which had been left behind by the duct tape had disappeared.  In a few minutes, all 4 of the big black marks were gone.  I was converted.  I left the garage in its not-yet-organized state and grabbed some peanut butter.  I polished the whole rear end with that magical stuff.  It acted like a cleanser-wax, cleaning the oil and grime while leaving a shine (presumably from the oils in the peanut butter).  Of course, there are probably lots of little peanut bits in there which would trash an otherwise nice paint job.  For original paint, complete with rust, patina and grease-finger prints, it is magic. 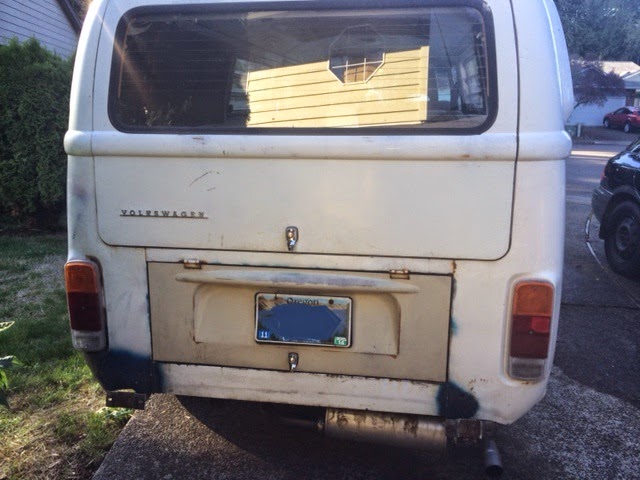 For kicks, I peanut oiled all of the little rust spots I had.  The petina-style rust didn't seem very affected.  Rather than a dull spot, it shined like the paint, but otherwise, it was about the same.  The rust which was a little deeper into the steel, though, did react differently.  The rust closest to the paint was unaffected, but as I moved more than a couple MM away from the paint edge, the rust turned silver.  Trippy.  I'll re-check those spots in a couple of days to see if that lasted or was just because the peanut butter picked up some of the body color and it simply attached to the rust a little bit.  Regardless, the experimenting was fun.

Like so may other times, I didn't take many pictures beforehand, but I do have one here of the back after it was cleaned.  Wow.  And there's a shine to it now.  Yes, the paint is still atrocious, but that's part of the ongoing work-in-progress.  The journey is the destination.

Of course, it rained all night the next night.  It will be interesting to see how long a peanut oil wax job will last in a NorthWest autumn (read: nearly constant rain or mist in the air).  Today, it really looks great.
Posted by PdxPaulie at 2:30 PM