I know, I just posted something yesterday, and I'm already posting again. I had to make a quick shout-out to DieselGeek for their unbelievable turnaround time. To be fair, the USPS, who I roasted in another post (FedEx Ground -v- USPS), 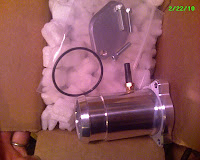 played a pretty large hand in it too. I mentioned in my last post that I had ordered a race pipe kit from DieselGeek. Well, that order hit the internets at 12:30 Saturday morning. Yeah, I was working late. Anyway, I got an order shipped message this morning, and the package arrived this evening. That's just crazy.

So in the picture to the left, here, that's the EGR valve replacement for the intake (race pipe) at the bottom. There's a nipple on there to attach a boost gauge. I hope that doesn't interfere, clearance-wise with the lid. Above that to the left is the seal. Near the top is a plastic baggie that contains 3 allen bolts for attaching the pipe and a diamond shaped plate (and gasket) for blocking the opening in the exhaust header. 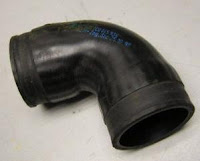 usual places (autohausaz, JCWitless, etc) don't stock it. A search on eBay only brought up that Kleiner Auto guy that over prices and then slaps a $8 minimum shipping for a dirty, possibly faulty, part. His price is the same as some others charge new. Regardless, I don't like the idea of paying $50 for a section of hose that's that small (see picture on right). I may just go with a section of steel pipe there. I figure I can get a stretch of exhaust pipe bent for a few bucks down at the local Meineke and cut that to fit. It won't flex as much as a rubber hose, of course, but the inter-cooler mount is pretty flexible, so it may not matter. Regardless, for the difference in price, I'll take a run at the steel pipe.

I'm taking the afternoon off this Friday after working so much this weekend, so I'll have an opportunity to finish the inter-cooler stuff. Then, its finishing out the cooling system and thinking about an air filter.*stoked* . I should probably get 2 90* bends from Meineke so I can better assemble an exhaust. Just thinking that what I have now may not have enough material for welding. We'll see. I haven't heard from Hal, so I don't know if he'll be here on Friday or not. I have stuff to do regardless, but it would be nice to have a partner... and those bits he's working on really need him.