I made progress on lots of little things since that last post. First, I had a birthday. Woo hoo. The wife and kids took me out to a hockey game after a day-time cycling picnic. Great day. Then today, I sold off my old pancake engine. Quite a weekend. The engine sale should cover some of the cost of the Riviera pop-top I bought on lay-away from my friend Toby. Other than the engine, I took a big bite out of the intake (EGR elimination) and cooling system work that's left.

Pop-top for an engine 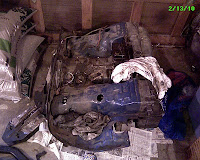 Like I mentioned above, I verbally agreed to taking Toby's old Riviera pop-top. In my last post I went into the what and why. I sold my engine with the idea that I'd be taking that money to Toby for that pop top. I'll still have to scratch together a little more, but I'm a good half-way there now. Harry got the engine for a steal, IMHO, but I want it gone, so my sick-of-it-being-there cost me some cabbage. Oh well. It'll run well for Harry, and at his price, I don't owe any explanations or anything if it doesn't run as well for him as it did for me.

Inter-cooler / Intake Progress
I got most of the pipe set to route from the turbo to the intercooler intake. I need a short section (2") of hardpipe to span between 2 thick rubber lines, and that end is done. I haven't given any thought to the air filter yet, but I know that is next after the intercooler-to-intake portion is completed.

Early on, I made the decision to omit the EGR (exhaust gas recirculation) system on the ALH engine when I installed it into the bus. First, it feeds sooty exhaust into a damp intake creating a sludge that eventually gums up the intake. When the hot dry soot hits the damp oily intake, we get goop. The oil comes from 2 places. First, there's the PCV (positive crankcase valve). The PCV allows for the pressure that builds within the engine to be released. Because this pressure is not pure air (it contains a little oil), the EPA doesn't want that vented into the atmosphere, so it is routed into the air intake. The second source is the turbo. As a part of the lubrication of the turbo, some oil gets into the air passing through. Since we can't eliminate this second source, we're left with the soot. I intend to run at least B5, so that should eliminate the soot that would have been routing into the intake at the time of combustion.

Eliminating the EGR
To cut the EGR circuit out of the process, there are a few different things that need to be dealt with. First, there's the EGR that's bolted onto the intake. This is pretty easily removed and replaced with a "race pipe". It should be noted that a vehicle that does have to pass emissions will be in violation of emissions laws if this is used. Once the intake-side has been removed, the exhaust end needs to be blocked off too. A plate can be constructed by tracing the gasket on some mild steel. Dieselgeek offers a kit for replacing the EGR and the exhaust bit. Link here. I also removed the EGR cooler. Dieselgeek has a kit for that too, but I'm not using their replacement for that. 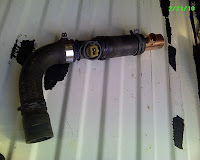 I changed the "upper" hose. I had just a simple run from the engine outlet to the radiator. I looked at the hoses that came with the engine and noticed that the upper hose has a sensor in it and the lower hose has a bleeder. I took the upper hose and cut it off just past the 90* bend. To that I tied in the sensor and then a copper 1-1/2" / 1/2" T so I could tie in the oil cooler. The picture to the right here is the completed "upper" before installing. After separating the oil cooler feed hose from the return, I cut it down to about 4" long and routed it between the cooler and the "upper" hose. Once I integrate a better 90* solution at the radiator, I will probably be able to eliminate 24" of hose I had laid out earlier.

Bleeder to Bottle lines
After the main hoses, the TDI engine has a secondary coolant line system. These hoses are about 3/8" and pull air bubbles out of the high points of the system back to the top of the overflow bottle. The stock setup connects at 3 points: from the head, from the heater-circuit and from the EGR cooler. Since I have completely removed the EGR, I will replace that connection point with on from the "lower" radiator hose. I was able to get the lines connected for the heater circuit and the engine head, and set up a "T" for the lower hose. I have a pretty good idea where the overflow bottle will go, so I'll be working on a bracket for that next.

Cabin Heat Delay Complete
I took the hose from the heating circuit return, cut it up a bit, and tied the heat input and output together. This closes that circuit for now. There's a bleeder already in place, so I should be able to come back at this at the end of the Summer for cabin heat without sacrificing anything right now.... especially time. 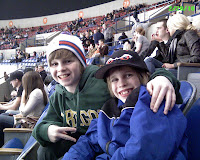 Once I get the race pipe kit from dieselgeek, I will be a short stretch of rubber away from having the intercooler work completed. That short stretch will have to bend 90* twice within a very short space, so this may not be easy. I will continue to work both of these aspects of the project, though, to reduce down time. I'm certain I will need another 90* bend of turbo-charged air supporting rubber and I have a bracket to fabricate for the overflow bottle. That is where I'll pick up next time.