There's not much to add this time. I didn't get much time on the project these last few days, but I was able ot get a little bit further on the radiator bracket. I also have an update on my son's H1N1.

Radiator Bracket I finished the last of the 4 separate brackets. 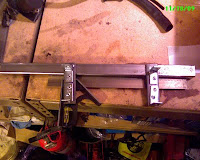 It went together like its twin on the front. After that, I put a bit of square-tubing across the front. After taking some measurements, and messing around with Google Sketchup, I have a working model of the underside of the bus. From this, I can conclude that I will have about 5-1/2" above the frame rail to play with. If I don't want more than 5 inches of drop on the front end, that gives less than 9 inches (after removing the thickness of the radiator) of possible exposure to air flow. I'll be getting under the bus this weekend, time and weather permitting. I hope to first figure out what to mount the front end to. Then, I'll start considering how I'll do that. I hav 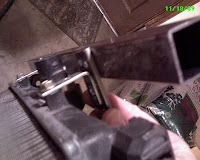 Front End Tie-In Ideas
First, there's the obvious bar across the beams and a couple of vertical-ish bars coming from the front of the radiator up to that cross-bar. Figure I tie-in some kind of rubber bit to absorb the vibration and torque-action on the body.
Second, I could put shorter vertical-ish bars up from the rad and connect to a cross bar (or eye-loops) with a short stretch of cable. This would make the pitch variable, so I could experiment a little.

Where Go Fans?
I could put fans under the radiator in a pull configuration. This seems to be the common thinking for best cooling, but wouldn't any water that passes through the radiator potentially get into the motor? I'm thinking that any time the fans would be in that condition, they would probably be turning on with some regularity, but its still so 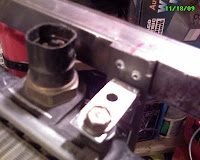 mething to think about.
Maybe the fans go on top in a push configuration. Then, any road debris could bounce up and damage a fan. Of course, if the fans weren't there, that debris would have damaged the radiator, so there will have to be some kind of security screening to protect the top of the radiator anyway.

Shroud Cowl
The picture that I linked in an earlier posting didn't have any shrouding at all. I don't know where his bus lives, so maybe it doesn't get very hot. I think I want at least some cowling on the sides and rear to prevent rad-heated air to re-flow through. In both of the design options above there would be a vertical-ish riser at the front on both corners. I'd need something at the rear to tie into. I'll have to give that some thought. Maybe it would just be a matter of careful cutting and I could re-use the shroud mount point that I'm using for the brackets. 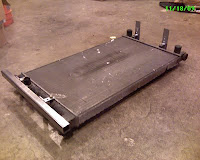 Cedar's H1N1
Well, Cedar finished his battle with the flu and was back at school today. He came bounding downstairs all dressed and ready to roll after over-sleeping for a school day. He made it to school only 30 minutes after the late bell. Thanks for your words of concern. We have no updates on Marianne or Tom. I'll post as we learn what's going on.