no new tales to tell

I've been working on getting my daily driver running right, and dealing with non-vehicle issues, so I haven't made any real movement on the bus since the last post. I've had some musings, and a little action, though, and I'll hit that today.

Harness
I did get most of the harness plugs identified, though. I also got an email from a reader in Kentucky that will be sharing his wealth of knowledge that he accumulated doing a conversion with an ALH engine. Same engine -> same harness. Unbelievable offer from him, and I'd been a fool to not accept it. Reading someone else's notes can be hard, but harder than trying to do all the research and making your own? Knowing that a notebook's worth of detail is coming has effectively ended my foray into identifying the plugs myself. I was able to discover that the harness still has the large relays for firing the original radiator fans. That circuit may be helpful when I get to the radiator.

Radiator Locating.... Again
This seems to be the open sore spot with this project. It shouldn't come as a gre 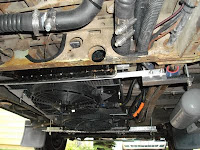 at surprise, though, I mean this was an air-cooled bus. Getting qualified opinions is hard, and getting flamed by purists is easy. There are a few brave folks out there, though, that have done this before, and I believe I am back in the under-belly camp. In the picture to the right, here, a member of theSamba has fitted a simple radiator concept under his bus between the frame rails. If you look closely, you can see that it has a slight pitch, but no cowling. He says that he doesn't have any overheating issues, though I can't help but wonder how the rad-heated air doesn't recirculate back into the radiator when idling at a stop light or in stop-and-go traffic. Regardless, I am going to follow this design example, and start assembling something very similar when I can get back to my usual schedule.

Cabin Heat
I've been thinking and talking to folks about the cabin heat too. Now, this is much less important, but having a means of running the defroster is important during Summer camping months too, so we can't just throw it away entirely. I'm thinking of using a flexi-hose (1/2" PEX) to get the coolant from the rear to the heater core. For a core, I have a vanagon rear-heater unit that I will be tying into the main air channel under the bus just behind the front axle. I need to determine an internal air-vent source, and I'm thinking of re-using the original Westy water vent hole in the floor right by the sliding door. I figure, I can put a simple round finned plate on the floor of the bus to pull cool air into the heat system without any new holes. Then, its just a matter of figuring out a flapper to control when to get interior or exterior air, and routing an exterior vent to a place that won't get a bunch of water in it. That can wait, for now.

Busaru
Our friend Dave, who is forced to sell his Subaru-powered bay-window bus, is still soliciting offers. He has not entered this decision lightly, and needs this capital to raise a legal defense. So if you have any interest in getting into a bay-window bus that has the benefits of a water-cooled engine (read: real heat in winter), and more get-up-and-go than modern Eurovans, please reach out to him. If it makes a difference, I'll try to help by taking the snow tires or the diesel heater (or both).

That's it for today. Lots of thinking, not a lot of doing... at least on Hapy. I Diesel Purged my Jetta TDI today and changed the fuel filter. I'm hoping that will resolve the fuel economy issue I've been chasing there. Otherwise, its the usual family time conflicts: Halloween (and the assorted parties), soccer games and practices, school stuff, etc. Crazy.

More next time. Maybe I'll have made some headway on the radiator bracketing.
Posted by PdxPaulie at 2:40 PM