Continuing the story of the 333-mile loop we did in mid-August. In part 1, I explained the plan, and the longest leg of the trip, from home to just south of Florence. Today, I'll cover the journey from Florence to Newport, happenings at Newport and then the journey through Lincoln City and home again.

Florence
I left off the last post with our departure from Honeyman State Park. We had a great time there, but it was approaching lunch time for most, and we had one rider who had skipped breakfast, so food was at the front of our minds. When we entered Florence on our way in a few nights earlier, we spotted a Dairy Queen, so we had a fail-safe. I wanted to see if there were better offerings before suffering the Brazier. Our patience was rewarded with an A and W car hop on the north end of Florence. We were fortunate to arrive just after someone else had left, so we could pull into a car-hop spot. I didn't think these things were still around, but not only is the place still standing, they still bring food out to you at your car on big platters that you can hang on your window. I wasn't sure that was a good idea with a nearly 50 year old bus, so we used the tray as a table inside it instead. They served the classic A/W root beer in heavy freezer-cold glass mugs, and the food arrived slightly wrapped in paper. Maybe it was because we hadn't eaten planned food in a week (no grocery store stops means you make up meals based on what you have, not from a plan) or maybe it was because we had worked a bit to get there, but those burgers and fries tasted fantastic. As we sat, we could better see just how busy they were. Inside the restaurant, there were no open tables and the line ran back to the door. Around the parking lot, there were no open spots, and there were motorists queued for the next open car-hop spot.

From Florence to Newport
Now fed, we could embark on the US-101 north to Newport. I hadn't driven this stretch of the US-101 in many years, but as much as other areas of Oregon have radically changed, this area is relatively static. The coastline is peppered with public beaches, but for the most part, the waterline is unreachable. The cliffs are too steep, or the terrain too rough for a road. Or, a path could be put in, but there's no place on the 101 to put a parking lot. As a result, there are long stretches of untouched coastline to enjoy out the window.

With all of the recreational vehicles on the road with us, there was little pressure to drive too terribly fast, making the drive all the more pleasant. The road is curvy, so even if the road had been empty, Hapy tips a little bit on corners anyway, so I wouldn't have been driving much faster than the current speed of traffic allowed. Hapy was running great. His temperatures would pop above 185*F for a quick second and then drop back down to 185*F as we climbed inclines or had to slow way down. Overall, though, his temperature issues of the past were quickly moving further into the back of my mind, as the scenery increasingly took over the front.

As I mentioned in the last post, we rented a house in Newport. Well, my sister Em did. We had her text the address to C, my navigator, so he could get us there. He had us take a left off of US-101 after we crossed the bay bridge into Newport and then he became confused. He asked me to pull over real quick and he asked a pedestrian "is there a skate park around here?". Hilarious. But, there was, and he had almost gotten us there. We were a block and a half away from it. We parked in front, nose pointing at the concrete bowls, and C jumped out, board in hand. K2 opened the slider, but remained on the lot couch while I wandered over to check it out.

Newport
This skate park looked like a combination of planned park and random construction. A few words from the older cat hanging out brought clarity: the city built it, and then the skaters added to it. For materials, they used whatever they could find plus concrete. Patio blocks? Check. Concrete slabs? Check. So.. that begs the followup question: how were the transitions? Well... you needed to plan for them. C worked the park, and while he did a car-load of locals arrived. Apparently, this was a super-hot day for Newport, so the locals would do a run and then pant in the limited shade. They all had an interesting style where they would look uncomfortable on their board, but then pop an amazing trick or fly out of the bowl and land it.. just to look unstable again after they had landed the trick and rolled a few feet. Maybe it was all of the home-made transitions. Regardless, I pulled up the address for the house, and it was about a half-mile away. We were early anyway, so C got his skate on. Once he was pouring sweat and ready to roll, we pointed south and within 10 minutes we were sitting across the street from the rental. 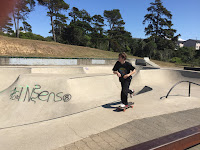 The rental was an odd, albeit large, 4 story house. The first floor was a separate apartment, but it was part of our rental. The upper 3 floors were, in order from bottom-to-top: more bedrooms with a bathroom, the main living space and a full-floor master bedroom. There was no yard, but there was a grassy park across the street with a big playground in it. It was perfect for the cousins, but no yard meant no tent for C and K2. Arrangements were resolved, and shifted each night as who was able to stay the night changed each day. Boo and I got a bed for one night, but honestly, we prefer Hapy so we stayed in the bus the other nights, and were grateful for it.

The family reunion was great. Boo and I had seen everyone within the last few years, but many family members hadn't seen each other in a very long time. For example, K2 had never met Chris, Rebecca's husband, and C hadn't seen him for close to 10 years. Lives get busy, and travel isn't the highest priority when there are colleges to pay for. Regardless, it was great to have that time, all in one place, for a few days so we could really re-connect.

Newport to Lincoln City
When it came time to leave, the plan was for the smaller, or more distant traveling families to pack and split, leaving the final walk-through for those who simply couldn't move fast. Boo and I were that last group, transporting the grandparents and teens. The plan didn't really work out that way, though, and we had all of the families all packing and leaving at about the same time. This made for a little extra chaos, but it also provided a little extra time to see each other. Ultimately, we were out by the appointed time, and the families went their separate ways... with Boo, K2 and the grandparents in K'Lack and me in Hapy with C, we headed north towards Lincoln City with hopes that this time Moe's wouldn't have a long line.

The drive to Lincoln City was as eventful as the drive from Florence to Newport. Hapy's temperatures stayed very level, he had plenty of power and the traffic didn't push faster than around 55mph anyway. We took the left to get to Moe's and could tell from the parking lot that things weren't looking very good. It was past noon, but still close enough to lunch time, even on a Wednesday, to create a crowd at Moe's. I found a spot near the door and C jumped out to find out how long the wait was... 40 minutes for a seating. Boo quick-conferred with the grandparents and we all decided to go to the McMenamin's Lighthouse Pub instead. Of course, McMenamin's isn't exactly known for fast service, but I figured that with the time to seat and then get food, we were still ahead versus Moe's.

Lincoln City no-start
After lunch, Hapy's now-typical 'starts the first time' didn't happen. I turned the key and nothing. I wiggled some wires behind the ignition switch and I could get the system to flip to "run", but "start" was still a no-go. Neat. With Boo, the grandparents, C and K2 watching, I simply pushed in the clutch, let off the brake, and roll-started by popping into reverse. Within a few seconds, I dropped into that 1200 rpm limp mode. Fun. I just puttered to an incline and roll-started him again. With concern about Hapy's limp mode issues and inability to start, we headed back to the US-101. He didn't drop into limp mode again, nor did we stop the engine again until we got home.

Homing
We made one stop after Lincoln City. There was a pressing need for road-bev's and a restroom so at the north end of Dundee, we stopped at the Chevron. I stayed with Hapy as he idled and C dashed into the store for a couple drinks for us. Other than the no-start in Lincoln City, Hapy continued to run like a champ. It was a hot day, and he was staying nice and cool. He continued to have plenty of power as well, and he demonstrated both on the long uphill between Newburg and Sherwood. I described this climb, and it's significance in my recent post (See Now Water COOLed), but I'll stress it again. This is the ultimate test ground for the success of the cooling system. Hapy has struggled up this hill on the way home every time we've driven it. Part of that is because of the length and height of the incline, but part too is because by this point, he has run for multiple hours and is already plenty hot before we start. This time, though, his temperature peaked at 194*F as we took the hill in 4th gear. Boo and I parted ways in Sherwood. I took Roy Rogers into Beaverton and she continued on 99W into Portland to drop off the folks. Roy Rogers has gotten very built up now, making this less and less of a quality cut-through. I may need to work the maps for something more interesting for next festival season.

Anyway.... 4 successful round trips, To celebrate, here's a clip from Sesame Street back when the painter was still part of the show. Yeah, showing my age here a little bit, but I liked this guy, back when the Count was spooky, the parents didn't know about Mr. Snuffalupagus, etc. Once they started PC-ifying all that stuff, they took some of the special with it. Anyway, 4 successful 300+ mile trips, totaling over 1200 miles without the support of a towing company nor AAA. Hazah!

By the way, the starter no-op was solved once I emptied the back of the bus and disconnected / reconnected the wires going into the TDI ignition switch. Something shook loose on the drive. Another argument to spend time this winter getting after the electrical: solving the 1200rpm issue with the accelerator pedal, the occasional issues with the engine not starting and maybe even organizing some of that wiring in the tire well. Nah... that's crazy talk :)

That's it for today. Thanks, as always, for following along-