In my last post, about getting home from the Newberry Event (See Newberry 2019 - Getting Home), I described my stop for fuel and that Hapy started acting funny within 20 minutes of that fill up. Today's post covers my investigation into the acting funny. I now had 4 codes getting thrown by the computer. I was getting just one code before (P0121), so with the extra codes, I feared I had bigger problems.
Before I start, today is C's 18th birthday.... C, it has been an honor being part of your life, and I greatly look forward to our years together as our relationship shifts, grows and deepens; you truly are an amazing person.

For posterity, the codes were:
p0121 - accelerator pedal position sensor getting funny readings. Causing a version of limp mode where we lock in at 1200 rpms
p1562 - injector pump quantity adjuster. Could be caused by the bad fuel, could be my timing is suddenly off
p1550 - discharge pressure is off. This is usually caused by a leak in the charged air system or in the vacuum lines.
p1403 - EGR malfunction. My vacuum for the EGR is closed off, since I removed the EGR for a straight pipe.
Remember, this is a '72 bus so emission control devices are not required. Before my fellow tree-huggers get all spun up, recognize that I run B20 so mathematically my emissions without the EGR are cleaner now than this bus was with the original gasoline engine. So... back off! Still, could be a loose vacuum hose. 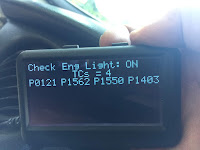 I figured I would approach the fuel system from front to back, meaning from the supply hose through to the injection pump. So, my first stop was the supply line coming out of the tank. Remember, back in 2011 on my drive home from Further, I was stopped by a blockage in my fuel tank (See Further - the Return), so I'm fairly familiar with this experience.. First, I put vice grips on the fuel lines to prevent fuel from going everywhere. Then, I disconnected the line from the clear filter and pointed the line at a fuel can. I removed the vice-grip from that line and fuel flowed easily out of the tank into the can. Gravity-feed tank checks out.

Check the Filters
While I was re-connecting things, I took a look at the clear filter. It was still clear-ish. Well, there weren't any cloggy-bits in it. So, with the fuel lines reconnected, I removed the feed line from the injection pump, leading from the "original" fuel filter. With the MityVac, I checked the fuel flow. Again, the fuel came out with very little vacuum applied. So, we have fuel making it to the injector pump easily. Hmm... So if the fuel filters are clear, and everything was running great up until it suddenly wasn't, I had to conclude that the fuel I got in Oakridge was the problem.

Drain the Tank
I raised the rear end of the bus enough to fit a 5 gallon bucket in front of the right rear axle (and under the fuel lines). I disconnected the supply fuel line at the "original" fuel filter, and routed the fuel into the bucket. While the bucket slowly filled, I removed the "original" fuel filter and drained it into the bucket as well. Once full, I clamped off the line, and swapped a second bucket underneath. I filled that bucket as the tank ran dry. I moved the buckets into the sun, and you could see the first bucket had cloudy green fuel in it. The second bucket was much more clear and less green. I interpreted this as the bad fuel settled to the bottom of the tank, leaving the older-to-me fuel floating on top.

So, what's this green fuel? I think it took this fuel those 20 minutes to settle to the bottom of the tank and then feed into the injection pump. I ran on that fuel for the remaining 150+/- miles home. By why green? Well, an underground tank can get water in it, either through condensation or seepage. If this happens for a long enough period of time, algae, fungus or other microbes can form. This usually happens at fuel stations with little traffic. I had ruled this out initially because this was a busy fueling station and there was someone getting diesel right next to me. Clearly, that doesn't matter. Whether this fuel simply had lots of water in it, causing the cloudy, or also had other matter in it, causing the color change, it had to go. The 2 buckets have been securely lid'd and will be taken to the toxic's section at the waste transfer station. I'm sorry I don't have a picture of the green fuel; I put the tamper-proof lids on before I thought to take a picture.

Since the "original" fuel filter is quite literally the original fuel filter that delivered with this engine over 10 years ago, this filter was long overdue for replacement. Yeah, bad owner. I had a pre-filter on there to help it last longer, but still... So, I looked around for a replacement, and noticed that all of the replacements needed one of those plastic thermotatic "tees". These things will re-route unused fuel from the injector pump back into the tank until the fuel reached 85* and then it sends it back to the fuel tank. My "original" always routed it back into the filter. This is to help the engine warm up in cold weather, and since I don't drive Hapy in cold weather, I decided I could look at the thermostatic "tee" style. For the filter plus the tee, it was around $70US. Or, I could upgrade the whole thing.

Upgrade? The standard filter filters down to 10-15 microns. That's great for most applications. If you drive in lots of dust (read: central Oregon where 4Peaks is), that may not keep everything out. For bulldozers and large construction diesels, they have filters that go down to 2 microns. Something that fine would protect the injectors from getting destroyed by particles in the fuel. Particles of, oh I don't know... algae or water or fungus? Anyway, I looked at a combination filter housing and filter, and I was able to upgrade for $75US, so $5US more. And, it's all made in the US. Of course, it's mustard yellow has this big CAT symbol on it, but it's hidden so I don't really care. For those shopping, the extra $5 was for the little barb/nipples that the hose fits onto. They are not included in the $70 kit.

The housing has dual source options, and a feed/return configuration. I went with the most simple: one feed, no return, and routed the injection pump overflow straight back to the tank. If the day comes that we want to drive Hapy in cold enough conditions where having the fuel get warmed up is necessary, I'll deal with that then. We will need to solve for his got-no-cabin-heat challenge before that.

Resolved
While I was in the engine bay, I noticed that the straight pipe which replaced the EGR had an issue. The pipe came with a nipple for attaching a gauge, and the little rubber stopper had split. This was letting out charged air, a potential source of the p1550. I replaced that stopper. After a few hundred miles of driving since, the code has not returned.

Now, with everything hooked back up, I cleared the codes and started up the engine. After some rough running, it settled down within a couple of minutes and sat idling at 900rpm. After a few minutes I got the check engine flash, but there is only one code (the one I had before): p0121 - the persistent accelerator pedal issue. I think it is a wiring issue where one of my splices is becoming inconsistent. I'll deal with that another time. The p1562 code has not returned.

So, that's it for the fuel system / bad fuel issue. Total cost: $165, but one of those fills should be considered part of just driving, so it's really $135. Since bad diesel can destroy injectors and injector pumps, the $135 is nothing compared to what it could have been. For example, a single injector could cost that much and a new pump could be up to 10 times that much. Of course, if the only damage was the injector nozzles, I could use this as an excuse to upgrade to bigger tips (like these) for around $180US. I'll be watching the engine behavior, regardless. There still could be an issue lurking.

Thanks again for following along-
Posted by PdxPaulie at 8:00 AM