The second half of the usual postings when we take Hapy somewhere interesting. My last post covered the travel part. In summary, it was great, but there were some things that shook out that need to get fixed before the next trip. For context, I had never seen this band before, but I had heard some concert footage, so I had an inkling of what we might expect. On to the show!

Pre-Funk
We arrived around 5. Since the gates opened at 530, we figured there would be some happenings to witness or partake in. We were routed to the parking lot near the Science Center, which I found odd, and we found ourselves in a small lot with a collection of Vanagons. We parked along the VW bus row, put up the pop-top, set out the colorful rug, the camping chairs and table and set to pre-funk. Our neighbor Vanagon had a big barbecue they had just fired up and while the scene was small, we had a tailgate vibe happening. Seeing how we were in the shadow of Autzen Stadium, that vibe was all the more appropriate. We were met by Boo's sister E and her husband H and, after a spirited beverage, we walked the short trail over the stream to the venue.

The Cuthbert Amphitheater max's out at 5000 people, but it wasn't completely full for Joe Russo's Almost Dead (JRAD). The very far corners of the upper lawn could fit a few people, but otherwise, the place was effectively full. It's a nice place, where everything is easy to get to, the lines are short and the view of the stage is really good. Even the pitched lawn isn't as steep as the lawn at, say, Shoreline in the Bay Area. I have only seen shows from the upper lawn, but I have heard that the seated area is really nice: flat ground for dancing would be especially welcome. We didn't arrive terribly early, but we were able to get s spot close to the separation between the upper and lower lawns, fairly close to the center,  but still over to Phil's side (stage right / house left) a little bit. Unlike when we went to Further here, there were a lot of teenagers this time. There were enough there for Boo to comment that the hippie cycle must be starting up again. Based on what we know of the EDM scene through T, "love" is moving in and "hate" is moving on. Very nice.

JRAD
The band was supposed to go on at 730, and they were fairly punctual. I hadn't been checking my watch, so they must have been within 20 minutes of their scheduled time. They started up with a smoking Althea that highlighted solo's from both guitarists and the keyboardist before rolling into a Truckin' that rocked. Crescendo after crescendo between the verses. They were riding another crescendo as they were concluding Truckin' and jump-stepped into Cassidy. One bar they were playing Truckin', the next Cassidy. Seamless. So good, and after a Tennessee Jed they closed the first set. "4 songs," you ask. Yes, 4 songs in an hour and they never stopped playing the entire time. The second set was a mind-blower, opening up with a Blues for Allah (King's Solomon's Marbles) and Here Comes Sunshine. The Help on the Way into Slipknot was super tight, but they raised the bar further with a drop into Feel Like a Stranger before continuing Slipknot into Franklin's Tower. The Franklin's closed with a classic Slipknot reprise. Again, they never stopped playing the crowd didn't stop dancing, and the back and forth energy was amazing. The set closed with a Good Lovin' and Mighty Quinn encore, but it was the Help-Slip-Stranger-Slip-Franklins that had my head shaking afterwards. 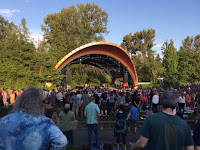 For anyone who wished they could have seen the Dead in their energy hay-day (1970's), when they would play marathon shows with super high-energy, you should check JRAD out. They have that youthful energy you can hear on those old Dead bootlegs, that Dead and Co can't get anywhere near. My opinions on Dead and Co are well documented (See Why Does Dead and Company Suck?). Seeing the Dead songbook get lit up like I'd never seen before just further underscores the mediocrity of Dead and Co. So, if you want to reminisce, play remember-when, cram into a huge crowd and see something mediocre-bordering-on-bad for upwards of three-digits US$, by all means go to Dead and Co. You've been warned; if you already have tickets, I'd suggest you do the lot scene and scalp them to someone less informed. If you want to hear what those songs are supposed to sound like, witness some amazing solos, vocals that are on-key and energized, and get your back broken by some jams that will dance you into traction, go see JRAD. It will cost you less, the venue will be smaller, and it will blow your mind how good these songs can sound when they're played by skilled, young, inspired musicians.

Post-Funk
With Quinn echoing in our ears, Boo and I sat with E and H. We all glistened with sweat from dancing, though the warm day had long turned to cool evening. The crowd started to make their way to the exits, each looking a little dumbfounded. Or maybe it was the drinking and smoking that created those vacant stares. No matter. We joined the throng working their way to the exit, and could overhear conversations, elated over certain aspects of the show.

The lot scene outside, though, was nothing like the "old stadium days", at least not the little lot we were in. The crowd disappeared rather quickly. So, while Boo and I scarfed down a salad, our neighbors would wave and drive off. Maybe the Shakedown Street was on the other side. Maybe there wasn't one. It didn't matter, really. No one hassled us out of the lot, so we enjoyed our cool down, and rolled away when the mood was right. In retrospect, for all I know the lot scene in the 70's was more like that.

I can't say enough about how good JRAD was. We loved Further, but their energy was different too. Further was more of a revival-meets-reunion kind of energy. Just love, and happy to be here while we play our favorite tunes in a nice-to-hear way. Great vocals and JohnK's guitar work was amazing. JRAD is such higher energy, raging guitar solos like the way Warren Haynes shredded when he toured with "The Dead" 10 years ago. Now, add a guitarist who can add bits like an Allman brothers musical interlude like JRAD has. That's special.

Thanks, as always, for following along. More Summer music fun ahead.
Posted by PdxPaulie at 8:00 AM