Today, I'm going to geek out on our Pacific NorthWest snowfall this season.

Snow in the Mountains
Last Summer, the weather folks were calling for a La Nina pattern to develop over the late fall. This usually means the Pacific Northwest is colder and wetter than normal. If you don't live here, nor watching weather patterns here, let me tell you: they nailed it. Mt Hood, our local 11,000+ foot high mountain, has an incredible amount of snow. Based on the historical data, Mt. Hood is way ahead not just of average, but of historic highs. Based on the decade graph, most years Mt Hood has around 115' of snow. To date, they have over 150' and we have another month before the traditional snow pack peak. Snowfans (like me) are thrilled.

Rain in the Valley
There's a saying around here: "rain in the valley means snow on the mountain". It's usually true. This year, being a complete departure from normal, snow on the mountain could mean snow in the valley. To wit, Portland Public Schools closed for 9 days due to weather. Between the heavy snowfall, lack of plows and extended cold days, the snow became ice and travel actually got worse before it got better. We have also had multiple sub-freezing stretches which did not have precipitation. While that's not really a travel challenge if you're in a car... it is if you're in an old car or, as has been my case recently, riding public transit. Standing on a train platform in a stiff wind and below freezing temps is reality for so many. It's quite humbling for those used to driving every day (like I was).

Batteries Lost
On a personal level, standing on a platform wasn't really the biggest impact. Of our fleet of cars, we lost 3 batteries to the cold. I'm sure you're reading this and thinking "aw, the cold didn't do it". Maybe. All I know is these cars ran fine and then we didn't run them because the snow piled up and we didn't want to drive them on the ice. Next time we went to start them, they wouldn't start and wouldn't take a charge. In two cases, we took the batteries to Les Schwab and they confirmed they were in need of replacement. Honestly, I don't trust shops who benefit from giving you information that they generate themselves. But, I tried to charge them, and the charge wouldn't stick at home, so I figured they were all goners. The third one took a jump and after jumping it a few times (more like after taking a long drive), the battery is working correctly again. Still, we're thinking about replacing it anyway. 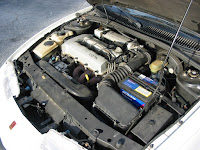 Funny thing how time just slips away. The cars who lost batteries were obviously not cars we drive all the time. Dude, our old Saturn, is on the block for selling this Spring. Getting the old battery out isn't too bad, but the new battery sat for a week before K, our now 21 year old, came over and installed it. It is literally 3 bolts holding it in. K needed to borrow the car, so he had the motivation that I lacked. The other dead battery was for our beloved microbus. That battery still hasn't been installed. Part of it is laziness, part of it is not really planning to drive him until the weather improves and part of it is that I've been distracted with a few different things. I'll go into those eventually.
Posted by PdxPaulie at 8:00 AM