Santa Clara by way of Wheeler

While so many folks around the San Francisco area were celebrating the Supreme Court decision to allow same-gender marriages, deadheads looked to the southern end of the SF Bay to the final pair of concerts to be performed by the guys who used to be called "Grateful Dead" on the West Coast. The well-heeled or well-connected got tickets at exorbitant prices while the rest of us watched with wonder... through $100 worth of simulcast access. Today's post is about how I saw the Santa Clara shows with some family and friends, complete with a bus repair adventure!

Getting Out
I've mentioned the MT3. Up until late Friday evening, our plan was to take a car and a bus (8 people) to my friend Mayhem's place in Wheeler to camp in the bus for the Santa Clara shows. As the evening got late, though, it was clear that Boo needed to stay home to get some work done and the MT3 wouldn't be going. So, rather than 8, only the older 3 boys (T, C and K2) got to go. My boy's mom got herself tickets, travel and hotel (once the support check clears, no one really knows where the money goes, do they?) to get down to the show in person, so T and C knew a little bit about the shows' significance. Saturday morning, I got up like it was a workday. I hit the grocery store for supplies, and loaded the bus. We were loaded with fuel and ice and ready-ish to go when Grateful Ed arrived with Belle.
MPG note: 35 MPG since the last fill. That's high, but should we factor in the top-off? 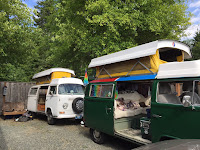 With 2 boys in the middle row and T as my co-pilot, we set off following Belle to US26. As always seems the case, we were met with smiles and waves as we passed. Or, more often, when we were passed. Hapy ran great again, through troubled traffic between the US26/OR6 interchange through the US26/OR47 interchange. It's pretty farmland out there, but someone did something they weren't supposed to and for a stretch that should taken about 10 minutes, we slogged for over almost an hour and a half. In intense sun. Where no AC means hot driver. Still, the traffic let up just past the Dairy Queen in Manning, and we got back to normal pace: 55 downhill, 35 uphill. We proceeded like that through the Coast Range to the US101 interchange and down the 101. Just before Hug Point, Belle pulled into a view area with a deep lot. Driver Ed was hungry, so we parked with sliders facing each other, popped the tops and broke out the hoagies. 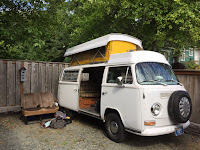 No sooner did we shut off engines than the folks who had been taking pictures of the ocean were now taking pictures of the 2 buses. Of course, I should have too, but I was hungry... and then the small crowd formed, and there were questions to answer, and such. There's s great line in The Bus Movie about a menu of things you can ask, and how much you get to pay for the driver to listen to the question and maybe answer. Very funny, but I love talking to folks about the bus. You have to, if you're going to drive one. After the last visitor left, we fired up the buses and completed the few miles to Wheeler. I'd never been on the stretch of US101 just south of Manzanita before; it is very pretty and seems less touched by the micro-mansions that have appeared along other areas of Oregon coastline. As you pass through, do remember: the stop sign in Nehalem is right turn permitted without stopping. It creates quite the stir among the locals when someone stops and confuses everyone :)

Casa Mayhem
We arrived to two little Mayhem's watching the Octonauts with Grampa Mayhem. Some times, arriving at someone's house can be like arriving home, and Mayhem's felt that way. The boys settled into the easy conversations between familiars, and before long we were trading stories and laughing. Grateful Ed broke out the flags that usually adorned Belle and presented them off the front deck while I readied Hapy for "camping". The boys decided to sleep on the front deck with a view of the bay to wake to. Great choice. Once our sleep arrangements were set, we grilled up our traditional post-Jerry music food: meat snax. There's nothing quite like grilled steak in small bite-sized chunks, only improved by chilling after cooking and then service cold. Yummy.

With food in hand, we fired up the simulcast of the Dead show going on in Santa Clara. The fine folks at Jambase (see here) have a much deeper set list and opinion piece about the performance than I could possibly create. I don't agree with their glowing report, though. I thought most of the performance was mediocre, the vocals thin, and the timing was off. There were a few missing pieces: first, none of them would assertively lead. Bob would try to get Trey's attention after he disappeared into his guitar solo (staring at his feet), only to become frustrated and give up on the segue. They almost gave up on the Eleven entirely. I would agree that the show-ending Morning Dew was pretty good. Bob found his vocal strength in time to nail that number. The encore Casey Jones (lead-vocal by Bruce Hornsby) should have reminded everyone that he has a great voice, and that was what singing in front of 80k people was supposed to sound like. The vocals was another missing piece. Furthur used to travel with backing vocalists to help make the sound fuller. Without them, the vocals were thin and pitchy. The last missing piece was the ability to either segue or stomp and ending. Most of the songs just petered out, especially in the second set. Lots of miscues and bumbling endings. Overall, those at Casa Mayhem reflected with memories of plain-Jane shows of years past, or some of the performances during Jerry's last year with us. Not good, but always hope for another day. Like the next day...

Sometimes, the Dead was a Jekyll and Hyde routine. One night coming out flat and disinterested and the next night firing on all cylinders. With a train-wreck in the rear view mirror, we hoped for Dr. Jekyll on Sunday. We got something close to it. The JamBase folks liked it too (see here), but I think they again oversold how good it was. To their credit, the band tried much easier songs the second night, increasing confidence in the singers that Trey wasn't going to screw it up. Also, Trey pulled his head out of his ass and looked at the other members of the band for cues. There were still plenty of awkward endings and missed transitions, but the meat of the songs went well. Unlike the first night, when it felt like any song could fall apart at any second, the songs held together well the second night. The first set had many more songs sung by Bruce Hornsby and fewer sung by Phil, also good. The Death Don't Have No Mercy was probably my highlight of the 2-night run.

Like the night before, we wished John Kadlecik had gotten the gig, but after Kreutzmann's comments in late 2010, it comes as no surprise John didn't get the spot. Well, Billy, your chickens have come to roost. Warren Haynes is great, but John had the right vibe for the spot. If the band intended to do more than 5 shows, do a tour or two, for example, I could see the point in working with Trey. Eventually, he could be pretty good with this group. I don't think there's enough time for the band to fully gel before the final note in Chicago, much less before the first. I'll be watching anyway, because with Phil and Bob, you just never know. They've pulled some magic before.

Pair of Jacks to Open 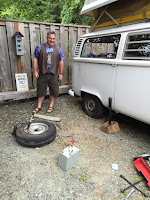 Between the two shows, Grateful Ed noticed that the right rear tire on Hapy looked awfully low. He was right and it seemed like a simply fix, what with the full-sized spare sitting on the nose. While everyone else lounged about, I pulled out the BusDepot jack and started raising the bus. Within a few minutes, the jack got much harder to raise, but we couldn't tell why. Soon thereafter, the handle of the jack broke off. Drat. Good thing Belle is here with her original (40 year old) jack. Before we started this time, though, we pulled the sleeping bags and tent out of the back of the bus. Not much weight, but we figured it was better safe than sorry. The jack went in, the bus started to rise, and then the part that slips into the jack-point split in two. One flat tire, 2 broken jacks. So, we dug into the trunk of Mayhem's modern Lexus SUV for a third option before resorting to AAA. Since it didn't fit into the jack-point, we tried something entirely different: putting the scissor jack under the rear hub where the shock absorber is bolted. the wheel left the ground, and I was able to get the rim off the hub, but I couldn't get the tire and wheel out from between the hub and the rear wheel arch. 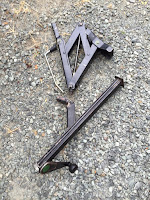 Now, we're really getting that Dead parking lot feel: solve with people. We arranged everyone around the rear corner of the bus, grabbing rear bumper or the underside of the body and lifter together while I quick pulled the tire out. The new tire, with much more air, couldn't fit in the same way and the hub was too low even if it could fit. We needed to raise the bus more, so we team lifted while Ed turned the screws on the jack. After a few attempts, we had it high enough to slip onto the studs. I threaded the nuts on while Ed lowered the jack. The boys quickly disappeared on their skateboards.

Homeward
We left shortly after the second show ended. In fact, the show ended a minute or two after 11 and we were on Hwy101 before 11:30. We arrived home a few minutes after 1:AM this morning. Hapy drove like a dream. With a low purr, he took the hills well, carved the fog and never broke 192*. I had the opportunity to try the new windshield washer, and it works great, mechanically. I need to adjust the spray pattern: it currently shoots straight up, so if I'm driving fast enough, it ends up on the windscreen... sort of.

That's it for today. Next weekend, the Dead invade Chicago, and I'll be there by way of Grateful Ed's back yard broadcast, camping music festival style under the trees. As always, thanks for following along-
Posted by PdxPaulie at 10:30 PM

Great! Nice write-up. Looking forward to the next run! Whooohooo!