It's been an interesting week, but aren't they all. My concerns about available time once school started were well-warranted as I really didnt' get much wrench-time. Considering all the interrupts, tangents and distractions, I'm calling this week a win just because I was able to maintain some project inertia. I'll post more on the fuel tank solution later this week, but I touch on what's happening with the most recent twist. I have a small bit on the oil cooler and on prepping the turbo for re-install to finish out today's post. Of course, I added a picture of Mike navigating us South in sepia 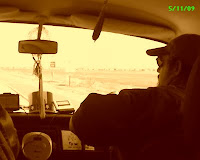 tones and a shot out the window along the Columbia River.

Tank Update
I was able to solicit and aggregate opinions on the diesel fuel tank under the rear seat. Now, it seems everyone agrees there's nothing legally wrong with putting the tank there, we all seem to feel the same visceral discomfort when we imagine children sitting a-top the bench during a crash. I spent time Sunday undoing everything I had done to get the WestMarine tank under the bench. Honestly, that WestMarine tank would serve very well as a water tank, and if they don't accept it as a return that's what I'll use it for. 12 gallons of water might be handy when we're off-grid camping somewhere. Regardless, I got the Westy interior back to where it was, put a bunch of accumulated tools and parts away and got to a place where Hal and I could work again.

Oil Cooler
Unfortunately, Hal hit a scheduling snag and couldn't join me, so, I redirected onto buttoning the "engine holes" back up. This consisted of cleaning the oil:water heat exchanger and remounting it. As an aside, I did some research on this "oil cooler" and it seems the TDIClub folks are very keen on this bit of equipment. This bri 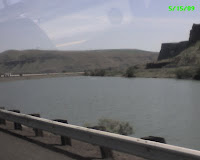 ngs the oil and coolant temperatures nearly equal, so keeping the engine as a whole at "normal operating temperature" (NOT) is realized. Once external oil coolers are introduced, it is harder to reach and remain at that point, so the decision to scope-out the external cooler turns out to be a good one. The key is getting adequate cooling for the coolant via the radiator. Now, if I can figure out a way to use that external cooler to cool the transaxle oil, that would be great.

Turbo
I tightened down the intake and the vacuum pump and I set to work on the exhaust / turbo. This large unit had considerable surface rust on the iron parts, so I hit it with rust converter. The turbo and the waste-gate actuator looked pretty good, so I just cleaned them with a simple cleanser. Last, I masked off the iron so I could shoot it with some engine block / exhaust manifold paint. It will look better, but I really hope this will stop the rust. Just trying to follow the simple Navy rule: if it don't move paint it.

This week, I'll be focused on the fuel tank again. As I said above, I'll post on that once it is in place. Regardless, I would like very much to have the engine back in so Hal can resume his work next Sunday. Even though we're supposed to hit an unseasonably hot 90* today, the rainy season should open in less than a month, so the pressure is on.
Posted by PdxPaulie at 1:41 PM