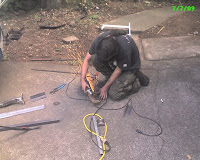 rear engine mount last night. Here's a picture of him working the hand-grinder. His design is really very nice. There's a rectangular bar running across the rear of the engine bay from frame rail to frame rail. That mother is heavy. It is welded to 2" angles that were cut and drilled to re-use the bolt-holes that the bumper bracket threads through. As a result, there are no new holes, no cutting of the bus. The mounting bar has slots instead of round holes so there is some flexibility for mounting. The bar floats about an inch in front of the rear apron. This weekend, he'll finish by fab'ing a tower on the bar to get up to the stock TDI engine mount.
I pretty much stayed out of the way, and held stuff when an extra hand was needed. Otherwise, I popped a rivet onto the triangular pop-out driver's window, and messed 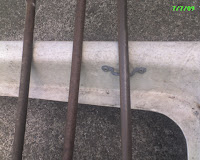 with the luggage rack. Like I said before, that thing was dirty, and the bars nasty. They all had some surface rust, so I sanded them down, did a Naval Jelly treatment and shot them with Eastwood's Tank Tone product. It was the only gray or silver paint I had, and I figured the high zinc content wouldn't hurt. I'll push a picture of the painted bars, but in the meantime, here's a picture of a pre-sanded (the 2 on the left) and a post sanded bar (the one on the right).
I don't expect to make any additional headway until Friday. I still have a garage full of stuff that didn't go during the garage sale. Apparently, the Salvation Army won't tell you when they're coming, and so unless you wait around all day, you miss them. Great. I guess I'll be hauling that stuff down to Goodwill so I can get to my ATV Jack. I need / want to get the fuel tank in and he engine back in place before we finish the mount work, but I'm starting to think that may not happen. More next time,
Posted by PdxPaulie at 12:16 PM

The fuel tank re-install is Yet Another Reason the mounting bar is being built as a bolt-in.